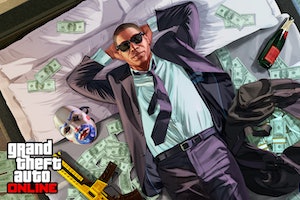 Grand Theft Auto 6 might be the most expensive game in franchise history.

No, we’re not talking about its budget, even though that could very well turn out to be true. We’re talking about how much GTA 6 will cost consumers on retail and digital storefronts. The game hasn’t even been confirmed by Rockstar yet, so it’s a bit early to discuss pricing. Yet comments from the Take-Two Interactive CEO in March 2021 make it seems more likely than ever that GTA 6 will cost a whopping $70.

This falls in line with the pricing models we are starting to see for most big-budget AAA games coming into the PS5 and Xbox Series X’s console generation. But it still makes it the priciest GTA to date.

Earlier in March, Take-Two Interactive CEO Strauss Zelnick appeared at the Morgan Stanley Technology, Media, and Telcom Conference. Take-Two owns GTA developer Rockstar Games, so Zelnick received questions regarding the announcement of an all-but-offically-confirmed sequel. Still, Comicbook noticed a comment from Zelnick that could indicate the pricepoint for GTA 6.

“We announced a $70 price point for NBA 2K21, and our view was that we’re offering an array of extraordinary experiences, lots of replayability,” he said. “And the last time there a frontline price increase in the US was 2005-2006, so we think consumers are ready for it.”

Zelnick hedged this comment by saying, “We haven’t said anything about pricing other titles so far, and we tend to make announcements on a title-by-title basis.” But he still said that Take-Two wants to “deliver more value” with its games. Basically, the most popular and replayable games will be priced accordingly to increase overall profits for Take-Two.

While some smaller games from Take-Two publishers like 2K or Private Division may stay at a lower price point, Take-Two plans on charging $70 for the AAA games that get the most attention and have the most significant post-launch support. As GTA 5 is still played by millions to this day, one can easily assume that GTA 6 will end up in that $70 category as well.

Now that we’re in the new console generation, average prices have increased for the first time in over a decade. While Xbox and Nintendo’s games are still $60 for now, Sony charges $70 for PS5 exclusive games like Demon’s Souls, Returnal, and Ratchet & Clank: Rift Apart.

Meanwhile, Take-Two and Activision charged $70 for the next-gen versions of games like NBA 2K21 and Call of Duty: Black Ops Cold War. We expect this higher price point to get normalize over the course of this console generation, so it won’t be much of a surprise if GTA 6 winds up costing $70.

Obviously, GTA 6 has yet to be officially announced or given a pricepoint — the next-gen GTA 5 port doesn’t even have one — so this is just speculation based on Zelnick’s comments. Still, don’t expect GTA 6 to be a cheaper game, even after a 2020 Kotaku report called the game “moderately sized.”

We wouldn’t expect anything less from Rockstar, who always goes big and bold with its games.

GTA 6 is reportedly in development.