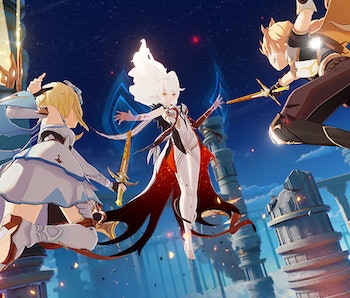 Genshin Impact boasts a remarkably vast open world for players to explore. There's so much too see and so many monsters to smite, you might just want to bring an IRL friend or two along for the ride. The new RPG from developer miHoYo lets you team up with three of your pals to hunt for treasure and challenge threatening foes. However, you won't be able to play with your friends until you increase your Adventure Rank, and there are few limitations to co-op play you'll need to bear in mind.

Here's what you need to do to unlock the multiplayer functionality and invite your friends to join you in exploring the world of Teyvat in the free-to-play adventure.

How to unlock multiplayer in Genshin Impact

This is not the same as your Character Level, which is increased using consumable items. If you're playing on PS4, you can check your adventure level quickly by pressing the Options button to bring up the main menu. Below your name and signature, you'll see your current Adventure Rank.

Here's how to increase your Adventure Rank and earn Adventure EXP:

WE WANT TO HEAR FROM YOU! TAKE THE ULTIMATE ZELDA: BREATH OF THE WILD 2 SURVEY NOW.

How to play with friends in Genshin Impact

You can add up to 45 friends in Genshin Impact, but you can only play with three at a time. To invite friends, access the main menu (via the options button on PS4) and select Friends. Tab over to the second menu, which shows two people and a plus sign. From there, you can add friends by inputting their nine-digit UID number. (You can locate your own in the main menu, just beneath your character portrait.) Once added to your friends list, you'll automatically see when your pals are online.

Here's how it works, depending on the size of your squad: If you're only playing with one friend, you'll each have two party members to swap between. With two friends, the host will be able to swap between two chracters, while each guest gets one. If you've got a full foursome, each player controls one character.

There are a few limitations to co-op play to bear in mind. As previously stated, you can only invite three friends at a time. You also won't be able to progress the main story in multiplayer mode, so leave the Archon Quests for your solo sessions. Finally, your guests won't be able to open chests, make offerings to Statues of the Seven, or collect key items while they're visiting your world. So don't forget to share the wealth by rotating host duties among your friends!

Genshin Impact is out now for PS4, PC, iOS, and Android.