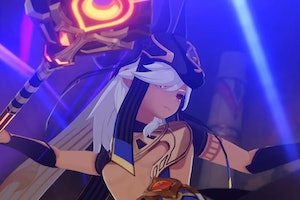 Cyno, the General Mahamatra, tracks down and punishes rulebreakers of the Sumeru Akademiya. He holds the virtue of academic integrity above all, which bleeds into his overall personality and worth ethic. Naturally, that means he’s not someone worth picking a fight with. Lucky you, if you happen to have him.

Cyno just arrived (alongside 4-star Candace) in Genshin Impact 3.1 , so it’s time to farm for the materials that weren’t available in Sumeru’s rainforest regions. Many of his character and talent ascension materials are found in the newly opened desert area.

Here’s what you need to farm to raise Cyno to the highest level.

These Ascension Materials are based on the early leaks plus what players have been able to see after pulling Cyno in the game.

Where to find Vajrada Amethyst

Vajrada Amethyst comes from multiple bosses including the Electro Hypostasis and Raiden Shogun boss. However, the Electro Regisvine is the best outlet because Cyno also needs its Thunderclap Fruitcores. For reference, these are all the bosses drop Vajrada Amethyst items.

Where to find Divining Scroll

Divining Scrolls and their rarer counterparts are typically found by beating up Samachurls. Those are the staff-waving Hilichurl variations that have an element associated with them like Electro, Hydro, or Dendro. You probably already gather Scrolls naturally from fulfilling Daily Commissions. However, if you need even more scrolls, pull out your Adventure Book and look them up in the Enemies section so that you can hunt more of them down.

Where to find Thunderclap Fruitcore

Thunderclap Fruitcores are Electro Regisvine drops. Thankfully, the boss doesn’t need a prerequisite quest to unlock. Just walk up to the purple flower monster icon in Sumeru and start a fight with the boss. Each fight will yield two or three Thunderclap Fruitcores, so you need to defeat the Electro Regisvine 16 to 23 times and spend between 640 and 920 Resin in order to raise Cyno to Level 90. Based on the 160 Resin cap, that should take approximately 4 to 6 days.

Where to find Scarab Beetles

My condolences to anyone who has to farm Scarabs for Cyno. It’s like Onikabuto for Itto again. The western desert side of Sumeru just opened, so many Genshin Impact players are still tracking them down. YouTuber KyoStinV was one of the earliest content creators to push out a reliable video guide, though. One viewer also shared the map from their video on Twitter for reference.

Note that many people stop before Level 10. Even in Genshin Impact trial runs, the test character typically only has their talents raised to Level 8. The fact that there are so few Crowns of Insight also discourages players from using them on every character.

Where to find Admonition books

“Admonition” books and other Sumeru ascension books can be found in the Steeple of Ignorance domain in Sumeru near Chatrakam Cave. Its farming days are Monday, Thursday, and Sunday.

Where to find Mudra of the Malefic General

Mudra of the Malefic General is one of the drops from the Raiden Shogun “Magatsu Mitake Narukami no Mikoto” Weekly Boss. The only other character who uses it is Kamisato Ayato.

Raiden Shogun has three different boss-specific drops, only one of which is the Mudra of the Malefic General, so you might not even get one every week you fight her. Alternatively, you can convert her other drops into the Mudra of the Malefic General if you have Dream Solvent to spare. Just select the items for alchemizing from the nearest Alchemy station and convert.