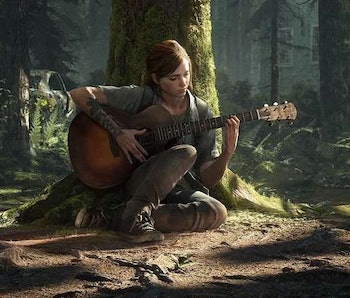 Gamers continue to celebrate and debate The Last of Us Part II, but some among us are already looking for the next thrill. If you're longing for more Last of Us-style stealth/adventure gameplay, these modern classics are just the thing to scratch that itch.

We only recommend products we love and that we think you will, too. We may receive a portion of sales from products purchased from this article.

Last of Us is one of those "zombie" series where the word doesn't necessarily refer to a shambling, George Romero-style brain eater, but rather a macabre mutation of the human form. It's great if you like a hardy spine chill. For continued gaming jeepers, check out Resident Evil 2: Remake. You'll get a good jump scare at every possible moment.

Even if you've already played the original Resident Evil 2, the 2019 remake dreams up a terrifying host of new scares. Everything has been modernized, making the experience feel completely fresh. Outside of being a horror game, Resident Evil 2: Remake is a straight-up great game.

One of the coolest things about Last of Us is how it takes multiple perspectives into consideration in forming an overall narrative. Dishonored 2 does the same thing, allowing you to play as both Corvo and his daughter, Emily. Each has a different playstyle and dialogue, allowing you to get a complete view of the world they live in.

Dishonored 2 also features some of the best first-person stealth in gaming. If you were fond of sneaking around in tall grass and under cars as Ellie, you'll likely find Dishonored 2 highly satisfying.

This collection includes every narrative nugget in Telltale's point-and-click adventure, The Walking Dead. The collection starts with the acclaimed first season and goes all the way up to the recently completed Season 4. If you play through the whole series, you'll notice hefty thematic parallels with both Last of Us games. Like the first Last of Us, The Walking Dead Season 1's primary focus is the emotional relationship between a young girl and a father figure she acquired during the apocalypse. Like Joel and Ellie, Lee and Clementine have an equal number of parental moments as zombie apocalypse survival teaching moments.

Like Last of Us 2, The Walking Dead Season 4 is themed around legacy. It asks what you owe to those that raised you. Is it inevitable that you'll fill the same role they did? If you want to feel those heavy emotional beats provided by either Last of Us game, this is the collection for you.

If while playing or watching Last of Us 2 you've thought "Wow, Naughty Dog sure has improved since the last one. What happened?" Uncharted: Lost Legacy is what happened.

The game unites the gameplay innovations showcased in The Last of Us and Uncharted 4, executing everything in one nearly perfect title. Series lead Nathan Drake takes a break from the limelight, and instead the game focuses on heroines Chloe Frazier, Nadine Ross, and Sam Drake . The game is bite-sized, taking around nine hours to complete, but it includes all the classic Uncharted beats. Lost Legacy also grants you access to Uncharted 4's multiplayer servers, if you still want more.

There's something about using whatever means necessary to defeat a nearly unstoppable mutant enemy in Last of Us that's absolutely thrilling. That whole David vs. Goliath vibe permeates Horizon: Zero Dawn, as you try to best numerous gigantic mechanical beasts with a tricked-out bow and arrow. You'll often find it terrifying to fight robo-animals larger than Carnegie Hall, but that's the fun.

You'll have to be resourceful by utilizing trick arrows to take down your foes. In addition to the robots, you'll also fight a militarized cult that's not unlike the Seraphites in The Last of Us 2. The complete edition will also come packaged with The Frozen Wilds DLC, facilitating a full exploration of the world before Forbidden West launches on PS5 next year.

Playable characters in Last of Us are so satisfyingly effective in combat. If you're good at the game, you can stealthily defeat an entire squadron without a scratch. While you can't explicitly kill anyone in Batman: Arkham Knight (though he's is definitely injuring them for life), you'll be able to expertly corral foes in much the same way. Similar to Last of Us 2, Arkham Knight also focuses on the lead character's struggles to reconcile the ghosts of his past.

Gotham City is expansive, it's hard to grow tired of patroling the for minor crimes or the numerous lengthy side missions. When you do complete everything in Story Mode, there's a combat trial mode, allowing you to relive your favorite gameplay aspects at your leisure and encouraging you to try new techniques. The collection also comes with the first two games in the Arkham franchise and all the accompanying DLC, making for such a good time that you'll go gleefully batty.

More like this
Gaming
6.21.2022 4:27 PM
Everything you need to know about Crisis Core: Final Fantasy VII Reunion
By Hayes Madsen
Gaming
6.17.2022 4:00 PM
The agony and ecstasy of PlayStation trophy hunting: "It's a huge drop of serotonin”
By Joseph Yaden
Gaming
6.24.2022 4:00 AM
Here's how to choose the best house in Fire Emblem: Three Hopes
By Hayes Madsen
Related Tags
Share: