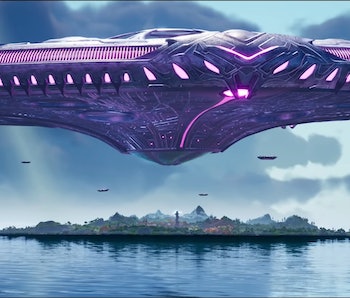 Fortnite Season 7 is officially underway, and among its litany of new features and the reintroduction of Battle Stars is a brand-new skin customization system that requires Alien Artifacts.

In this guide, we’ll explain how Alien Artifacts work and detail five guaranteed locations you can use to find them during Week 1. The Invasion is here, and we want you to make the most of it.

What Alien Artifacts do in Fortnite Season 7

When first launching the Season 7 update, you’ll be prompted with a message that briefly describes the central premise of Alien Artifacts. They can be found at specific spots across the Island or inside Cosmic Chests. When you find them, they can be used to customize the tier 1 Kymera skin in as many as 800,000 different combinations.

As seen below, there’s a wide variety of possible choices for Kymera’s various body parts, with each one costing a small purse of Alien Artifacts to unlock. All told, that’s about as complex as the basics of the system get.

How to find Alien Artifacts in Fortnite

Now that you understand what Alien Artifacts are and how to use them, you’re probably wondering how to get them. As of right now, the easiest way to do that is by visiting five specific locations on the Battle Royale map that will presumably change from week to week. Something special worth noting is that these Artifacts can even be collected in a Battle Lab as long as you change the loot pool option to anything other than default.

Given that Season 7 just started, here are the Alien Artifact locations for Week 1.

This is what the spot looks like when you land there.

Alien Artifact location 2: The second artifact can be found west of Catty Corner.

It’s on the first floor of this two-level tower.

Here is a screenshot of the location.

Alien Artifact location 4: The next Artifact is at the Spire, which is now found northwest of Believer Beach.

Just head a little ways up the spiral, and you’ll come to this canister.

It’s in the fields across from the farm house.

Each of these canisters actually contains four Alien Artifacts each, so you should come away with 20 total Artifacts if you’ve collected all five.

What about Cosmic Chest locations?

The initial explainer also mentions that Alien Artifacts can be found in Cosmic Chests as well. These only spawn in Duos, Trios or Squads and require assistance from all team players to open. They’re most commonly found after the first three zones, and they look like futuristic cubes.

To open one, you and your teammates must take turns hitting the chest in the marked spot with your Pickaxe. This rotation can occur several times, so you’ll need to be in a safe space to finish the process. Once the Cosmic Chest cracks open, you’ll get a few artifact canisters and some high-tier loot for your troubles. These spawn in many different locations across the map, similar to standard loot Chests.

In our estimation, it’s much easier to find the five solo canisters yourself, but Cosmic Chests aren’t bad if you happen to come across one in a casual game.

More like this
Gaming
16 hours ago
Fortnite Dragon Ball crossover release date, cosmetics, and leaks
By Joseph Yaden
Gaming
8.9.2022 9:18 PM
Did you know Netflix has games? Here's how to find them
By Robin Bea
Gaming
8.3.2022 8:22 PM
4 best ways to level up quickly in Xenoblade Chronicles 3
By Hayes Madsen
Related Tags
Share: