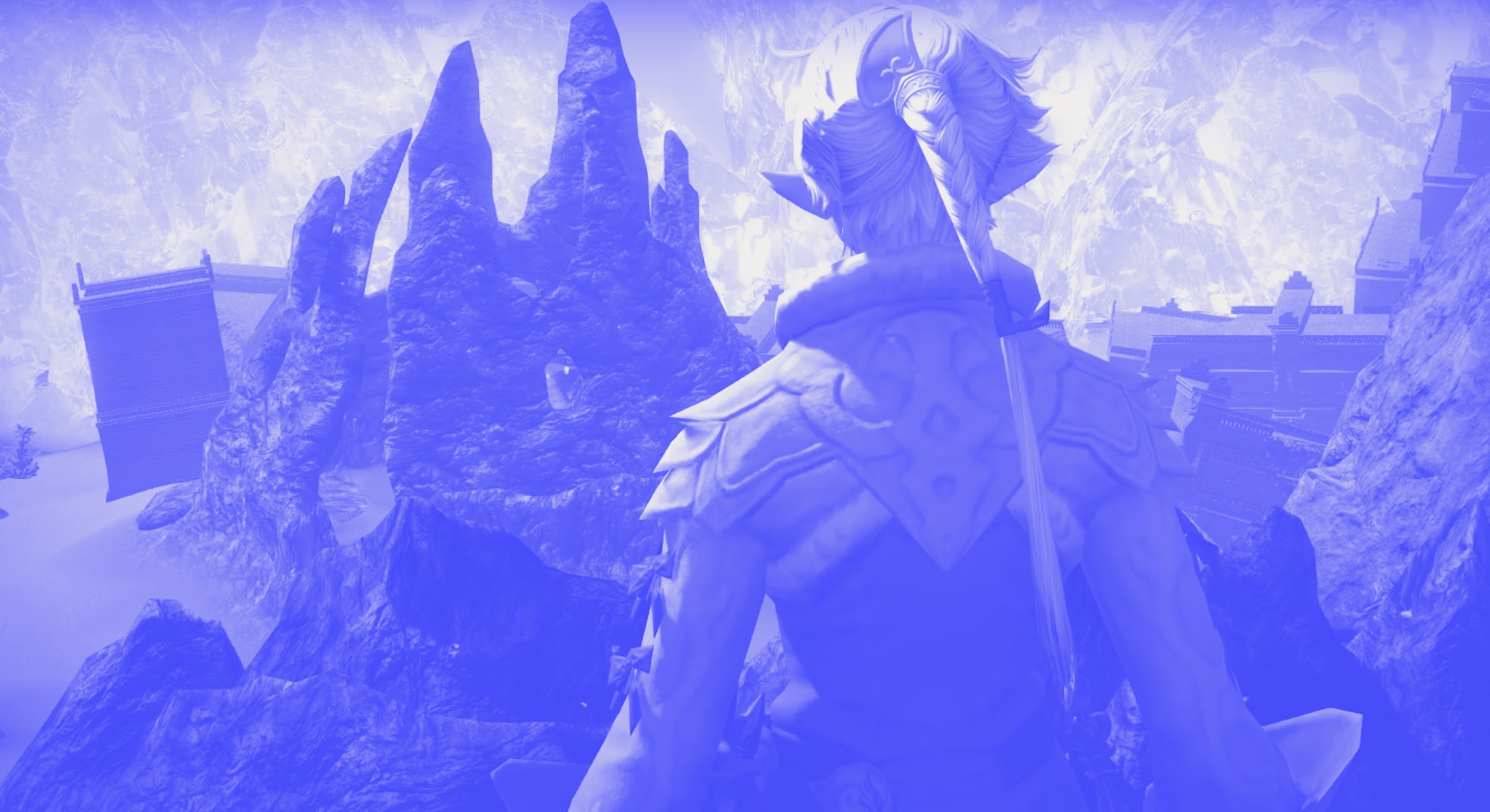 When people pick up Final Fantasy XIV, most of them don't expect to fall in love with it.

Getting into a massive online RPG spanning hundreds of hours and several story expansions (with more on the way) is a daunting prospect. I can certainly attest I had no plans to go mad over the dumb game, even though I'm a lifelong Final Fantasy fan whose favorite game of all time is Final Fantasy VI. I guess spending time in the company of the Scions of the Seventh Dawn makes sappy fools of us all.

It'd take days for me to list the reasons why Final Fantasy XIV keeps me enthralled. There are innumerable references to past games, all woven seamlessly into the culture of Eorzea and its surrounding countries. There's the stunning soundtrack, headed by Masayoshi Soken — who, as was recently revealed at Final Fantasy XIV Fanfest 2021, composed one of the game's best themes while hospitalized with cancer. Also, the game is hornier than a Chocobo after a goat weed binge, and I mean that in the best way possible.

But my reasons for being a fan go deeper than "Haha, Square Enix actually allows its extremely anime characters to complain about their bouts of gonorrhea!" I'm currently taking the scenic route through some family trauma that's left me feeling helpless on the sidelines while everything inexorably slinks downward. In these instances, the simple act of playing a game you love can be a comfort. But you might also discover a character who, for one reason or another, touches an especially raw spot on your heart and binds themselves to you.

For me, that character is the fiery-tempered but gentle-souled Red Mage Alisaie Leveilleur. Her steadfast commitment to characters who are rendered silent and still as a result of great mental trauma is a bitter reminder that my brain-damaged mother is losing her faculties day by day. On the flip side, Alisaie's charity and commitment to her cause is a reminder that wherever there's life, hope lingers.

Cheesy? You bet. The decade-spanning ongoing story of Final Fantasy XIV isn't short on the oft-trite messages that shape my beloved Japanese RPGs. But it’s also a masterclass in delivering cliché, genre-defining story content in a way that makes me weep like a recently orphaned kobold.

You meet Alisaie and her somewhat oblivious twin brother, Alphinaud, early in your journey. She's a teenage Elezen girl with long, pointed ears. In other words, she's an elf. And, like an elf, she initially comes off as a snobbish loner who doesn't play well with others, including her brother.

Not long after you meet Alisaie, she excuses herself from your company for an extended period. In fact, if you neglect to do the Binding Coil of Bahamut raid at the end of Final Fantasy XIV's initial A Realm Reborn content, you won't see her again until she stumbles back into your party hours later, a little humbler after a brush with death.

Final Fantasy XIV's Eorzea is a magical land with magical maladies—some of which mirror afflictions we deal with here on earth, as I learned the uncomfortable way. One sickness of considerable concern is known in-game as "tempering," which occurs when a living being has its mind stolen by a "Primal," a twisted facsimile of the series’ iconic summon monsters. The Primals demand their followers' hearts, minds, and souls, since their fervent prayers help keep them anchored to the corporeal world. These "tempered" followers know nothing other than devotion to their deity, but they can still talk, walk, and contribute to the growth of their disturbed little cults.

In Final Fantasy XIV's Heavensward expansion, the kobold tribe's routine summoning of the Primal Titan goes spectacularly wrong. When a little koboldling named Ga Bu discovers that his tribe's Patriarch killed his parents to further the summoning (even referring to the dead pair as "coke for the furnace"), Ga Bu's devastation mingles with the summoning ceremony. A particularly violent iteration of Titan springs to life in the fray, and the effort appears to blow out Ga Bu's mind.

Ga Bu is identified as an anomaly; not fully tempered, but not in charge of his faculties, either. He can't speak. He can't reason. He can only move with the assistance of carers who guide him from place to place. When Alisaie realizes what's become of the little kobold's mind, she quietly takes responsibility for him, gently speaking to him and encouraging him even as his only response is a blank, unchanging stare. Alisaie talks to Ga Bu as they lounge under the stars, promises she'll bring her brother to visit someday, and makes sure to check in on him whenever she has a spare moment during the long, involved process of saving the world.

These interludes with Alisaie demonstrate that despite her young age and stand-offish introduction to the story, she carries a great deal of turmoil. Some of it is inflicted by the endless war, and some of it is fed by her own uncertainty and insecurities. She can't stand to lose anyone, least of all her twin brother—but one by one, everyone she cares about fades away.

Alisaie is prideful, even for a teen. It may be that her own vulnerabilities amplify her desire to help people who seem beyond saving. I am immeasurably appreciative of Alisaie's tenderness—and I am thankful she doesn't hide it or scorn herself for being "soft."

My mother's brain started its gradual slide into oblivion on an unusually foggy February day in 2019. (I chronicled her initial accident in the context of Red Dead Redemption 2, because I am a half-developed adult who can't stop associating real-life trauma with the media she consumes.)

If you're not in a reading mood, here's the teal deer: My mother slipped down an icy staircase and drummed her head several times on the way down. While there was initially hope she'd make a full recovery, multiple major seizures have stolen her away piece by piece since then. After the first seizure, her short-term memory went from "a little borked" to forgetting I was in the house five minutes after entering. After the second seizure — which very nearly killed her — she could no longer walk without the aid of a walker. The third and worst seizure hit last winter, an event that was apocalyptic enough for the hospital to tell us to brace ourselves.

My mom survived, but barely a shadow remains. She's almost immobile without a wheelchair. Having a conversation with her is like trying to converse with something from outer space. Her short-term memory is nonexistent, and her long-term memory isn't doing so hot, either. She stares blankly at the TV all day, usually not even aware of when she's accidentally tuned into the French channel.

Here's a cool fact: Nobody is immune to grief. You might think "Hey, I'm cool, I've got it together," but grief is a nasty, ratty bugger. If it's not twining around your ankles and tripping you up day by day, you can bet it's saving its energy so it can leap and sink its needle teeth into your ass at the most random moments. One day, I saw The Hobbit on my mom's bookshelf and realized we'd never talk about Tolkien ever again. That was my first "Don't Forget, You're Here Forever"-type realization.

The Inn at the End of the World

The second time Grief Rat deigned to bite my butt happened when I visited the Amh Araeng map in Final Fantasy XIV's Shadowbringers expansion. I love traveling across most of Shadowbringers' maps, but Amh Araeng is an exception. It's an ominous place that's literally located at the end of the world; the tsunami of pure light frozen on its horizon looks like it's seconds away from engulfing the entire planet known in-game as The First. This desert map is where you'll find one of the grimmest locales featured in an RPG—and, by extension, where you'll find Alisaie.

For various reasons involving hocus-pocus, a flood of Light threatens to suffocate The First through most of Shadowbringers. Beings born of this poison Light, called Sin Eaters, prey on innocent people to consume the aether that courses through their bodies. That sucks by itself, but it's preferable to having a Sin Eater infuse you with its essence and leave you to suffer a slow, agonizing degradation until your body gives out and you "hatch" into a new Sin Eater.

When possible, the Light-infected individuals travel to the Inn at Journey's Head, located in Amh Araeng. Despite its cozy name, the Inn is a combined hospice and euthanasia clinic. The infected gradually become stiller and more silent as the Light gradually steals over them. When the final change seems imminent, the patient is fed their favorite food mixed with a dose of poison.

I find my visits to Amh Araeng always leave me a little heartsick, even when my business doesn't take me near the Inn at Journey's Head. For reasons I hope I've made obvious, I don't much like the sight of those NPC's sitting, unmoving, while they mumble nonsense. I have an especially hard time with one NPC who's slumped on the floor, mourning his inevitable end with broken sentences, while one of the Inn's staff tries to comfort him.

Alisaie is one of the Inn's staff. She falls into the job after arriving on The First several months before the Warrior of Light, and she never abandons her post regardless of how difficult it becomes — or, in her own words, how many last meals she's forced to bear witness to. Despite being plucked from her own dimension and dumped into a world on the brink of the utter end, she throws everything she has into making sure the Inn's "guests" are as comfortable as possible and will receive a dignified death at the end of their stay.

Eorzea is a land of magical maladies — and, by extension, magical cures. Recent story events in Final Fantasy XIV have revealed that certain spells and actions make it possible to cure tempered beings like Ga Bu and reverse the Light poisoning that afflicts the people of The First. Unsurprisingly, Alisaie's unblinking efforts and unwavering confidence are what make these cures possible to begin with.

These are happy story moments, but I'd be lying if I didn't admit I feel a little resentful of them. Final Fantasy XIV's afflicted will heal to some degree; my mother never will. She'll forever be a blank-eyed patient at the Inn, until I get another call about a seizure. For all the lovely lessons Final Fantasy XIV has about love and life, the name of the product is right there in the tin: Fantasy.

That's my own pettiness, mind. The suffering of the tempered and the Light-poisoned isn't the point here, nor are the cures. The point is everything my family does to help my mother, and it's the people who help keep us aloft while we keep going. It's the medical staff and therapists who keep her clean, take her for walks, and engage with her as much as possible.

The point is, and always will be, Alisaie Leveilleur. And that's why I think humans will be all right, despite Earth being a never-ending clown show.