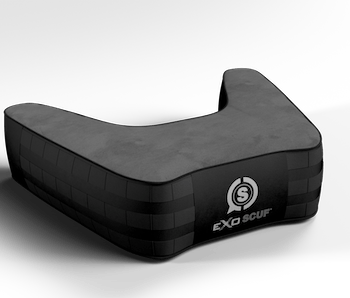 Yes, the EXO SCUF is kind of a pillow, but it's far more than just a mere fluffy thing you'd rest a piece of your body on. For any gamer, it's a better investment than a luxury bed pillow. Most people spend about a quarter of their life sleeping, but how much of our lives do we spend gaming? Is it enough to justify a price of $39.99 to make marathon gaming sessions infinitely more comfortable, probably for the rest of your life?

The answer is yes, especially because you already have pillows to rest your head at night, but not a well-designed cushion for your lap for when you're gaming.

Sophisticated Gamer is an Inverse series focused on elevated gaming accessories you won't be embarrassed to show to your Tinder date. We only recommend products we love and that we think you will, too.

In the era of semi-permanent work from home, the EXO SCUF from SCUF Gaming feels like a must-have — particularly for anyone who spends a lot of time at their computer and/or many hours each week clutching a controller.

People are more sedentary than ever before in 2020 as so many offices remain remote and the video game industry continues booming. Studies show that sitting for several hours each day is linked to heart disease, diabetes, all-cause mortality, and even the blue light from every screen in your life is shown to have a negative impact on sleep. Ergonomics may have felt like a luxury in a pre-coronavirus world, but now, paying attention to how our bodies interact with our everyday environments has become a necessity.

Enter SCUF Gaming, the company best-known for manufacturing high-end video game console controllers — like the excellent SCUF Vantage — and for pioneering the innovative rear bumper buttons you also see on Elite Xbox controllers. Their EXO SCUF is the kind of strange invention that you'd never look for outright, but once you experience what it can do, it becomes an essential accessory for everyday life.

What is the EXO SCUF?

Ostensibly a flat, controller-shaped boyfriend pillow for your lap, the EXO SCUF promises to "improve [your] posture and enhance comfort while gaming or using portable devices" by countering the "gamer lean." Even when at a computer, gamers have a tendency to lean towards the action on the screen, which often results in poor posture over long periods of time. My own chiropractor once asked me, "How the heck are you sitting all day?" I'm far too often curled towards the TV, hunched over my controller.

The EXO SCUF is designed to curb that specific tendency we all fall prey to.

“By encouraging an improved gaming posture, the EXO SCUF helps to reduce tension and stress in the neck, shoulders, and back, while supporting the wrists and elbows to enable unrestricted blood flow to the hands and arms so you can focus on your game," CEO and Founder of SCUF Gaming Duncan Ironmonger said in an official press release. While that may sound a bit farfetched, the clever design behind this promise is deceptively simple but effective.

Labeled a "support cushion" in official materials, the EXO SCUF does offer a lot of support and cushioning for your elbows to reduce overall tension in your upper body, but depending on how you use it, it'll also support your wrists.

I've grown partial to putting it on my lap while at my computer, resting my elbows on the EXO SCUF while my wrists are on a long foam bar. The top and bottom of the cushion have the same smooth layer of suede. I've seen my cat lay on it on numerous occasions, including several instances when I was trying to work.

The real utility of the EXO SCUF, however, does come while you're gaming.

The EXO SCUF is the perfect length to rest your entire forearms on, and it's wide enough to accommodate holding a Nintendo Switch or any handheld device. Even if you're playing with the Switch docked through a Pro controller, this cushion is a better, more comfortable way to play. If you've ever felt fatigued playing with the entire Switch for a lengthy period of time, the EXO SCUF is definitely a real game-changer in terms of comfort. The same goes for iPads or other tablets.

And because the cushion itself is about 6 inches thick, resting your forearms on it pushes your shoulders upwards ever so slightly — just enough to pitch your back into a comfortably straight position.

Even the packaging feels smart

Despite the fact that it's big enough to cover your entire lap, the EXO SCUF comes in a box that's about the same size as one that a SCUF Gaming controller might come in. This actually excited me, because I initially assumed this might be a Casper mattress situation where the box is small and once you open it, the comfort expands outward like magic. In actuality, the EXO SCUF is sort of a lap-shaped pool float, which is to say that you have to blow it up manually.

Even with my pitiful lung capacity, it took only 46.82 seconds for me to blow it up taking steady deep breaths and not rushing the process at all. And if you've ever tried blowing up a pool float, you've probably fumbled the essential final step of shoving your finger through your mouth to block the inflation valve as you stick the plug into the cavity. (You don't want to lose any inflation!)

The EXO SCUF cavity, however, has one of those foolproof locks that'll trap in the air unless you press the button-like stopper inward. So you can achieve a customized level of firmness that would otherwise be impossible.

If you've spent much time in or around pools in your life, then this might seem like a marvel. If not, then I probably sound like a weirdo.

Either way, this facet is a deliberate little innovation that makes the EXO SCUF something more than just a cushion. Because it's inflatable, that also means it's much lighter than a throw pillow of a similar size, and therefore it won't overheat your lap over extended periods of time. It also means that the EXO SCUF can be easily deflated for transport, and it even comes with a little satchel bag to carry it around in

All of this exemplifies the thoughtfulness that SCUF Gaming is so well-known for: Not only is it a comprehensive package that's a step ahead of most similar products, but there are so many of these attentive design choices that you don't realize are essential until you actually notice them.

At $39.99, the EXO SCUF might seem like a luxury that few can afford for themselves when the Xbox Series X and PlayStation 5 are on the horizon, but for anybody with a passionate gamer in their life, this just might be the perfect price point for a gift this holiday season.

The EXO SCUF is available now.