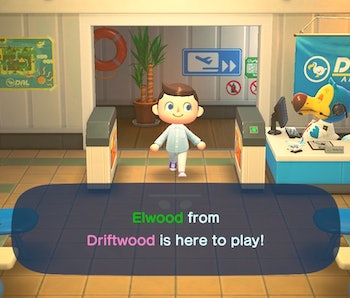 Thursday was just another regular day on Jessica Kovalick's Animal Crossing: New Horizon island. That is, until actor Elijah Wood sent her a direct message on Twitter, asking to visit her island to sell some turnips.

It all started when Kovalick tweeted that Timmy and Tommy Nook were buying turnips for 599 Bells on her island. Like any community-minded player would, she invited folks to visit her island if they wanted to sell off their stash of root veggies. Her turnip price was so tempting that her tweet garnered hundreds of likes in a few hours, but most importantly a DM from Wood, who goes by Elwood from the island Driftwood.

“I freaked out,” she told Inverse in a Twitter message. “I’m in a Tom Nook stan [group chat] and we were all FLIPPING out. He [even tipped]. He gave me some Nook Miles Tickets and a pear. An absolute king.”

Kovalick — who named Wilfred and Lord of the Rings as some of her favorite movies Wood starred in — “obviously” let him skip ahead of the other turnip traders that had messaged her about getting access. All in all, Wood was on Kovalick’s island for about 15 to 20 minutes, but he wasn’t only there for business.

After selling off his turnips, Wood posed for pictures with Kovalick and her friends, picked some fruit for the road, and even admired and complimented her landscaping.

“He told me my island was beautiful and that he still had a bit of work to do,” she recalled. “I promised to send him some gifts in dodo mail to help him decorate.”

Before Wood returned to his island to spend all of the Bells he had just earned, he shouted out Rian Johnson, the director of Star Wars: The Last Jedi and Knives Out, in honor of Kovalick’s Twitter handle @directedbyrian.

Every day turnip traders from around the world visit other players’ islands and open up their islands to make a quick buck off the turnips they buy from Daisy Mae every week. Thousands of gamers use platforms like Reddit and Turnip.Exchange to hunt down a good price or advertise their island.

Twitter might not be the most effective way to get people to get other players to quickly visit your island if you’re looking to make some earnings in tips. But you might get a DM from Elijah Wood, the Lord of the Turnips.