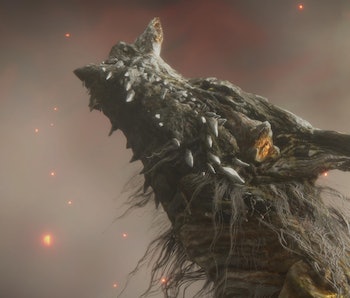 Towards the end of Elden Ring, as you sweep up the last bit of optional bosses, you might come across a deadly foe known as Dragonlord Placidusax. Aside from being difficult to pronounce, Dragonlord Placidusax is even harder to defeat, due to its absolutely devastating AoE attacks.

To make matters worse, this boss is hidden in a hard-to-reach area, making the entire experience challenging overall. Thankfully, we’ve got all the details you’ll need to eliminate this boss, from effective battle strategies to its exact location.

To reach Dragonlord Placidusax, start at the Beside the Great Bridge Site of Grace in the center of Crumbling Farum Azula. Head back and take the lift all the way down. Then head west down the steps and through a building until you reach an outside area.

On the southwestern side of this area is a cliff with several platforms beneath. Drop down and follow these platforms to the south until you reach a large piece of land where you’ll get a prompt to lie down. Do this and you’ll be transported to the boss arena.

You can use a variety of builds to take down the Dragonlord, but make sure you’ve got plenty of Vigor, a stat which primarily determines the size of your HP bar. Even 40 Vigor can feel too low, so try and level up as much as possible beforehand. We were around level 160 when we fought this boss.

While melee builds are totally viable for this fight, you’ll likely have an easier time if you use magic instead. Spells like Comet Azure or The Queen’s Black Flame are highly effective since they deal lots of damage and allow you to stay back.

Still, if you’re running a melee build, you’ll find success with Bleed weapons, as they deal damage over time. Dex weapons are also useful here since they can be swung quickly, allowing you to preserve precious stamina.

Finally, we always advise bringing the Mimic Tear Spirit Ash along with you, preferably at max level (or as close as possible). This way, you’ll have some assistance throughout the fight.

The strategy you need to use will differ slightly depending on your build. Whichever build you’re utilizing, you should run towards the boss to grab its attention, and immediately take note of the red lightning markers all over the ground. If you stand in one spot, the lightning will trigger, allowing you to easily move out of the way to avoid it.

If you’re using a melee weapon, make your way behind the boss and swing away at its tail carefully. Make sure not to keep swinging to the point of running out of stamina because you could get caught in the midst of the aforementioned lightning attacks. We also advise two-handing your weapon and to avoid locking on since the camera can get wonky. While attacking the dragon from behind, the other main move to watch out for is the boss’ fire breath, which can wrap around and deal significant damage to you. If you see the dragon start to breathe fire, immediately run away.

Spellcasters will be able to stay back to deal ranged damage safely. It’s best to use a similar method described above, but you can place distance between you and the dragon while casting spells effectively. Rock Sling and Greatblade Phalanx work wonders here.

After you get the boss down to around two-thirds health, it will disappear and fly up into the air. The dragon will reappear and swoop down with a massive swipe attack that will take off half your health bar—if not more. Thankfully, you can roll through the attack if you time it right.

At this point, we recommend locking onto the boss immediately after it swoops down, even if you’re using a melee weapon. This is because the boss will teleport multiple times, making it hard to track. Each time it teleports, it will dish out a devastating swipe attack before disappearing again, so be ready to roll. Once it settles down, you can unlock and begin attacking from behind like before.

The third and final phase starts out a lot like the last. Dragonlord Placidusax will disappear and then swoop down to swipe you with its claws. Only this time the boss will attack multiple times, so be sure to roll more than once.

After this, the dragon will then begin using its powerful laser attack, which will take you out in one hit, even at max health. Because of this, it’s imperative that you immediately start running toward the boss as soon as it settles down so you can avoid the blast. If you’re close enough, the laser will go right over your head.

During this phase, the boss will teleport and reappear often, so be prepared to roll through its claw swipe frequently. Keep attacking, but make sure you don’t get too greedy, as you’ll need to dodge away from its attacks often.

More like this
Gaming
Jan. 13, 2023
5 essential tips for a breezy One Piece Odyssey playthrough
By Jess Reyes
Gaming
Jan. 23, 2023
Here’s how to beat the infuriating Fanatic Tower boss in Persona 3
By Willa Rowe
Gaming
Jan. 18, 2023
How to find Wenut Tunnels in Genshin Impact and defeat Setekh Wenut
By Jess Reyes
LEARN SOMETHING NEW EVERY DAY.
Related Tags
Share: