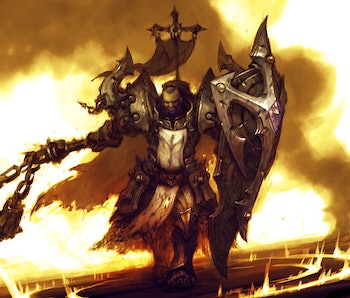 Diablo 3 is still active, even with the impending launches of both Diablo 2: Resurrected and Diablo 4. Every few months, a new season delivers hefty updates that still notably change the nearly nine-year-old game. With the next update, the follower system is getting a long-awaited rework.

Thanks to the game's PTR (public test realm) servers that let players help the developers test the updates before launch, we know what to expect too! This is everything we know about Season 23 and PTR 2.7.0 for Diablo 3.

But first: How did gaming get you through the pandemic? We want to hear from you! Take this quick Inverse survey

What is the Diablo 3 Season 23 PTR release date?

Diablo 3's 2.7.0 patch, which will introduce Season 23 to the game, will enter PTR on February 25, 2021. On this day, the update will be available to PC players who own Diablo 3 on Battle.net and have opted into the "PTR: Diablo III" version of the game.

There is no way to help test this patch out on PS4, Xbox One, or Nintendo Switch, so you'll just have to wait for the Season 23 patch. There is currently no release date for the Season 23 wide release, but this testing period indicates a release sometime this Spring.

What are the Diablo 3 Season 23 patch notes:

A blog post on the game's official website details all the major changes coming with Diablo Season 23. The biggest one is a revamped Follower system, which makes these non-playable characters that will fight with the players more useful. This shows that beneficial fixes can still be made to a game almost a decade after launch.

We'll delve into that specific feature more later, but the patch notes also highlight more filters being added to the solo leaderboards and the following item changes coming with Season 23:

The developers also tease Season Rewards in the blog post, though they aren't included in PTR 2.7.0. A yet-to-be-revealed portrait frame and a pet will be given to players who manage to complete Season 23's Guardian journey. Still, the main aspect of this update is the follower system changes.

What are the Diablo 3 Season 23 Follower changes?

As mentioned, followers in Diablo 3 are NPCs that the players could lightly customize to best fit their needs. The Templar focuses on Strength, the Scoundrel Dexterity, and the Enchantress Intelligence. While they are fairly helpful, limited item slots and TK prevented them from ever reaching their full potential. Season 23 will change that by revamping the whole system.

According to the aforementioned blog post, Followers in PTR 2.7.0 and Season 23 will have 14 item slots that will allow for deeper customization for the Followers and in turn, made them more useful:

Some specific items like the Broken Crown (all of them are detailed in the blog post) will also have "Emanate" capabilities that give the player any legendary powers and set bonuses associated with the Enmanate gear equipped on a given follower. The skills for each follower have also gotten revamp.

The Scoundrel has access to new skills like Night's Veil and Piercing Shot, while many of his other skills have seen slight tweaks and reworks The Templar has seen tweaks to many of its skills too, with Onslaught and Guardian receiving the most significant reworks.

Finally, the Enchantress has the new skills Temporal Pulse, Amplification, Prophetic Harmony, and Fate's Lapse in addition to tweaks. That said, her Forceful Push, Mass Control, Disorient, and Missle Ward skills are all getting removed. You can see the full list of changes on the official PTR 2.7.0 patch notes blog.

This major rework revamps a Diablo 3 system that lots of players have come across, but might not use very often due to its limited utility. A developer note on the blog post says the goal with this revamp is to make followers "more meaningful and provide greater utility to the single-player experience." While PTR players will be the final judges, the patch notes indicate that they've achieved just that.

Diablo 3 is available now for PC, PS4, Xbox One, and Nintendo Switch.