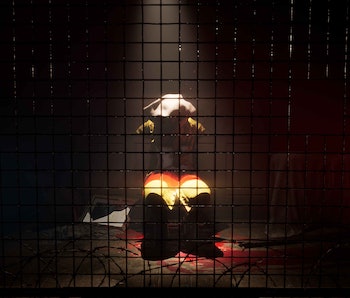 It’s cliche to say that the setting of a story is like a character in their own right. This is often said of fictional places that evoke something visceral to the point they have as much impact on the narrative as the people moving the plot forward. In horror games, the setting often sets the tone of the story. The Devil in Me, the latest entry in Supermassive Game’s Dark Pictures Anthology, accomplishes this in spades. The “Murder Castle” it features it the best horror game puzzle box settinmg since Resident Evil 2’s police station.

The Dark Pictures Anthology has been an experiment with successes and failures. The first title, Man of Medan, was serviceable, Little Hope was critically panned for its narrative, and House of Ashes delivered the best combination of story and gameplay the series has seen so far. All of the anthology’s titles are attempts by Supermassive to capture the same playable horror movie experience as their cult hit PS4 exclusive Until Dawn. The Devil in Me will be the fourth and final entry in what Supermassive is calling the first season of the anthology and looks to deliver a polished version of each title that came before it.

Each anthology entry takes heavy influence from a specific genre or film in the horror pantheon. For The Devil in Me, the main inspiration is Saw. My hands-on preview of the game quickly introduced the cast, a documentary crew filming a series on serial killers invited by a mysterious benefactor to tour an exact replica of H.H. Holmes’ infamous Murder Castle.

Holmes was the first American serial killer, operating out of Chicago during the late 19th century. During the World’s Columbian Exposition in 1893, Holmes built a hotel that hid numerous trap doors and rooms designed specifically for his murderous obsessions. It would become known as the Murder Castle.

Before long the film crew becomes well aware of the fact that they are trapped within the castle, and that their host may have more sinister intentions than first believed.

As in past Dark Anthology games, The Devil in Me rotates through the main cast giving you control over each of them in different scenarios. Charlie, the crew’s much-derided leader, searches for a pack of cigarettes in one early section, at which point it becomes clear just open the Murder Castle is compared to past Supermassive settings.

A large lobby area acts as an easy reference point for exploration, but beyond that, you can lead Charlie through any number of hallways or doors in search of a smoke. While this isn’t entirely unlimited freedom, this is a step above any previous Dark Pictures Anthology game. Exploring the Murder Castle feels exciting until it starts feeling terrifying.

H.H. Holmes famously designed the Murder Castle to be as confusing as possible, building stairways to nowhere and doors that opened to brick walls. It was meant to be a confusing playground that instilled fear in Holmes’ victims. Supermassive has taken this idea to heart, leveraging the freer exploration of The Devil in Me to let the player lead themselves into danger and feel scared when suddenly hallways you could swear had just been there are gone and rooms you’ve never seen open themselves up and reveal a pitched black void that could be hiding anything.

In many ways, the Murder Castle in The Devil in Me harkens back to Resident Evil 2’s expertly designed police station. Rooms have puzzles or environmental obstacles that require you to move bookshelves around in order to maneuver yourself into formerly unreachable areas. While this sense of exploration does lend itself to the sense of terror that finding yourself in one of your mysterious host's murder traps without a way out instills, the mechanical feeling of exploration itself is lacking.

Supermassive games have always shined in their cinematic choose-your-own-adventure approach to horror narratives. Previous attempts to ramp up third-person exploration have not been well received. Walking around in games like The Quarry is some of the most frustrating moments, as it feels like characters are fighting your directions. This goes for The Devil in Me as well, while I wanted to explore as much of the Murder Castle as I could in search of cigarettes for Charlie, he would often turn or run into walls without reason.

The Murder Castle is such an interesting setting that feels filled with danger and mystery that it makes up for the lackluster exploration controls. After finishing my preview, I was itching to lead the film crew to their fates in what is shaping up to be the best Dark Pictures game to date.

The Dark Pictures Anthology: The Devil in Me will be released on November 18, 2022, for PlayStation 4, PlayStation 5, Xbox One, Xbox Series consoles, and PC.