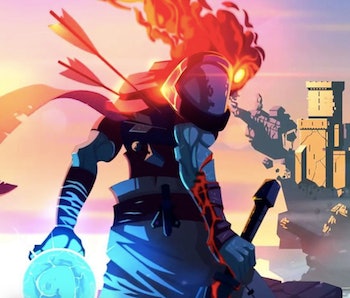 Matthew Houghton, marketing manager at Evil Empire, says this was a way to broaden the game’s audience beyond those looking for a hardcore challenge.

“We always knew there was a significant chunk of players who enjoy Dead Cells, but just don’t have the time, skill or energy to conquer the game,” Houghton tells Inverse.

“We wanted to let those players easily reach the later stages of the game to see what they’re missing, or to just have a great time rampaging through the island without worrying too much about dying early.”

Inverse spoke with Houghton to better understand the studio’s motivation for implementing the new Practice Makes Perfect update, and why the team thinks accessibility is so important.

Adding accessibility options is a nuanced process that differs from game to game. It’s almost never as simple as scaling enemy health or making the player’s attacks more powerful.

“To date, we’ve added certain options such as disabling bright flashes and screen shake, as well as an option to hold the attack button to perform combos rather than button mashing,” Houghton says.

Dead Cells has always been known as a difficult roguelike action platformer, requiring immense skill from the player to progress through its stages. But now, thanks to the Practice Makes Perfect update, players have a slew of options to make it easier.

A new training room allows you to practice fighting enemies, and the new “Aspects” feature grants you an array of five formidable powers to choose from, like Firestarter, which boosts flame damage by a whopping 100 percent. Or, the Assassin Aspect allows your first attack while invisible to instantly eliminate an enemy. These abilities make you way more powerful than you’d be otherwise, without making you feel invincible. A refined world map and a streamlined way to know how much damage you’re dealing also help make the game more appealing.

Dead Cells has undergone dozens of iterations since its launch in 2018. With it being a roguelike, it’s an experience you can sink a lot of time into, and the fact that no two runs are the same keeps you coming back. With Practice Makes Perfect, the team looks to add even more longevity to the game.

“The real draw of roguelikes is the element of really having to learn the game,” Houghton says. “You have to adapt to what the game gives you, making decisions and changing your strategy on the fly. Different builds can give wildly different results so you are always learning something new, and if you want to change your playstyle on the next run it’s really easy to do so.”

The reason so many players are drawn to roguelikes -- and to Dead Cells specifically -- is the same reason others might be intimidated by it. Not everyone has the patience, time, or skill to learn the ins and outs of such a complex game.

“Options like this allow those players to continue to have fun with a game that they like without messing around with mods, and at the end of the day gaming should be fun,” Houghton says. “Players who want to make their life easier can choose them, while the purists can continue in their hardcore ways with no worries.”

Beyond appealing to more players, adding accessibility features is simply good for business. The more accessible a game is, the more people can enjoy it, and the more copies it will sell. To this day, Dead Cells has sold over 6 million copies, and the new expansion will likely add to that.

“One of the best things about the fans of Dead Cells is how far they’ve allowed us to take a traditional game and continue to iterate on it, effectively using a games as a service model, except we’ve only charged for updates twice,” Houghton explains.

And now, thanks to the Practice Makes Perfect update, even more players can “go off on a run with much more confidence.”