“This mixtape will save the world.” 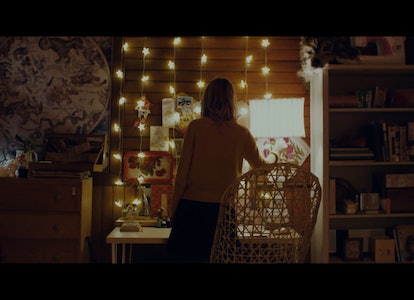 That’s the perspective of filmmaker A.T. White, who presents a dreamlike version of the end of the world in his 2018 debut feature, streaming free online right now.

In Starfish, the troubled emotional state of White’s main character, Aubrey (Virginia Gardner), is just as important as the disasters surrounding her, perhaps even more so. The whole apocalypse might just be metaphorical, anyway.

For Aubrey, it feels like the world is ending even before the world has actually ended, as she’s grieving the death of her best friend Grace (Christina Masterson). White opens the movie with strange voices on a radio and brief glimpses of some kind of energy field, before cutting to the much more mundane scenes of Aubrey at a funeral. It’s not immediately clear who has died and what Grace’s relationship is to the deceased, and that wispy vagueness informs most of the movie, even during later rushes of exposition.

It’s better to view Starfish as a mood piece rather than a sci-fi puzzle, and in that sense, it’s evocative and moving. It’s a beautiful, haunting movie with images that will remain with viewers even after the plot details have faded. Much of the credit goes to Gardner, who is the only actor onscreen for the majority of the movie. She brings a raw vulnerability to Aubrey that complements White’s artful visuals and meticulous soundtrack choices (he’s also the composer).

After Grace’s funeral, Aubrey breaks into her friend’s house, which is decorated in a tastefully hip retro style, complete with select vintage technology (a rotary phone, a portable cassette player, a walkie-talkie). Aubrey just wants to feel close to her departed friend, even taking care not to disturb the indentation in the pillow in Grace’s bed. She feeds some starfish to the jellyfish that Grace keeps in a fish tank, and she befriends Grace’s pet turtle Bellini.

The next morning, she sees dark smoke in the distance, and discovers that the apartment has no heat or electricity or phone service. Like many movie protagonists in the subgenre one could dub “I woke up to the apocalypse,” Aubrey sets out to explore her surroundings, only to discover deserted streets in the small, snow-covered mountain town, with damaged and abandoned cars. There are ominous trails of blood, including some smeared on the window of the restaurant below Grace’s apartment. When Aubrey sees some sort of hideous creature in an alley, she runs right back inside.

Those creatures are scary, but Starfish isn’t really a horror movie. It’s more internal than that, as Aubrey comes to terms with her grief over Grace’s death and her regret over a personal betrayal, the details of which White reveals gradually in impressionistic flashbacks.

When Aubrey returns to the safety of the apartment, she’s contacted on the walkie-talkie by someone who lives nearby and says that he knew Grace.

This person explains that this apocalyptic situation has been created by mysterious signals embedded in various kinds of broadcasts, which converged to open some sort of portal. Grace was a member of a group researching the signals, and Aubrey finds notebooks full of dates, charts, and calculations. The man on the walkie-talkie transmits a signal that drives away the creature pounding at Aubrey’s front door.

He tries to enlist Aubrey to help him, to piece together the counter-signal that will close the portal and end the disaster. But Aubrey doesn’t want to save the world. She just wants to wallow in bitterness and self-pity. “I wonder if the world still exists if I choose to ignore it,” she says to no one in particular. She turns off the radio and shuts herself off from what’s left of the outside world, with Bellini the turtle as her only companion.

But saving the world also means reconnecting with Grace, who’s left a sort of personalized scavenger hunt for Aubrey so that she can reconstruct the signal. It starts, of course, with a cassette tape, labeled “This mixtape will save the world.” Grace has recorded instructions for Aubrey, along with a killer playlist of apocalypse tunes. Aubrey finally ventures forth, making stops at all the places she and Grace used to hang out, from the supermarket to the library to the movie theater to the local radio station, collecting tapes at each stop.

It’s a simple quest narrative, but White keeps it obtuse, letting Aubrey drift in and out of the languid visions she experiences when she listens to each cassette. One transports her into an anime-style interlude in order to escape an attacking creature. Another takes her behind the scenes of the movie Starfish, observing the crew as they mull about before the next scene. White uses his experience as a musician to construct what amount to miniature music videos within the larger narrative, and Starfish is best experienced by giving yourself over to the atmospheric vibe.

That’s what Aubrey does, too, and her efforts to potentially save humanity, guided almost entirely by unseen voices, are secondary to her efforts to save herself. “Forgive and forget,” Grace labels the tapes (and carves into one of the tables at her restaurant). Aubrey eventually embraces that kind of letting go, and so does the movie.

Starfish is streaming for free on Tubi and Kanopy in the U.S.