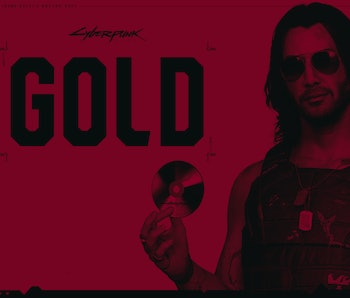 At one point in time, game developers had to actually finish making a video game before it was installed on millions of Blu-ray/DVD discs or game cartridges. You'd say that a game had "gone gold" when it hit this stage of production. Copies of the game would then be shipped to retailers, and that was the end of it.

With the advent of more live service and online games with ongoing updates, this once-important threshold has gradually evaporated. When Cyberpunk 2077 developer CD Projekt Red announced Tuesday that the game had been delayed a third time to a new release date in December, despite the game having "gone gold" on October 5, it rendered the term totally inert.

This isn't necessarily a bad thing, but it is a stark reminder that antiquated development benchmarks have become meaningless in the modern era of gaming. That's especially the case when the vast majority of games receive ongoing support and updates long after their release date.

To their credit, CD Projekt Red has already directly addressed the disconnect between the game's gold status and this latest delay. To the best of our knowledge, a game has never been delayed after already going gold, so this brings to question why the term exists at all.

"Passing certification, or 'going gold', means the game is ready, can be completed, and has all content in it," the latest delay announcement reads. "But it doesn't mean we stop working on it and raising the quality bar. On the contrary, this is the time where many improvements are being made which will then be distributed via a Day 0 patch."

Day 0 or Day 1 patches have become more common in recent years, particularly on consoles. If a developer cannot meet pre-established deadlines, then it'll lead to delays at some point in the process. That "going gold" benchmark is seemingly often a deadline imposed by the publisher. So developers often resort to shipping an unfinished game to still meet the release date. Then, they'll resolve residual issues with a launch day update that everyone is forced to download before playing.

Previous updates from CD Projekt Red also suggest they have high expectations for Cyberpunk 2077 internally. While the wait for the finished product will probably be worth it, having to download a large update even when you have a physical copy of the game has been frustrating for gamers, particularly those with slow or spotty internet connections.

Consider Call of Duty: Modern Warfare, which launched October 2019 with an initial download size of well over 100 GB, depending on the platform. Then the Day 1 update was over 40 GB (which is around the size of most standard games) just to play the game. By August 2020, the file size had grown to over 200 GB if you download all of the game modes. But Call of Duty is a monolithic franchise with atypical file sizes that's more focused on online multiplayer than anything else.

The Last of Us Part II is another example: Official materials say it requires 100 GB of free space but then takes up closer to 78 GB. The Day 1 patch of about 4 GB included bug fixes and a photo mode. Even the version 1.05 "Grounded" update from August 2020 included a number of "frequently requested improvements."

Both Call of Duty: Modern Warfare and The Last of Us Part II went gold weeks before their launch dates, yet they both required hefty updates to actually play. This has become the standard we all expect.

Even single-player offline games are never really complete, so what's the point of a "gold" designation? The truth is that it doesn't mean much anymore. That's not bad per se. It just means that things have changed. And Cyberpunk 2077's latest — and hopefully final — delay feels like a wake-up call that it's time to move on.

Ultimately, delaying a video game to ship a more complete gaming experience later will always be objectively better than playing a janky, unpolished version of it earlier. Delays are a good thing. But when most people hear that a game has "gone gold," they assume that it's complete — yet that is almost never the case anymore.

So what's the point?

More like this
Gaming
12 hours ago
How the Hi-Fi Rush Ending Sets Up a Potential Sequel
By Hayes Madsen
Gaming
9 hours ago
Nintendo Direct rumors reveal the blurred lines between guesses and leaks
By Willa Rowe
Gaming
8 hours ago
The Best Gifts for All 35 Characters in Fire Emblem Engage
By Samuel Tolbert
LEARN SOMETHING NEW EVERY DAY.
Related Tags
Share: