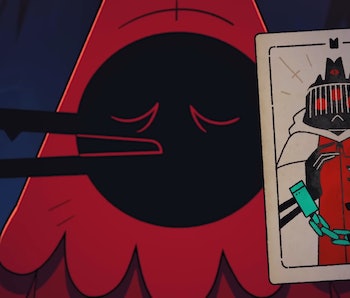 In Cult of the Lamb, you customize your kit as much as you customize your cult. Your weapons, curses, and tarot cards can determine whether you dominate or die on your next run through the roguelike dungeons. Newbies might be overwhelmed by all the powerups up front, especially if they’re not used to the rougelikes. So we shuffled through the cards and found a few worth an article. Here are the 8 best tarot cards to stack your deck for future runs.

You can’t go wrong with The Hearts. These cards add hearts to your health depending on the number from Hearts I to Hearts III. The Hearts III will obviously be a better pick than Hearts I, but it’s only available after meeting certain conditions. Take whatever you can as you progress.

Here’s the breakdown of each card and a brief description of how you can get them:

Other cards like The Hearts include The Lovers I and II, which add blue hearts, and the Diseased Heart. The Lovers’ blue hearts aren’t as good as red ones because they can’t regenerate. Once you take damage, they’re gone. The Diseased Heart damages the entire room of enemies if you get hit, but you should still try to avoid damage in the first place.

If you aren’t lucky enough to draw a Hearts card, either of them would make reasonable replacements.

What else damages as you roll? Well, Ichor Lingered leaves black ichor on the ground as you roll, which damages enemies like poison as they tread over it. Similarly, The Bomb drops explosives as you roll, but then you need to wait for them to detonate. Both Ichor Lingered and The Bomb are available for purchase in Smuggerl’s Sanctuary later in the game.

Arachnid is an easy early-game option considering how it adds damage to your attacks early in the game. It poisons enemies with your attacks, no matter if you use weapons or curses. Poison slowly whittles away the health of your enemy, even after striking. So it might not make a dramatic difference, but it will make it easier to kill off enemies.

One of Divine Strength’s greatest “strengths” is how it applies to both weapon and curse-based builds. It multiplies your attack rate by 1.25, so you can attack faster and therefore do more damage. It’s also one of the default tarot cards you can draw from the start of the game.

Master of the Art & Ambrosia

Master of the Art is a starting card that increases weapon damage by 1.2. It makes sense, considering how often melee weapons show up at the start of the game. However, if you find you prefer curses later, you can hope for Ambrosia instead. You need to buy it from Forneus, though.

Hearts can only help you so much once you’re dead. Thankfully, The Deal gives you a second chance at life. It’s especially during boss fights where you need just a little more health to finish the fight. You can buy it after unlocking Midas’s Cave on your world map.

Cult of the Lamb is available for PC, PlayStation 4, PlayStation 5, Xbox One, Xbox Series X|S, and Nintendo Switch.