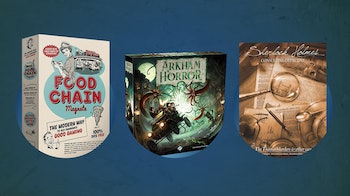 In addition to being a timeless form of entertainment, playing board games may help keep you sharp and protect your cognitive functioning later in life, according to research. For gaming enthusiasts who enjoy complex board games, this comes as great news. But there’s a big difference between games that are enjoyably challenging and ones that are so complicated it’s frustrating — and there’s a few things to consider when you’re shopping around to ensure you wind up with the former.

First, think about the type of games you tend to enjoy the most, if you already have an idea. For example, you may enjoy abstract games that rely entirely on strategy, or resource management games where you gather and manage materials as you work toward a specific goal, or dungeon-crawlers where you explore an unfamiliar space while battling predators. And then there’s the matter of cooperative versus competitive board games; Some people thrive on competition while others prefer working together as a team to build worlds or fight common enemies.

Additionally, it helps if you have an idea of how much time you’re ready to spend playing a board game. For some, challenging games that can be completed in as little as 30 minutes will do the trick. But others might be in it for the long haul and prepared to post up for several hours at a time. The picks below range in length of gameplay, so you can find just the right option for you preferences.

Below, I rounded up a list of some of the best and most complex board games out there right now. To land on the final selections, I read through tons of reviews, looking for games that manage to offer that perfect blend of complexity and fun. Check them out below.

The lowdown: Complicated yet engrossingly fun, the Scythe board game will appeal to gamers of all experience levels. The engine-building game, which boasts more than 3,700 five-star ratings on Amazon, is set in an alt-historical 1920s Europe. Players must grow their land and build robot-like machines while also protecting themselves from invading factions. The competitive game blends combat with resource management — and whoever amasses the biggest fortune by the end of the game wins.

One reviewer wrote: “Scythe is a massively wonderful game of strategy that I would absolutely suggest to any board game enthusiast looking to play one of the greatest games of all time. [...] It's complex, but not so much that I would say anyone wanting to learn the game, wouldn't be able to, regardless of their prior knowledge of board games. If you're willing to invest a little time to learn this game, you won't be disappointed!!”

2. A cooperative dungeon crawler with monsters and tactical combat

The lowdown: Another complicated board game that manages to be complex in a satisfying way, Gloomhaven is a cooperative dungeon-crawler that combines role-playing with tactical combat. Players wage wars together against automated monsters, clearing out dungeons as they acquire loot and pick up new skills.

Rather than having a fixed end-goal, this game is typically played over a series of sessions, allowing players to continue to build on the story. It’s a cult favorite on Amazon (with 5,000-plus reviews and a 4.8-star overall rating), although some users warned that it weighs more than 20 pounds and takes up a lot of space on the table — so make sure you have enough room to set it up.

One reviewer wrote: “Gloomhaven, while complex and often difficult to set up for the initial game without some kind of organizer, is an incredibly fun game. Immersive, with cooperative, tactical, and roleplaying elements all baked in. [...] I've been a gamer for decades, and I think that this might be the single best board/RPG crossover I've ever encountered. Highly recommended.”

3. This classic role-playing fantasy game set in a magical multiverse

The lowdown: No roundup of the most complex board games would be complete without mention of Magic: The Gathering — a longtime classic among RPG fans — and this starter kit serves as the perfect entry for newcomers. Although it’s technically a card game, the way you roll the dice and spread everything out on the table gives it a board game feel. The competitive strategy game is set in a sci-fi fantasy multiverse full of wizards and magical creatures. Everyone starts the game with 20 life points, and the goal is to defeat your opponents by reducing theirs to zero. This set comes with two 60-card decks, along with a rulebook and various accessories.

One reviewer wrote: “This product provides a quick, balanced, fun game for up to five people. It is perfect for introducing new players to the game because the interactions among the cards are relatively straightforward. Experienced players can also enjoy Game Night because the preconstructed decks emphasize in-game decisions rather than card choice. It is great for two players, and it is even better with more.”

Number of players: 2 to 4 | Game play: Not specified

4. A resource builder where you grow a fast food chain empire

The lowdown: If you loved Monopoly as a kid, you’ll definitely geek out over Food Chain Magnate. While the complex board game is heavier on the strategy than its real estate-themed predecessor, it relies on all of the same principles of building a business empire, making it one of the best resource management board games out there. The goal is to build a successful fast food chain while amassing wealth. Players must compete to acquire staff, make purchases, and market their franchise.

One reviewer wrote: “Amazing game, zero luck and a lot of planning. The game give bonuses to players who made smart choices, and punishes those who didn't, which is amazing.”

5. This abstract board game from ancient China that’s compellingly challenging

The lowdown: Anyone who loves abstract board games like Checkers or Stratego is bound to love Go, a challenging two-person board game that originated in ancient China. The game, which is also called Weiqi, falls into the category of “easy to learn, incredibly difficult to master.” The goal is to move stones around your opponent, capturing, conquering, and expanding. It’s played on a large board that produces an almost infinite number of possible moves. This particular set is good for travel thanks to its foldable board and magnetic pieces.

One reviewer wrote: “I love this game! I played years ago and wanted to start again, but am having problems finding other players in my small town. I have a 10-year-old relative who already is proficient at chess and can't wait to teach him Go. It is a nice board for portable use, I especially appreciate the magnetic pieces.”

6. A complex mystery board game series that’s based on Sherlock Holmes

The lowdown: This well-thought-out mystery board game is complicated in a good way, according to reviewers. Based on the British detective franchise, the “Consulting Detective” series is a collection of board games that offer different mysteries to solve. Players work together in the cooperative games to find clues and use their sleuthing skills to solve the cases. There are 10 games in the series, including the Thames Murders (featured above), along with the Baker Street Irregulars, Jack The Ripper, the Carlton House, and others.

One reviewer wrote: “I cannot be more impressed. For a game that feels so complex and immersive, it's so easy to explain and grasp how to play. The mysteries and the world are written very solidly. I cannot recommend this game enough. It is worth every penny.”

7. A classic game of Chess to challenge your strategic thinking skills

The lowdown: Chess is a great example of a complex board game that keeps you on your toes without being frustrating or overly complicated. You must think strategically and train your mind to plan ahead, but the general rules are fairly easy to learn and understand. The goal is to capture your opponent’s king in a round of simulated warfare. This particular set folds together in a handy wooden travel case and features a felt interior and smooth birchwood pieces.

One reviewer wrote: “I bought this as a birthday present for my boyfriend (who loves chess) and he loves it. The quality is great and I love how the pieces can fit inside of the board. 10/10!!”

8. This gloomy dungeon-crawler that’s based on the Dark Souls video game

The lowdown: Another satisfyingly complex dungeon-crawler, Dark Souls is a cooperative strategy board game that’s based on the action role-playing video game of the same name. The board game version drops you into the same dark and foggy fantasy world as the original, filled with monsters and other sinister creatures. Players work together as knights or warriors to fight the dark souls and find treasure. The core game set comes with 27 miniatures and 252 cards — and numerous expansion packs are available.

One reviewer wrote: “This game lives up to the hype. Very well made. Packaging was well thought out, and the game plays like you think it should. Pretty brutal and challenging at times, but great fun.”

9. A World War II-themed board that teaches tactical leadership and simulates combat

The lowdown: History buffs will love the thoroughness and complexity of Advanced Squad Leader, a tactical war board game set in World War II. As the name suggests, players act as squad leaders, gathering their troops and moving them through battle. The games involves competitive strategy and tactical planning as you fight your enemies and expand your territory. This starter kit features a shorter, abbreviated version of the original rulebook with helpful illustrations — once you’ve mastered the basics you can tackle the full book.

One reviewer wrote: “If you like complex war games this is the perfect game to introduce you to the abstract, random, and often confusing rules in the war game simulation genre.

10. This complex mystery board game inspired by H. P. Lovecraft

The lowdown: Inspired by the infamous sci-fi fantasy writer H. P. Lovecraft, Arkham Horror is another cooperative board game where players gather clues to solve baffling mysteries. However, these mysteries involve non-human entities such as evil aliens and cosmic creatures. Players team up to investigate the harrowing storylines and attempt to figure out what’s going on as horror is unleashed all around them.

One reviewer wrote: “Such a complex game but once you get to understand everything it's really awesome. Worth it!”