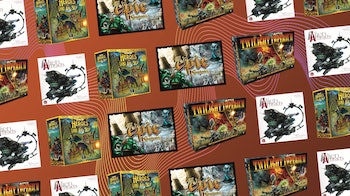 Playing board games isn’t just a lot of fun — there’s evidence that the “cognitively stimulating” activity can bolster cognition and reduce your chances of developing dementia. If that’s true, then we should all be playing 4X games. The best 4X board games offer exceptional cognitive stimulation, requiring players to employ high-level strategy to build empires and defeat foes. Channeling a concept that can be traced back to the popular 90s computer game Master of Orion, all 4X games feature the following elements:

Today, 4X games rank among the most popular subgenres of strategy-based board games — and with good reason. They’re incredibly diverse, offering a wide range of styles and formats. Some, for example, are most fun with a group while others can be played with two people or even solo. Game time also ranges widely, spanning anywhere from quick 30-minute sprints to sprawling 8-hour marathons. In short, whatever your flavor, there’s a 4X game for you.

Below are the best 4X board games that take place in a variety of landscapes including fantasy kingdoms, sci-fi space galaxies, and ancient civilizations.

1. A galactic battle game where you deceive opponents and dominate aliens

The lowdown: Space nerds will love this galactic-themed 4X board game that combines sci-fi and strategy. It’s the latest installment from the Twilight Imperium saga, and the goal is to explore space while conquering other civilizations and rising to dominate the galaxy. Reviewers on Amazon noted that it’s a long game but worth it.

One reviewer wrote: “The best board game I’ve ever played, a true 4x game!”

2. This civilization game that involves battling enemies as you build your empire

Number of players: 2 to 4 players

The lowdown: In the this popular 4X board game, you explore land, exploit resources, and construct a city from the ground up. It has well-made components and beautiful artwork, according to customers. Not only that, you can build an entire civilization in about an hour per player.

One reviewer wrote: “[Absolutely] LOVE this game! I think coupled with the expansion this games flowers into what it should be. Diverse, energetic, full of intrigue.”

3. A fast-moving fantasy board game that can be played in an hour

The lowdown: If you’re searching for a quick-and-easy 4X fantasy board game, look no further than Heroes of Land, Air, & Sea. The popular fantasy-based exploitation game involves strategically selecting your faction and expanding your dominance among orcs, elves, dwarves, and humans. It has its fair share of all four Xs, particularly the extermination of your enemies.

One reviewer wrote: “Components…can I just say WOW! The miniatures are amazing…absolutely gorgeous! The board is beautiful with vibrant colors, clear & concise images, and very well laid out.”

4. This action-packed 4X game where you fight wars for dragon runes

The lowdown: The objective of this action-packed 4X board game is to explore the fantasy world of Terrinoth, expanding your empire and exterminating foes along the way. You’ll use an army made up of Waiqar undead and Daqan humans to fight for dragon runes. The components are all well-built and the storyline is intriguing, according to reviewers.

One reviewer wrote: “It's just amazing. [...] After you play it, there is an ongoing feeling of ‘I should've totally done that’ or ‘I can't believe I didn't see that possibility’. For days after we played, my friends were still talking about strategies and the game feel. Runewars is amazing and it calls for a replay as soon as possible.”

The lowdown: Alien Artifacts is a fantastic option for all of the space lovers out there. Equipped with an intergalactic research ship, the objective of the fast-paced 4X board game is to explore outer space while combatting aliens. It’s technically a card game but has a board game feel — and you can play it in under an hour.

One reviewer wrote: “While technically a 4X game (explore, expand, exploit, exterminate), it is light on the extermination part, which, for me, is a plus. At its essence, this is a brainy strategy game, in which you must decide how best to develop an empire and achieve specific goals which are unique to each player.”

6. A short 4X game with orcs and elves that you can play in just 30 minutes

The lowdown: Tiny Epic Kingdoms is one of the best short 4X games out there. Play time is often just 30 to 45 minutes, but during that time you have ample opportunity to explore, expand, exploit, and exterminate. The game comes in a tiny box and can be played with just two players.

One reviewer wrote: “Wow. Epic. A very beautifully conceived, wonderful to look at, simple yet tactful light tiny game that all fits inside a box smaller than my hand.”

7. A space-themed strategy game that you can play alone or with ‘rivals’

The lowdown: Another intergalactic adventure, this exciting strategy war game ranks among the best space 4X board games. The objective is to expand your empire throughout the galaxy as you colonize outer space, exploiting resources and slaying your adversaries. Reviewers called Space Empires a “gem.”

One reviewer wrote: “If you love 4x games, crave complexity, and are okay with the lack of bling; this game is probably for you. I definitely got my money's worth out of this game.”