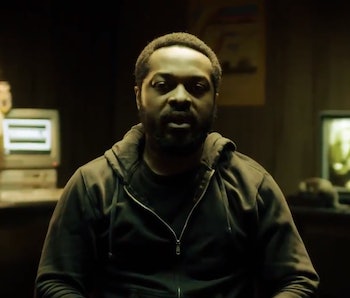 In a video shared on developer Treyarch Studios' Twitter account, a man identified himself as William Bowman. He is the son of Joseph Bowman, a character from the first game in the Black Ops series, released in 2010.

"That game felt so real, like I was really breaking into a government server somewhere and discovering something I that wasn't supposed to," William Bowman says, first disguised beneath a hood and speaking through a garbled voice filter. "I guess that's who I was always meant to be. The troublemaker that doesn't know when to stop. Just like my dad."

After he pulls down the hood, he identifies himself: "My name is William Bowman. Joseph Bowman was my father. We still got a lot of work to do. I'll see you really soon."

On the website, Treyarch further teases: "10/28 1pm PT — Unlock the next part of the story," meaning there is more to this Pawn Takes Pawn reveal yet to be shown.

Who are the Bowmans? — Joseph Bowman, played by musician and actor Ice Cube in 2010's Black Ops, was a soldier and the right-hand man of recurring character Frank Woods. Joseph was caputred by Viet Cong and killed by a Russian Spetsnaz soldier in the "Payback" mission.

William Bowman's role in Black Ops Cold War, confirms something fans have only suspected previously: It is a direct sequel, not a reboot, of the first game in the series. William appears to have the talents of a master hacker, which raises questions for the story of Black Ops Cold War. While it's widely assumed the game will take place in the closing years of the Cold War, this latest tease from Pawn Takes Pawn suggests it might take place later in the '90s, or even later.

According to the Call of Duty Wiki, Joseph was born 1940 and died in 1967 at age 27. While it's unknown when Joseph had William, we can logically deduce that William was no more than a year old when Joseph dies. Cold War is meant to take place in the '80s, which means William would be no older than 20 during the events of the game. His reveal in the Pawn Takes Pawn video, suggests he's older than that, maybe 25 or 26. His weariness and general demeanor suggests someone in the range of 30, though perhaps learning how to hack into government networks and doing it on the regular might age someone a few years.

Depending how old William is supposed to be in these videos, the story of Cold War might actually take place further into the future than we've realized, but also include a story set in the '80s. A close approximation to this would be the early Assassin's Creed games, which take place in the modern day and visit period settings via memories.

The Inverse Analysis — There are more reveals to be made about Cold War before the game's release on November 13. The reveal of William Bowman is a big one, but so many questions about his role and his motivations — presumably revenge for his father's death — remain unanswered. There's also that matter of when the game will actually take place.

For now, it's simply exciting to know that the story of Black Ops isn't over. Not by a long shot.

Call of Duty: Black Ops Cold War will be released on November 13.