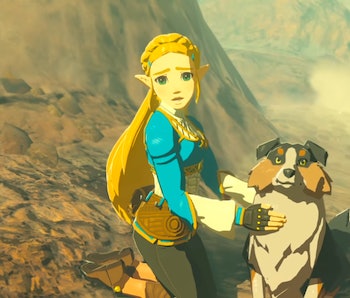 With no news since its reveal at E3 2019, fans looking forward to The Legend of Zelda: Breath of the Wild's forthcoming sequel have been left to contemplate many burning questions. What's the story behind the reanimated corpse that looks like Ganon? Will Link explore a vastly transformed version of Hyrule, or a new locale altogether? And maybe the most vital bit of missing information: Will players finally be able to pet the dogs?

This might seem trivial to an average player, but for many diehards, the existence of pettable dogs in the officially-unnamed Breath of the Wild 2 is as significant as a playable Zelda. Beginning with the release of the original game in 2017, fans have wanted to ruffle the heads and scratch the ears of the many adorable canines seen across Hyrule's outposts. The demand for this feature is so high that it is regularly referenced in popular Reddit posts that garner tens of thousands of upvotes.

It is possible to feed said dogs in Breath of the Wild proper, and that's lovely on its own, but it doesn't quite measure up to the tactile, reassuring experience seen in pet-friendly games like Metal Gear Solid V or Red Dead Redemption 2. Even so, fans have taken what they can get, going so far as to create a speedrunning category for feeding every dog in the game. One can only imagine the bliss of watching players race through a "Pet Every Dog" category on Twitch once Breath of the Wild 2 finally launches.

BotW2 is still so firmly under wraps that we don't even have a release window. Since the 68 seconds of footage we have so far doesn't feature as much as a tuft of dog fur, we are left to speculate based on existing information. What do we know about Nintendo's history with pettable dogs? Well, to be frank, they're a bit stingy in that department, especially compared to other publishers and developers.

Ubisoft, for instance, has included robust and enjoyable dog-petting prompts in its biggest franchises, including the likes of The Division, Watch Dogs, Assassin's Creed, and Far Cry. Nintendo, on the other hand, in its 40 years making video games, has never released a Mario, Zelda, Metroid, Donkey Kong, Kirby, Animal Crossing, Fire Emblem or Splatoon game where you can pet the dog. Pokemon and Nintendogs are the only series where the publisher shines in this regard, and one of those franchises hasn't been for almost a decade.

There are signs that the company is improving its petting policies, however. In 2019, Nintendo published both Luigi's Mansion 3 and Astral Chain, both of which include great interactions with ghost and robot-demon dogs, respectively. Then again, both games were not developed internally -- Luigi's Mansion 3 was made by frequent collaborator Next Level Games, and Platinum Games handled duties on Astral Chain. It's tough to tell whether this was a welcome fluke, or if Breath of the Wild 2 will establish a firm upward trend in this regard.

When it comes to petting dogs in BotW2, fans have clung to one particularly enticing shred of evidence: An interview with director Hidemaro Fujibayashi. Talking to IGN in late 2017, Fubiayashi seemed enthusiastic about the possibilities of Zelda's future:

“I think while we were working on both the main game and the DLC, it was a process of constantly getting lots of different, new ideas as we refined the game, and finding new things we wanted to do,” he added. “Even in situations like this, talking to people and finding out that people want to pet dogs gives me a lot of motivation, a lot of ideas for things we could put into the game.”

The good news is that Nintendo knows we want to pet the dogs. But if they conceded to every player demand, they would have released Animal Crossing: New Horizons early or at the very least put Waluigi in Super Smash Bros. Ultimate.