'Breath of the Wild 2' needs this innovative 'Skyward Sword' feature

"It gave a glimpse into many features that would be adopted in The Legend of Zelda: Breath of the Wild." 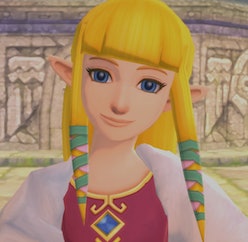 The Legend of Zelda: Skyward Sword HD is coming to Nintendo Switch before Breath of the Wild 2.

While many fans may be disappointed that this means a longer wait for Breath of the Wild's sequel, Skyward Sword still has its merits. The most memorable thing about Skyward Sword is how it fully incorporates motion controls into combat, and the February 18 Nintendo Direct reveal confirmed that will remain in the re-release.

The Nintendo Switch port will even feature a control scheme that converts these motion controls to an innovative dual-stick setup. With Breath of the Wild 2 still on the horizon, it's possible that the game could learn a thing or two from this Skyward Sword re-release. Wouldn't it be interesting if Breath of the Wild 2 was able to incorporate the same controls interface as an option for players? It would be a surefire way to make the sequel more than just the same thing.

In Skyward Sword HD, combat works differently than in every other The Legend of Zelda game. You'll use the right Joy-Con to swing Link's sword, and the right one to use his shield. It was a surprisingly accurate system, even on the Wii, and should work even better now with the Joy-Con's improved technology.

This control system makes every encounter feel more involved and intense as you're the one actually performing the attack and block actions. In some ways, that made Skyward Sword feel like Ring Fit Adventure more than eight years before the fitness game was released. On Nintendo Switch, players will also have the option to use more standard controls.

Instead of buttons, the right stick or right Joy-Con's control stick will be used to move the sword like you would while swinging. As Nintendo has found a way to make this intricate sword-swinging system work with both motion and regular controls, they could expand its use by making it a possible control option in Breath of the Wild 2.

Even if combat isn't changed too much, having more control over where you could swing your weapon could open up some interesting opportunities with enemy weak points that can only be hit in a certain way. While traditional controls would likely also need to be included so fans of the first game don't experience whiplash, this alternative control style has a lot of potential.

A connection between Skyward Sword and Breath of the Wild isn't unheard of either. While promoting this HD port during the Nintendo Direct, The Legend of Zelda Series Producer Eiji Aonuma explained an overt connection between the two games.

He said that while the original Skyward Sword "was still following the established convention of The Legend of Zelda," it actually "gave a glimpse into many features that would eventually be adopted in The Legend of Zelda: Breath of the Wild."

The three features Aonuma specifically points out are being able to use a sail to descend in mid-air, using a stamina gauge that depletes as players climb and run, and the system of collecting items to upgrade. All of those features were expanded upon in the first Breath of the Wild and will almost certainly return in the sequel.

As such, there's precedent for Breath of the Wild games to learn from Skyward Sword.

"I'm sure a lot of you saw me and thought there might be news about the sequel to The Legend of Zelda: Breath of the Wild game. Unfortunately, we don't have anything to share right now. We apologize. Development is proceeding smoothly and we should be able to bring you some new information this year. For now, we'll have to ask you to wait just a bit longer."

At some point in 2021, we will finally see Breath of the Wild 2 in action. When that happens, we will finally know if any systems that we have speculated about have made the jump to the sequel including this one. With rumors that ports of Wind Waker and Twilight Princess are still on the way, Zelda's 35th anniversary could be an exciting one for fans!