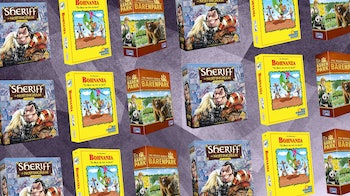 If you want to master a skill, scientists believe that practicing deliberately is the key to success, as opposed to just logging a bunch of hours. However, starting in the right place is another important factor. You wouldn’t jump into karate, for example, and start trying black belt moves right away. The same holds true for gaming. If you want to really get into it, you need to begin with the right one — or what some call a “gateway game.” The best gateway board games introduce non-gamers to the gaming world without being overly complex or intimidating. They often have the following qualities:

Below is a list of the best gateway board games for beginners. Scroll down to find one that suits you best.

1. A fun and artistic storytelling game with a straightforward end goal

The lowdown: Boasting a near-perfect rating on Amazon after thousands of reviews, Dixit is one of the best intro board games due to its simple objective (to rack up points) and clearly defined ending (when the cards run out). To play, you simply draw an illustrated card and create a story-like clue to go with it. Your opponents then guess which illustration corresponds. Dixit has hooked plenty of Amazon reviewers, with several of them noting that it’s especially great for fans of the card game Apples to Apples.

One reviewer wrote: “This is the game that got me into board games. It's fun, simple, and the art is really nice to look at and think about while you play. You can play with basically anyone!”

2. A unique bear-themed game where you build an animal park to win

The lowdown: Another fantastic gateway board game, Bärenpark is a straightforward Eurogame — a category of games that share several common traits, including a competitive nature without requiring players go head-to-head — without a lot of complicated rules. The idea is to build a bear park (which is basically a zoo with bears) and fill all your squares with various attractions. Each attraction is worth points so, similarly to Dixit, you win by having the most points at the end. It has an optional expert mode so once you’ve mastered the basics, you can increase the challenge to keep it interesting.

One reviewer wrote: “This game is a really good gateway game. The theme is very cute and the gameplay is simple enough to let you focus on what you're doing without losing sight of what others are. It kind of comes down to a race mechanic, who gets their boards completed first, who gets the highest bonus tiles, who gets the first bonus objective, etc. but it doesn't feel like a race. There are way to put pressure on other players while remaining light and fun.”

The lowdown: Considered by many to be one of the best board games of all time, Catan is a classic game that should be on every beginner’s startup shelf. It will familiarize you with basic gaming concepts without being overly complex. (One reviewer dubbed it the “Candy Land of strategy games.”) Plus, its popularity is so huge (with more than 17,000 five-star reviews on Amazon alone), that learning to play early will open up lots of opportunities to join friends and other gaming circles.

One reviewer wrote: “I love Catan, I think this game is well balanced, easy to learn and really fun to play. I've gotten friends and family members who've only ever played games such as Card Against Humanity to not only play, but truly enjoy it.”

4. A game of deception where you smuggle goods and avoid the sheriff

The lowdown: Avoiding the eponymous sheriff while accumulating as much gold as possible is the goal of this fun and lively game. It’s among the best best board games for new gamers because it offers a glimpse at basic gaming mechanisms while still having a party game vibe. You can choose to deceive your opponents or play it straight, depending on your preference, and the second edition comes with the previous expansion packs included.

One reviewer wrote: “We loved it! Played with my game friends and had a blast! Easy to learn and fun to play.”

5. This city-building game full of lies and gold acquisition

The lowdown: While technically a card game, the popular Citadels is nevertheless a great gateway into board gaming as well. To succeed, you must learn the art of deception and morph into other characters (which gives you special abilities). The clear goal is to build a money-making city and collect lots of gold. Reviewers noted that that it’s fun to play and it’s not weighed down by excess rules.

One reviewer wrote: “I got this game for a game night I had with friends. None of us had played this game before and we were off and running within 15 minutes. Rules were very clear in the game. I was worried it was going to take us hours of reading rules or spend a hour watching others playing it on youtube but this game was surprising easy to learn and still complex enough to keep hardcore gamers involved.”

6. A popular tile-laying game that’s set in a medieval fortress

The lowdown: With nearly 5,000 fans on Amazon, Carcassonne is one of the most popular board games in the gateway genre. The objective of the intriguing strategy game is to score the most points by laying tiles in a medieval landscape. Like others in its class, it teaches beginner gamers to outwit other players and fool their opponents. Reviewers agree that it’s easy to learn and fun to play.

One reviewer wrote: “Board gamers call games like Carcassonne a ‘gateway game’ because it is so much fun that even non-gamers will enjoy it. For me, that's simply the distinction of a really well-designed game — which is what Carcassonne is. The mechanics are super simple but offer a variety of strategic play. Moreover, it's fast-paced so that no one is bored waiting for their turn.”

7. A quirky game where you become a bean farmer and trade cards with your opponents

The lowdown: Become a bean farmer in this unique Eurogame for beginners where you strategically trade cards to grow your farm. The goal is simple: to possess the most gold at the end of the game. But don’t underestimate this game based on its wholesome farming theme — reviewers noted that it’s quick to hook you. If you’re still unconvinced, this popular game has over 2,000 positive reviews on Amazon.

One reviewer wrote: “I definitely recommend this game. It's a good gateway to the style of games that are popular right now, as it is very easy to teach and have fun with. There's a constant sense of satisfaction as your harvest your beans, especially so when you manage to sell off a big stack.”

More like this
Gaming
5 hours ago
Bayonetta Origins Has a Storytelling Gimmick More Games Should Steal
By Willa Rowe
Gaming
Jan. 31, 2023
Fire Emblem Needs To Steal a Winning Strategy From the Yakuza Games
By Hayes Madsen
Gaming
Jan. 25, 2023
5 years ago, the most heartfelt indie platformer changed video games forever
By Willa Rowe
LEARN SOMETHING NEW EVERY DAY.
Related Tags
Share: