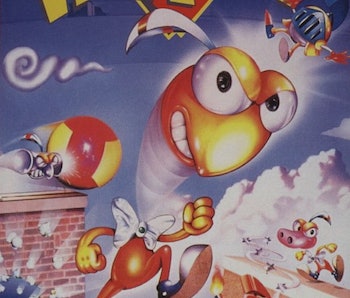 During the height of the 16-bit era, franchises were everything. The video game industry was built around marketable superstar figures like Mario, Link, and the Teenage Mutant Ninja Turtles. When Sega wanted to break Nintendo's stranglehold on global markets, but especially America, it turned to Sonic. Seldom did other stars break out from the occasional one-hit-wonder status, but there’s one bonkers game character who remains tremendously underappreciated.

Games like Super Mario Bros. and Sonic the Hedgehog have several differences, but there’s one big similarity: The player interacts with the world through the main character, and it’s by understanding the player character’s mechanics that the player themself can succeed. Exploration in these games is mostly about mastering the protagonist’s skillset, like properly controlling Tanooki Mario or acquiring Sonic’s Aqua Shield.

Games having main characters isn’t a particularly deep revelation, of course. But understanding that the world revolves around the main character and not the other way around is crucial to mastering the mechanics. A perfect example of this obtuse principle is Treasure’s 1994 Genesis game Dynamite Headdy, which is available right now if you’ve subscribed to Nintendo Switch Online + Expansion Pack.

Treasure’s origins start in Konami, where programmer Masato Maegawa grew frustrated with the company’s focus on Castlevania and Teenage Mutant Ninja Turtles. He recruited a few others to leave and they formed Treasure, whose first game was the licensed platformer for McDonald’s. Their next was Gunstar Heroes, a run-n’-gun shooter that offered almost non-stop explosions.

With a word like “dynamite” in the title, it might be easy to think Dynamite Headdy would follow in Gunstar’s tradition. Instead, it is Treasure’s take on the platformer, one that requires thoughtful and precise timing.

The game takes place in a world of puppets, narrowing the focus on one puppet actor named Headdy who has a detachable head. He looks like a cheap knockoff of Rayman, despite the fact that Headdy was born a year earlier than Rayman. Get this: Not only can Headdy detach his head, but he can throw it around. It is his greatest weapon he uses to defeat enemies but also his most important tool, somehow allowing him to climb stuff. Headdy can jump a little, but if he wants to move around, he needs to hurl his extended head like a grappling hook to snag platforms.

There is a plot of sorts concerning evil puppets interrupting a play called “Opening Demo,” but the main focus is on that marvelous head. Headdy is constantly being transformed through power-ups that can turn his head into a hammer, give him speed, add protective orbs flying around him, turn his mouth into a vacuum, shrink him down, and so on. Not all of these abilities will be particularly helpful at all times, and it’s worth keeping an eye on the green, yellow, and red spotlight in the upper left-hand corner for a health check.

Headdy’s enemies are toy-themed, but it can be hard tracking them as you’re also absorbing the surrounding levels. Headdy’s world is bright technicolor with purple mountains in the background. Cities are topped with onion domes, perhaps to make fun of Moscow’s Kremlin? One cannot be sure.

The artwork channels Pop Art, taking traditional Japanese art like “Under the Wave off Kanagawa” and placing it in the middle of a boss fight with a bear named Trouble Bruin. One level, Baby Face, has Headdy take the form of a plane to battle in the clouds against a giant baby. Sometimes it feels like Monty Python designed this game, or a toddler doing ad-libs. Designer Koichi Kimura named Monty Python’s Terry Gilliam as an influence in an interview with BEEP so the former seems more likely.

Kimura said that while Headdy fights alone, Treasure “wanted the backstory to indicate that his friends were always there to support him.” Even though he’s often wearing a frown, it’s easy to feel this support while playing. Headdy may not have become an icon like Sonic, but this underappreciated platformer offers a delightful challenge to any new players.