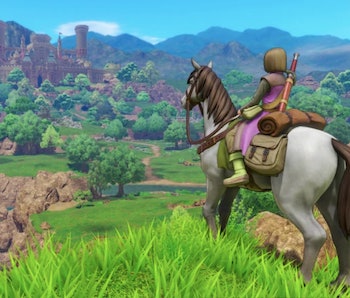 Just a few years back, games industry observers and cognoscenti were predicting the end of single-player games, particularly those centered on allegedly outdated turn-based combat. But thanks to absolutely outstanding games like Persona 5, Octopath Traveler, and Final Fantasy VII Remake, a genre that seemed to be on its last legs in the early days of PS4 and Xbox One has entered a veritable renaissance as we settle into the first year of PS5 and Series X.

There’s a good reason the Dragon Quest series has managed to last 35 years. The fantasy role-playing series embraces bombastic high drama, leaving the fate of the world, your hometown, your love interest, and your steadfast companions hanging in the balance. Will you rise to the occasion as the hero of legend? You damn well better. This isn’t just one of the best Japanese RPGs of the last 10 years, it’s one of the best examples of the genre of all time, right up there with Chrono Trigger, Earthbound, and the pinnacle Final Fantasy games of the 1990s.

Dragon Quest XI is available on PC, Nintendo Switch, and PlayStation consoles. It's also included in the monthly subscription fee for Xbox Game Pass. With more than 100 hours of gameplay for the main storyline alone, that's a whole lotta bang for very few bucks. Physical and digital copies on other platforms can pretty easily be found at a discount, too.

Dragon Quest XI S: Echoes of an Elusive Age may have a real mouthful of a title, but don't let that put you off. This charming tale of sword-swinging heroes, dragons, and maidens fair is completely accessible to newcomers. This wholly self-contained story doesn't require you to have played any of the previous Dragon Quest games — though don't be surprised if you come away hungry to explore other entries in the series after playing this one.

Dragon Quest XI puts players in the role of the Luminary, a young man from a humble village on the precipice of a daunting destiny. What follows is an endearingly familiar — though nevertheless ambitious — love letter to the fantasy genre. If you enjoy SNES or PS1-era Japanese role-playing games, you'll find a lot of comfort food here — swatting slimes with your sword, battle arenas, underwater villages, and rooting through the treasure chests of unsuspecting villagers. There's nothing wrong with familiar tropes if they're well done, and they're brilliantly executed here. The game's cozy opening hours might lull you into thinking that the storytelling isn't especially ambitious, but a jaw-dropping mid-game twist will completely dissuade you from that notion.

If you recently played Yakuza: Like a Dragon, everything that hero Ichiban Kasuga loves about Dragon Quest is abundantly in evidence in DQ11. So listen to the man with the silly hair — this series has been around for more than three decades for good reason.

The S-edition of Dragon Quest XI includes a gaggle of updates and enhancements that were previously only been available to owners of the Nintendo Switch port. These include:

The 16-bit mode is especially cool — it's easy to toggle from 3D to 2D, consistently delightful to see the intricacy of both artistic styles right alongside one another. That said, you can probably find second-hand copies of the standard edition cheaper, and it’s an option well worth considering if you’re watching your budget. The S-version additions are nice to have, but by no means essential.

Dragon Quest XI is not a game to be blitzed through in a frenzied week, but one to dawdle over and savor. Unlike the older RPGs that so clearly inspired it, it's easy to pick up where you left off, with story summaries and quest reminders in easy reach. Even if you don't have that much time to invest, in the coming weeks or ever, it's worth checking out DQ11 for even a few hours. The game's lush, vibrant art style, gorgeous cities, and endearingly cornball dialogue are irresistibly charming.

If you have even the slightest interest JRPGs, this is one of the best ever. Period.

Dragon Quest XI S: Echoes of an Elusive Age is available now on Game Pass for Xbox consoles and PC.

This article was originally published on Dec. 4, 2020