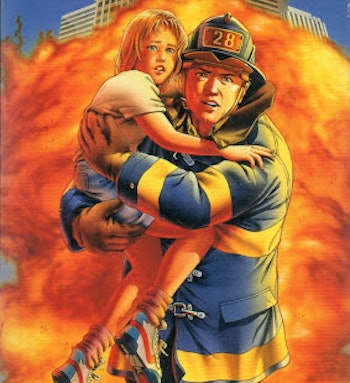 Some retro games take players on incredible journeys with surprising levels of emotional depth. Other retro games challenge today’s players with commitments to rapid-fire timing. And other retro games present challenges that aren’t really present in today’s games. Those can come off a little bizarre in the process.

The Ignition Factor is a game that falls squarely in the third category. If you’re a paid Nintendo Switch online subscriber, you can play this firefighter simulation right now by downloading the Super Nintendo Entertainment System app.

But trust us. It’s weird.

In The Ignition Factor, you are a fireman tasked with rescuing people from a number of burning locations. It’s more of a strategy game than an action one, with inventory management playing a crucial role in figuring out how to get through the hellish blazes within.

There are two types of equipment distinguished by either having circles or triangles next to their graphic. These can roughly be broken down into “extinguishers” and “not extinguishers.” Some locations store chemicals, for example, and others have extensive electrical wiring, and both chemical and electrical fires need their own special extinguisher.

In the “not extinguisher” camp, there are a few classic tools of the trade. Rope lets you get across gaps. Axes can be used to chop down doors. There are also a few more unconventional tools, like CO2 bombs and plastic explosives. These are meant, respectively, to clear large areas of fire and break down impediments.

Needless to say, these are not used in real urban firefighting situations. So why are things so ... bombastic here?

There’s a very quick briefing before you enter each burning building, explaining some specifics of the scenario (watch out for chemicals!). Then you pick out your one circle and one triangle piece of equipment. You can select other tools for other firemen to carry, although they will whine the whole time about having to carry too much. You can also select where to park your fire truck in relation to the building, although this made a real difference to me.

After gear has been equipped, it’s out of the frying pan and into the fire. The levels are truly what make The Ignition Factor worth playing because they are filled with genuinely odd choices. In one of the game’s first stages, the player is stopping a fire at Pygmalion Products, which manufactures mannequins. The player is told repeatedly to be careful because mannequins look like people! So over and over again, the player approaches what appears to be cowering people only to be told they are mannequins.

How do mannequins cower? We will never know.

There are also odd choices made by the people the player is rescuing. In Pygmalion Products, which is broken into two floors, a woman named Ann will refuse to leave until you find her friend Nancy. So then the player has to go down to the other floor to find Nancy, who will leave while reminding you about Ann. And then the player has to go back to Ann, who is literally in the middle of a burning building, and tell her that Nancy has been rescued. Only then will she also leave the — once again — building that is literally on fire.

It doesn’t make a lick of sense. But there’s a certain charm to The Ignition Factor, a sense of absurdity that surely would have been fixed in the early stages of a game made today. That extends to the player’s fellow firefighters, who are absolutely useless save for functioning as refueling stations. It’s one thing to have unhelpful NPCs, but it’s another to have NPC firefighters standing around while they repeatedly catch on fire.

Amidst all this goofiness, The Ignition Factor does work as a game: The player rescues people and finds objects, like antique vases, for bonus points. Sometimes, an unexpected challenge will yield fun results, like tying a rope to a mannequin and sliding across a gaping void, or lowering the water in a fountain so someone can wade through. It’s not perfect, especially when these people continually refuse to leave a burning building until you do X. But being a firefighter is a complicated business.

The Ignition Factor is not a Hall of Fame SNES game. In fact, it feels like something made on the cheap. But sometimes, the odds and ends from 30 years ago can be even more interesting than the hits.