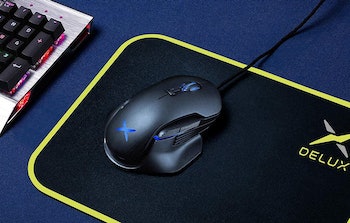 Because they’re virtually symmetrical, the best ambidextrous gaming mice can be used in both your left or your right hand. (They’re also ideal for gamers who use a claw grip on their mice, and they tend to be sleek and simple, so they’re a go-to for Esports players.) While symmetry is a must for this category, you’ll also want to consider the connectivity, the DPI, and the additional features.

First, ask yourself if you want a wired or a wireless mouse. A majority of gamers prefer the former, because while the latter does offer more freedom of movement, it unfortunately often results in a loss of accuracy and speed. (If it’s wired, you also don’t have to worry about changing or recharging batteries.) Still, if you’d rather go cordless, there’s a great option below — and a few of the top-selling ambidextrous mice are available in both wired and wireless models. You also want to make sure that the mouse works seamlessly with your computer. While most gamers use PCs, if you’re on a Mac, you’ll want to ensure that the software is compatible with and configurable on your operating system. Always check the system requirements before purchasing, especially if your OS is older.

Next, there’s the DPI. It stands for dots per inch — dots here meaning single pixels on a screen — and the higher the number, the more sensitive the mouse’s sensor. Keep in mind that a mouse can definitely be too sensitive (especially for a display with fewer pixels), but all of the mice below allow you to toggle between lower and higher settings, so you can customize your sensitivity levels anyway.

Finally, consider the extra features: Do you want multiple programmable buttons? Customizable RBG lighting? How about added weights or wings? These gaming mice offer all of those features and more, whether you’re left-handed, right-handed, or both.

The Razer Viper has almost 20,000 reviews, but has still managed to retain its 4.7-star overall rating — all while falling under the $100 mark. In addition to its ambidextrous design, gamers really appreciate its accuracy and extremely low latency: It has a true 8,000 Hz polling rate as well as a 20,000 DPI optical sensor (adjustable) that flawlessly tracks your movement. The Razer Speedflex cable is designed for quick, nearly weightless movement (but you can also get a wireless version with a 70-hour battery life, too). Last but not least, it comes in four colors, each with on-board memory that stores up to five different profiles.

One reviewer wrote: “Best mouse right now in 2021. Fast response, accurate, very lightweight, came with a bag to carry or storage. [...] Perfect for left-handed (anyway, it is ambidextrous mouse). There are 4 different speeds that you can change or create profiles with them. I highly recommend it for serious gamers and for any game.”

With its split-trigger mechanical buttons, 12,000 DPI, TrueMove3 optical sensor for jitter reduction, and streamlined shape that works for both claw and palm grip styles, the under-$50 SteelSeries Sensei 310 is one of the best values around. It also has two-zone customizable RBG lighting, which you can save directly to the mouse alongside your performance settings, and its durable buttons are guaranteed to last at least 50 million clicks. Currently, it has a 4.6-star rating overall after more than 8,000 reviews.

One reviewer wrote: “Best ambidextrous/left-handed mouse I've ever used, and I've gone through many brands of gaming mice. [...] The materials feel good, the switches seem solid so far, and the software is great once you get used to it.”

For $25, it doesn’t get much better than the Logitech G300s optical gaming mouse. Despite its low price tag, it has nine programmable buttons, easy-to-configure software for customization (including lighting), and a high-quality optical sensor that tracks your movement well. No wonder reviewers have given it a 4.5-star overall rating.

One reviewer wrote: “The mouse is a very well designed mouse ergonomically too, with comfortable places for the fingers. It tracks well too, with no noticeable hiccups or other malfunctions. A great mouse for those with a tight budget and small hands.”

In terms of wireless mice, Logitech’s G Pro crushes the competition with over 7,000 reviews and a 4.7-star overall rating. The brand worked with professional Esports gamers for two years to develop this technology, so even though it’s cordless, it’s super-fast, low-latency, and extremely accurate, it has a 1-millisecond report rate and a DPI up to 25,600. It’s also designed for comfort (thanks to its lightweight, curved outer shell) and durability (with its 50-million-click construction). It also has six programmable buttons and four removable side buttons for customization. According to reviewers, the battery life is an estimated “65+ hours” when fully charged.

One reviewer wrote: “Best wireless mouse on the market. Logitech has pushed the boundaries of wireless gaming mice. It's only 80g, long battery life, and the overall design is fantastic.”

5. The best mouse for Esports

If you’re looking for a mouse for Esports, look no further than the BenQ ZOWIE, which is specifically designed for this category of games. It has a low-profile design for both claw and palm-grip gamers; it offers two thumb buttons on either side for both left- and right-handed people; and it has a streamlined shape for smooth, precise control. You can also adjust the DPI and the responsiveness directly on the mouse, and its plug-and-play usability means you don’t have to download a single driver for any OS. While the DPI only goes up to 3,200, which is less than competitors, most reviewers find that it’s plenty high; you don’t want your cursor flying off of the screen with a single flick of your wrist. (Keep in mind that this mouse is definitely better-suited for large hands; the brand also makes medium and extra-large sizes, but they’re not currently available on Amazon.)

One reviewer wrote: “It's one of the best mice for gaming. It glides well and has great sensitivity. Really worth the money, it's durable and simple. I've always been a zowie fan and I turned my friend on to them as well”

6. A highly customizable mouse for under $50

Finally, if you like to customize virtually every aspect of your mouse and not spend a ton, the DELUX gaming mouse is the way to go. Yes, its symmetrical design means you can switch from one hand to the other (especially since the software has a built-in ambidextrous setting), but you can also program up to eight buttons, choose between five DPIs, pick one of four polling rates, program the RBG lighting with more than 16,000,000 options, customize the weights, and even personalize the side wings.

One reviewer wrote: “Awesome design and support for the hand. The weights and side panels work really well and are easy to pop in and out. The driver for it is very easy to install and use (make sure you have a .rar program). And, perfect for lefties!”