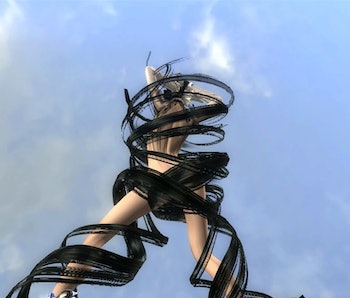 Bayonetta 3 is coming to Nintendo Switch on October 28th, 2022. The return of the Umbral Witch is a welcome addition to a packed October release schedule. The third entry in the series looks to be an over-the-top story that involves multiverses, new playable characters, and a myriad of gameplay additions. The most controversial addition is the “Naive Angel” mode which offers a safe work option for playing the game. I support Platinum Games' decision to offer people options on how to play Bayonetta, but I will be playing as God intended - skin and all.

Do you love her? Do you want to love her?

Because I love her.

She is beautiful, stylish, and strong. Her heels ALSO shoot bullets. That’s so much cooler than a gunblade — eat your heart out Squall Lionheart. Those shoes could step on me. I’d thank her for it!

The Bayonetta franchise is known for being open about the sexualization of the titular witch. Tight fighting clothing, moans, and acrobatic shots abound. But unlike Lollipop Chainsaw, Bayonetta is never the unwilling object of desire. She is always in control. To Bayonetta, her beauty is just as much a tool to defeat enemies as anything else in her arsenal. She exudes mommy energy (what can I say, I have a type).

However, some people (cowards) may be shy about openly proclaiming their love for the Bayonetta franchise, afraid others may judge them for the game’s overtly sexualized themes. Platinum Games is introducing the “Naive Angel” mode to help these people.

“Naive Angel” mode will adjust certain scenes in the game that are deemed a little too risqué. This includes clothing Bayonetta during transformation scenes, and even lessening the sexual factor of the new Demon Masquerade mechanic. This mode itself is a clever tongue-in-cheek way of playing up the sexuality factor of the franchise.

By turning it on, you can play right in the living room without having to worry about what's on screen... we think😅

In practice, the amount of skin shown in a Bayonetta game is not the most sexual aspect of the series. Sexuality is engrained in the DNA of Bayonetta, clothing is just one part of this. The first game opens with Bayonetta’s clothes being torn off as she moans, right before she starts jumping through the air and kicking ass in a skintight suit. Cutscenes play up the sexual innuendo and focus on her long legs and curves, all made more obvious by transformations that see her covered in nothing but a few locks of her long black hair.

The new mode could also be appealing to streamers, as Twitch has strict guidelines over sexual content. While the streaming platform hasn’t banned games like Cyberpunk 2077 from being streamed, it warns that “users may only spend as much time as is required to progress”.

I will not be partaking in “Naive Angel” mode.

Others want to change Bayonetta. I would never ask that of her. Why would you ask the perfect woman to change? But if this is what it takes for more people to enjoy Bayonetta 3 without fear of being judged, then it is a small price to pay. When it comes to Nintendo Switch on October 28th, you can choose for yourself how you want to play. I for one will let Bayonetta shine as she was intended to.