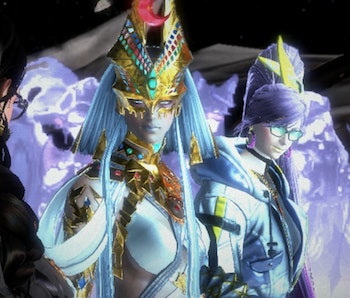 Bayonetta 3 ends with as much chaos as it begins. As an action game first and foremost, the new title from PlatinumGames was bound to have a bombastic finale, and that proved true. The latest 15-hour playthrough of the Umbra Witch’s story brought up many questions about where the series’ future was shifting and ignited a debate about ongoing queer representation — or misrepresentation — in the franchise at large. Some reviewers hinted at a disappointing ending in their Bayonetta 3 reviews, which kicked off the discussion about the queer erasure in this latest installment. Here’s the ending of Bayonetta 3 explained simply from what happened to the resulting arguments outside of the game itself.

Chapter 14 sends Bayonetta hurtling toward the big finale where she learns that the big bad is actually Dr. Sigurd. Viola tasked Jeanne with locating him at the beginning of the story because he was supposedly the only one who could harness the power of the Chaos Gears to restore the multiverse. However, the truth is that he’s actually Singularity itself and the Chaos Gears were just a ploy to trap Bayonetta and Viola in a universe where they can’t stop him from taking over.

Bayonetta fights Singularity’s different forms, including Singularity Balance, which harnesses the powers of the different Bayonettas he’s killed from the other universes. She does enough damage to release them from his control, and they materialize back into reality to fight against Singularity. Jeanne, who Singularity killed in the last chapter, also returns to fight with the Bayonetta army.

Singularity then takes on his final form, Singularity Definition, and nearly kills Bayonetta. Just when he has her encased in rubble, she’s saved by the two other Bayonettas from Bayonetta and Bayonetta 2. The three Bayonettas combine into one ultimate form and go hand-to-hand with Singularity Definition. He then takes Viola hostage in an attempt to turn the tables. Thankfully, Luka swings in Indiana Jones-style to save the day and offers a temporary distraction to save Viola. Now, in full control of his Strider form, he defends both of them.

Bayonetta deals the finishing blow to Singularity with Gomorrah. However, at that point in the fight, she’s so worn out that her Eye of the World breaks. Eyes of the World control Infernal Demons. In Bayonetta’s case, that Eye controlled Gomorrah. Therefore, Gomorrah goes rogue after the medallion breaks.

The resulting collapse from defeating Singularity sucks Viola into a vortex, so Luka dives in to save her. While he’s away, Gomorrah knocks Bayonetta’s soul out of her body and a portal to hell starts to drag her in. After saving Viola, Luka comforts Bayonetta in her final moments and assures her that “their child” is safe. The two kiss before disappearing into the depths of hell together.

The resulting scene confirms that Viola is their daughter ... if you didn’t already know from context clues.

Viola is left alone to mourn the death of her parents. In one final clash, she faces the dark energy leftover from Bayonetta’s death and defeats her in battle. It’s revealed to be her one final test before Bayonetta bestows her with a new name.

In an intact version of Manhattan in the future, Viola attends college and takes supernatural-related side jobs at Rodin’s The Gates of Hell bar. He tells her that he’s going to hear it from “her father” if she’s skipping class, to which she says that there isn’t actually any class that day. He calls her by her “family name,” Bayonetta.

So Bayonetta (Cereza) and Luka seem to be dead, but still able to communicate in some fashion? And Viola has been named the new Bayonetta.

This canonically establishes Bayonetta as more heteronormative than was implied in the past. Bayonetta and Jeanne, the two last remaining Umbral Witches, had a tempestuous rivalry that blossomed into a fierce friendship. Many assumed their relationship was romantic in nature because of suggestive writing and art. Luka, on the other hand, mostly served as a supporting character that annoyed Bayonetta. Therefore, some critics argued that this recent development was out of character and erased her potential to challenge gender norms and conquer her power as a woman over a male-gazey crowd.

Some considered it “biphobic” to oppose this shift in Bayo’s character. Sure, many saw Bayonetta as a “queer series” for years, but accepting her homosexual relationship with Jeanne and outright rejecting her heterosexual union with Luka is, essentially, biphobic. But that’s to say nothing of the flaws in the storytelling, which are abundant.

The other major implication from the ending is that Bayonetta as we know her will no longer be the main character in the franchise moving forward.

Rodin called Viola “Bayonetta,” which seems to be the name Cereza passed down to her after their final standoff. The other two Bayonettas from Bayonetta and Bayonetta 2 could still be kicking even if Cereza is dead, but their status is unclear. At the moment, it seems like Viola is taking the helm and might even be the series’ protagonist for the foreseeable future.

In short, the Bayonetta 3 ending was a mess of crossed wires and unexpected goodbyes to a series mainstay. We’ll have to see whether or not Viola (or whoever else) can keep up with the campy, charming story beats and fast-paced action that the series is known for in Bayonetta 4.

More like this
Gaming
November 28, 2022
Nier:Automata Ver1.1a is far more complicated than a game adaptation
By Willa Rowe
Gaming
13 hours ago
Splatoon 3 Big Run rumors and official news about the “once in a while” mode
By Hayes Madsen
Gaming
November 27, 2022
16 best Electric-type Pokémon in Scarlet and Violet, ranked
By Robin Bea
Related Tags
Share: