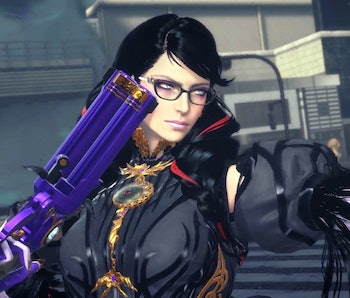 The Bayonetta series has a reputation for thrusting players into ridiculous situations as the titular witch, like battling demons atop a speeding jet. The upcoming sequel, Bayonetta 3 ratchets the absurdity up to 11. Not only can players control massive demons as part of their journey, but they can even use two large boats as water skis to traverse a rive like some kind of gonzo kaiju sim. At PAX West 2022, Inverse went hands-on with Bayonetta 3 to experience how this huge entry focuses on scale in a way that makes previous entries feel small by comparison. I was already sold on Bayonetta 3, but once I stepped into the clawed feet of a horribly large demon, it quickly became one of my most anticipated games of 2022.

An enormous step up

The short 15-minute demo starts off with an encounter that feels familiar: You fight enemies inside a subway train as Bayonetta. It’s an approachable way for the player to get reacclimated to the controls, which feel just as fluid and responsive as ever. Then things immediately open up in a larger exterior area. Bayonetta had to do battle with a set of gargantuan enemies that were simply too large to defeat.

That’s when Bayonetta summoned her two trusty demons, Gomorrah and Madama Butterfly. Each feels equally as menacing despite some key differences. Gomorrah is a massive reptilian infernal demon with dinosaur and dragon vibes who’s slower with more powerful attacks. Madama Butterfly — also referred to as the Mistress of Atrocity — is an infernal demon that looks like a beautiful female humanoid with butterfly wings. She feels light, fast, and fluid by comparison.

These two creatures help Bayonetta handle some of her more sizable foes. Based on what we’ve seen thus far, facing off against behemoths the size of buildings is fairly common in Bayonetta 3. And you can swap between them on the fly, which only increases the potential for chaotic fun.

Bayonetta also gets access to more demons later on in the game, but only these two were present for the demo.

Absurdity at its best

Partway through the demo, there’s a chase sequence in which Gomorrah blasts its way through the city of Tokyo, demolishing dozens of buildings in a way that feels pointedly Godzilla-esque. This is an on-rails segment that is a sheer spectacle. After some light platforming, you eventually end up in a canal, which is where Bayonetta 3 leans into the silliness by having Gomorroah land on two boats and use them as water skis.

It was truly one of the standout moments of the experience, offering a bit of humor without sacrificing the badassery.

The next section threw me into a fight against multiple supersized demons, testing the skills I had learned up until this point. The player can approach battles however they might want, but it definitely helps to keep mixing things up to increase your combo and therefore score (which also serves as your currency to buy items at the shop).

I constantly had to switch between fighting smaller enemies and the more gigantic foes, swapping between my own demons on the fly. This ebb and flow is engaging, to say the least, and offered a lot of incentive for leaning into a state of flow and juggling attacks and dodges with precise timing.

Bayonetta games constantly escalate the intensity; That’s part of their enduring charm. But I wasn’t prepared for just far PlatinumGames would take things here. Thankfully, it seems like Bayonetta 3 will once again be a knockout hit, due in part to the way it experiments with massive, bombastic battles that drastically increase the scale without sacrificing any of the fast-paced demonic chaos.

More like this
Gaming
Sep. 11, 2022
Read Only Memories: NEURODIVER refines the first game’s pixelated charms
By Jess Reyes
Gaming
Sep. 10, 2022
GALAHAD 3093 is the hero shooter we have been waiting for
By Joseph Yaden
Gaming
Sep. 20, 2022
Harvestella rises above an overgrown field of farming sims
By Willa Rowe
Related Tags
Share: