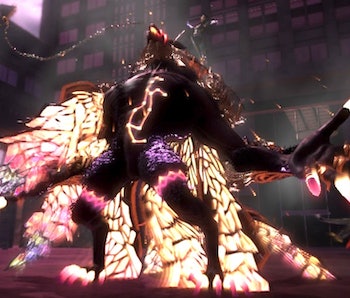 Not all werewolves are alike. In Bayonetta 3, the game introduces you to its first reoccurring boss called the “Twilight Wanderer - Strider” (or Beastman) in Chapter 2, who happens to look like a werewolf with the glowing red eyes of an arachnid.

Chapter 2 takes place in broken modern-day Tokyo — complete with derailed subways and crooked skyscrapers. Verse 8, the last section in the chapter, features two parts: an unassuming battle with jellyfish homunculi and the boss fight with the Twilight Wanderer Strider.

If you’re new to Bayonetta, you might have a difficult time getting accustomed to his chaotic attack patterns. Here’s how to get through both phases for Chapter 2 Verse 8 in Bayonetta 3.

How to beat Light Flotation Combat Unit - Pannus (a.k.a. Jellyfish)

Pannus should be familiar homunculi at this point because it served as a higher-level homunculi “boss” at the end of Chapter 1. It has a few attacks to be wary of, including charge attacks, spinning attacks, and duplication:

How to beat the Twilight Wanderer Strider

The Strider tests your dodges with his emphasis on close combat. He moves far away, baiting you in, but sweeps in just as quickly with a flurry of claws. Here are a few pointers for taking him out:

Note: Icons change to a little skull in the lower lefthand corner when demons are “dead,” and switch back to normal when they’re ready to fight again.

Bayonetta 3 is available no for the Nintendo Switch.