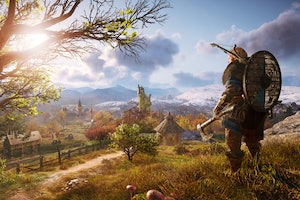 French developer and publisher Ubisoft is already hard at work on the next Assassin’s Creed game, codenamed Infinity.

The company released a statement on July 7 acknowledging the existence of Infinity, though it didn’t provide many details about its setting or how it might compare to previous entries in the series. However, a Bloomberg report published the same day indicates that Infinity will be a “massive online platform that evolves over time.” This, if true, could be the biggest change the series has undergone in its 14-year history.

Based on the report, it seems like Infinity will be taking cues from Fortnite and Call of Duty: Warzone, serving as a platform that will be around for a long time.

Many successful live-service titles exist mostly independent from a larger franchise. This isn’t always the case, but games like Fortnite, Minecraft, Destiny 2, and Rocket League fall into this category.

Then there are other games like Call of Duty: Warzone that exists alongside annualized main numbered installments, most recently with Black Ops Cold War. Not only does this allow for multiple avenues to enjoy the franchise, but Warzone evolves with each subsequent entry. There’s also Apex Legends to consider, which exists within the Titanfall universe while the franchise remains mostly dormant otherwise.

Will Infinity be separate from mainline Assassin’s Creed games but have some synergy (like Warzone) or will this new initiative replace the standalone releases going forward (more like Destiny 2)? There’s merit to both options, but whichever route Ubisoft decides to take will undoubtedly be a major change for the franchise.

3. Will Assassin’s Creed Infinity have a competitive multiplayer component?

Again, when drawing comparisons to major live-service games, almost all the heavy-hitters have a competitive aspect, whether it’s outlasting the competition in Fortnite or scoring more goals than your opponent in Rocket League.

Assassin’s Creed is no stranger to competitive multiplayer, even though single-player has always been the focus. The past few entries — Origins, Odyssey, and Valhalla — have felt more in line with the live-service style, so it’s possible Infinity will mirror that formula.

If Ubisoft aims to make Infinity a leading live-service game, however, some sort of competitive aspect will basically be a requirement. Since competitive multiplayer has never been one of the series’ strengths, developers may have to take some bold risks with this.

Perhaps it will lean more into cooperative play, wherein players will be able to complete missions and explore together, rather than against one another. Or it could be a smattering of both, like a better alternative to Hood: Outlaws & Legends. Or it could even function like the Ghost of Tsushima multiplayer. At this point, it’s too early to say for sure, but it will be interesting to see how this unfolds.

2. Will Assassin’s Creed Infinity be free-to-play?

Live-service games have become so popular thanks in large part to how much revenue they generate. They’re monetized in a variety of ways, but the biggest earners tend to be optional cosmetics or in-game items that can be purchased at any time. In conjunction with that could be the ubiquitous battle pass model, or even the Destiny 2 approach, which involves annual updates to the base game that cost extra.

With Infinity falling into the live-service category, it’s at least possible that it’ll take the free-to-play approach like Warzone, League of Legends, or Fortnite with additional items available for purchase and/or a battle pass.

If Infinity is a paid platform, that will become a much tougher sell. MMOs like World of Warcraft and Final Fantasy XIV: A Realm Reborn remain very popular despite monthly subscription fees, but it’s becoming increasingly rare in the industry at large. That’s likely due to the large number of free-to-play experiences out there. No matter which route Infinity takes, it will live or die based on its monetization.

1. How will Assassin’s Creed Infinity updates work — and how often?

How the game’s setting and time period will evolve over time is one of the most interesting things to ask. Assassin’s Creed has famously covered a variety of historical time periods and settings like Ancient Greece, Egypt, and the Revolutionary War.

With previous installments, it made sense for each one to take place during a new time period since they exist as standalone experiences. But Infinity is one game theoretically meant to change over time. From a continuity standpoint, things could get messy very quickly. Will updates add new time periods and/or settings into the mix? Will they add new cities all set within the same time period?

Along with that comes obvious questions about progression. It might not always make sense for your gear to carry over from setting to setting depending on time period differences. It’s certainly something that has a reasonable solution, but we worry Ubisoft might struggle to reach that point.

Assassin’s Creed Infinity can go in a lot of bold new directions, but it remains to be seen if Ubisoft can meet those ambitions.

More like this
Gaming
17 hours ago
You need to play the best game about demolishing rich people’s stuff ASAP
By Mo Mozuch
Gaming
16 hours ago
Overwatch 2 support players are finally getting some respect
By Robin Bea
Gaming
13 hours ago
15 huge video games coming in the second half of 2022
By Robin Bea
Related Tags
Share: