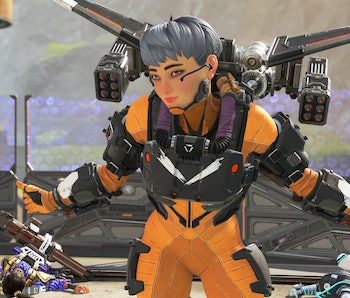 Valkyrie takes center stage as the Apex Legends anniversary event carries on. Through March 1 the Japanese recon specialist will be available for all players to download, prompting lots of discussion about how the jet-focused character contributes to the current meta. Below, we outline all you need to know about Valkyrie, her abilities, and her time-limited free download. Let’s fly through all the important details.

How to unlock Valkyrie for free in Apex Legends

As a part of the ongoing Anniversary Collection Event in Apex Legends, Valkyrie is the last of three previously premium Legends to be offered without a price tag. Her free period runs from February 22 at 1 p.m. Eastern through March 1 at 1 p.m. Eastern. If you want to see what this character is all about, you’ll need to log in to Apex during that time period.

Once you have, Valkyrie will become a freely selectable part of your character roster as a Year 3 Anniversary Gift. There are no other steps required. She automatically unlocks as long as you launch the game during the aforementioned dates.

What are Valkyrie’s abilities in Apex Legends?

Valkyrie debuted in Apex Legends at the start of Season 9 last April, and since then her abilities haven’t evolved all that much.

With this kit, many pro Apex Legends players feel Valk may be the best movement-based Legend in the game up to this point.

Best tips to win as Valkyrie in Apex Legends

Now that you have Valkyrie in your arsenal, it’s time to make the best use of her skills. We’ve assembled six essential tips to ensure you’re the best Valk player on your team.

That’s all you need to know to dominate as Valk in Apex Legends.