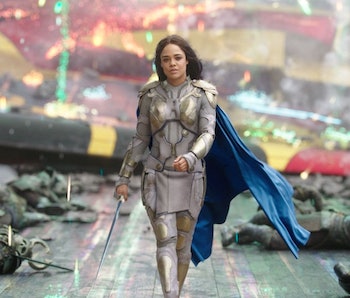 Valkyrie is charging back into the Marvel Cinematic Universe, and she’s returning with a new look. Not only is she sporting a new outfit, but the color scheme is a nod to how Valkyrie originally appeared in the Marvel Universe.

In a selfie taken by actress Tessa Thompson on the set of Thor: Love and Thunder, and shared by Twitter user @ReginaBenavid18, Thompson is seen wearing a new Valkyrie outfit. While the source of the image remains vague, it’s all over social media and you can see it for yourself here.

Black and Silver — While Thompson’s hair is done up in an arresting braid, her costume bears a closer resemblance to Valkyrie’s signature black and silver armor that she worn in her earliest comic book appearances.

Still, the nod to Valkyrie’s comic book history in the MCU is a fascinating one. It doesn’t hint at any potential new storylines for Valkyrie — she’s more likely to be claiming her place as Asgard’s new leader than joining up with the Secret Avengers like she did in Ed Brubaker’s 2010 run — but with Love and Thunder Valkyrie will have had both of her signature comic book costumes make it to the screen. Now all she needs is a cape.

The Inverse Analysis — While the new costume looks great, there’s no rhyme or reason to why characters wear certain comic book-inspired looks for any given movie or show other than what the creative team calls for, so we can’t speculate too much here.

Valkyrie wore both a plain black leather outfit and her white and gold Valkyrie armor (also inspired by the comics; see “Vengeance! Cries the Valkyrie” from The Defenders #109) in 2017’s Thor: Ragnarok, and now her black and silver armor will appear in Love and Thunder. Thanos went out collecting the Infinity Stones, but Valkyrie is out here collecting her fits.

Thor: Love and Thunder will strike theaters on July 8.