love in the time of coronavirus

During Covid-19, one groom came up with a brilliant fix for his canceled wedding

“Keeping it a secret was half the fun." 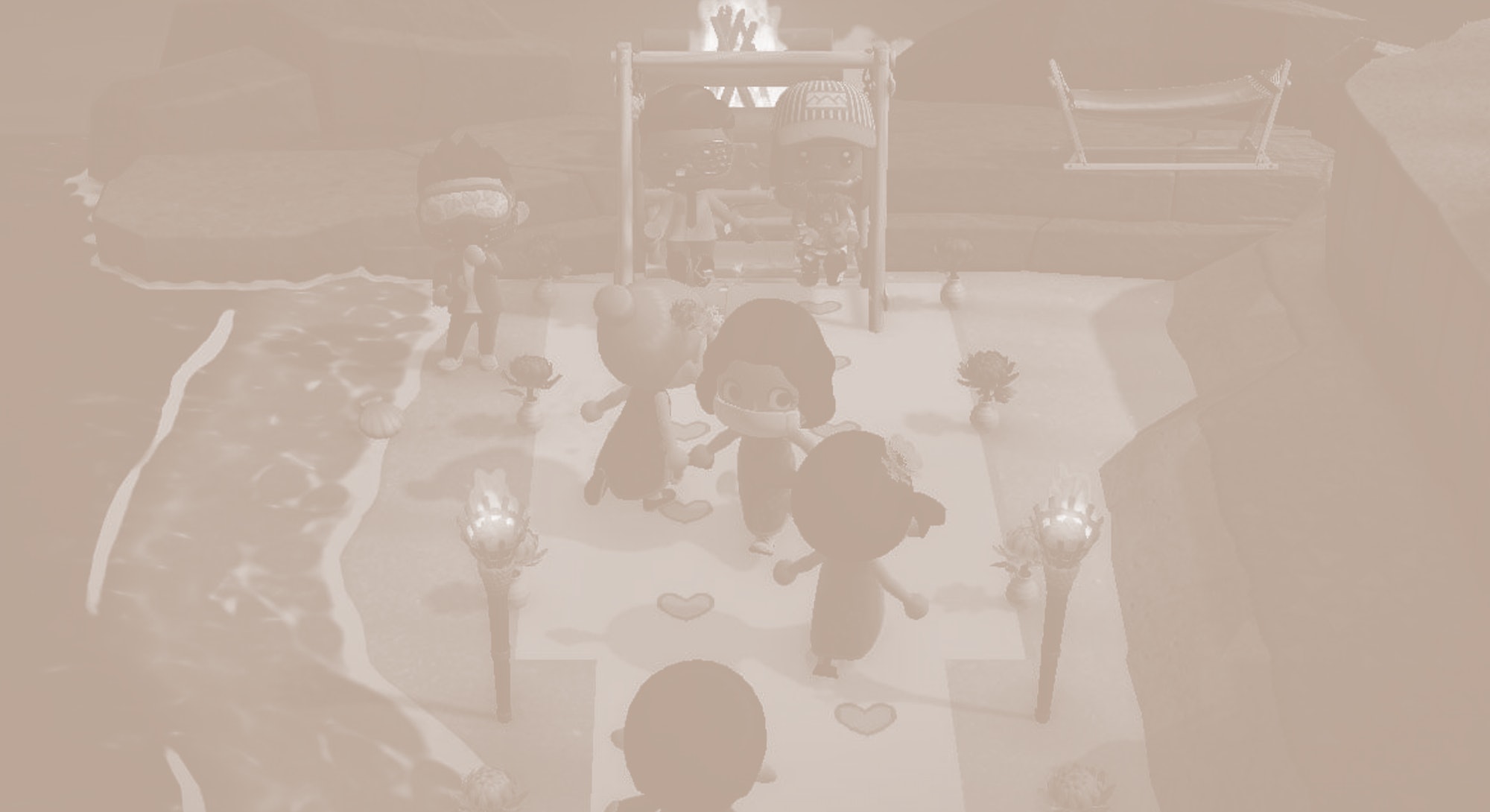 A surprise wedding on a tropical island is still a grand romantic gesture, even if it’s in a video game.

Nintendo’s Animal Crossing: New Horizons has offered a brilliant escape from daily life while much of the world is practicing social distancing and self-imposed quarantines over the Covid-19 pandemic. But for a New York City couple, the new video game also provided a literal escape from the world as they planned their wedding. It's a little strange, but Sharmin Asha and Nazmul Ahmed, both 28, got married inside Animal Crossings.

They began dating in April 2016 and got engaged in June 2016 in Costa Rica. Ahmed popped the question in a butterfly garden.

They planned their wedding for April 12, 2020 at a hip Brooklyn venue with a “gorgeous atrium." Some 100 friends and family were invited. The couple had plans for a honeymoon right after, just before Asha's medical residency rotations began this summer. Whatever plans they had were erased by the novel coronavirus.

Thankfully, they still had Animal Crossing: New Horizons, which was released by Nintendo for the portable Switch gaming system on March 20.

Animal Crossing is the game of the moment — Nintendo’s newest game offers players an attractive escape path from the real world. Through New Horizons, they’re able to connect with friends online (the game is outpacing recent Nintendo hits like Pokémon Sword and Shield and Super Smash Bros. Ultimate, according to this report).

The game also created the opening to celebrate their nuptials, even though their in-person wedding was canceled.

On March 22, Sharmin Asha, Nazmul Ahmed, and five of their closest friends gathered online for a virtual beachside wedding. “I wanted it to look like those really cute beach weddings you see at the end of rom coms,” Ahmed says.

Asha shared a screenshot of what was likely the first Animal Crossing wedding ever to the game’s subreddit community with the title “My fiance and I had to cancel our upcoming wedding due to Covid-19, so our best friends gave us a surprise animal crossing wedding instead.” It quickly rose to the top of the forum with more than 32,000 upvotes.

“My fiancé planned it out with our best friends,” Asha writes in her original Reddit post. “I’m graduating from med school and not getting a graduation and our wedding was canceled. I was feeling pretty down about missing out on my milestones. This made me so happy, I don't even have the words to describe how much it meant to me.”

As the coronavirus pandemic spread, New York City became “the epicenter of this [coronavirus] crisis in the United States of America,” as NYC mayor Mayor Bill de Blasio said in March. Asha and Ahmed’s nuptials were canceled by their venue not long after President Donald Trump issued a declaration that limited social gatherings to no more than 10 people.

Along with 8.6 million New Yorkers, they’ve been told to stay home and self-isolate for the foreseeable future. Nobody has a firm grasp on precisely how long this will last, but it’s become clear that Asha will begin her residency right around the time the coronavirus begins to dissipate later this year. Even in the best-case scenario, the entire healthcare industry of the city will be devastated, and she’ll be among the people stepping up to restore it.

“We're all excited to start, even during all this, just so we can begin helping,” she tells Inverse. “We offered to help with the patient load in the hospitals, but our school thought it best to cancel rotations for now.”

Like many Americans, Ahmed recently lost his job due to layoffs triggered by the coronavirus and the economic uncertainty that’s followed. “Unfortunately, I got laid off earlier this month due to a weak market forecast and my project being unexpectedly canceled,” he says.

Like so many people stuck indoors with little else to do, the newlyweds turned to video games.

Ahmed is more of a gamer than Asha, but between her med school rotations, they’d played Pokémon Sword and Shield and Stardew Valley, a relaxing indie game about farming. Picking up Animal Crossing was a no-brainer.

“We saw Animal Crossing had a similar vibe as a farming/home life simulator that we could play together,” Ahmed says. They spent that first weekend after the game was released huddled together playing the game, going on little dates visiting each others’ islands inside the game.

Then Ahmed had an idea: He would surprise Asha with an in-game wedding. And he could invite a handful of their friends to his island. He found a romantic strip of digital beach on the western coast of his island. It would be the perfect setting.

“I wanted to show her even though we can't meet physically as a group, we still have a ton of friends and family that love and support us,” he tells Inverse. “I thought doing an event through Animal Crossing could be a fun way of showing that.”

Ahmed’s preparations took several hours and involved crafting a suit for his character that resembled the real one he’d planned to wear at their wedding. By gathering materials in the game and crafting with some DIY recipes, he also built a reception area where guests could sit down, a carpet runner embroidered with the couple’s initials, and an altar that consisted of a swing with a bonfire in the background. The beach was lined with tiki torches, potted flowers, and other tasteful decoration.

The ceremony included five of their friends who congregated on Ahmed’s New Horizons island to surprise Asha.

“Keeping it a secret was half the fun,” Ahmed says. “So for half the day she kept asking me what I was doing and I kept giving her really vague answers while stringing her along.”

At a time when we’re all stressed and stuck indoors, sharing the quaint and downright cute things we experience in Animal Crossing provides a welcome respite from the tedium and stress that comes with living under self-imposed quarantine.

Nobody could have predicted that Animal Crossing, a chill game where players are whisked away to an idyllic deserted island to make friends and generally explore would become an emotional life preserver. But Animal Crossing is uniquely suited to give players with a soothing distraction.

“This experience is really frustrating for everyone,” Asha says. “But at times like this, I really appreciate my fiancé and my friends for giving me so much happiness and support.”

The honeymoon, also canceled, isn't looking so great, Ahmed admits. "I was slow rolling our honeymoon plans even before Covid flared up. So we hadn't settled on a particular plan. We are going to try and do a small road trip down East Coast when the quarantine clears up."