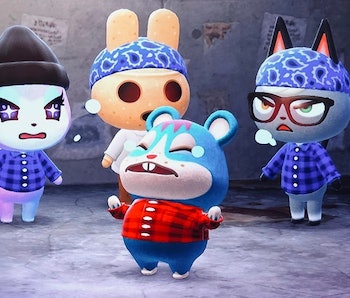 Meet Rodney, the tubby, teal-skinned hamster who has become the most publicly hated villager in all of Animal Crossing: New Horizons, so much so that 3,668 people are dedicated enough to join an entire subreddit just for "hating the Rodney villager from Animal Crossing."

Rodney is one of the 397 villagers that can potentially move into a player's island as they progress through the game. The thousands of gamers in the r/FuckRodney Reddit community would rather burn the buck-toothed rodent at the stake than give him one of the 10 spots available in their tropical island paradise.

“I got the idea for making the subreddit from an inside joke with my friends that started at the Animal Crossing Direct,” Oliver, one of the subreddit's co-founders, tells Inverse. “‘Damn, Rodney looks like a chubby ass hat!’ or something along those lines. The majority of my friends hate Rodney, [too].”

Oliver started the subreddit with a close friend right after they saw their arch-nemesis for the first time during the February 20 Animal Crossing Direct. Rodney appears 18 minutes, 8 seconds into the 28-minute presentation as a potential resident visiting the player's Campground. He gently boasts about being on vacation and says that he's "just relaxing and focus-grouping a few things." We never learn what, but it's definitely in line with his "Smug" personality type.

Days later, Oliver and a close friend Mat expressed their mutual hatred for the Rodney by forming r/FuckRodney to share memes and other jokes dunking on the hamster.

As of May 21, close to 3,700 Redditors have joined the anti-Rodney group to share their love for hating the smug villager.

And they aren’t afraid of letting Rodney and the internet know how much they despise him.

Members of r/FuckRodney have posted screenshots of them building barricades around Rodney's house, of them trying to get him to jump into a river, and even videos of them torturing the critter. (Don't worry, the worst thing you can actually do in Animal Crossing is smack someone in the face with a net.) The goal with actions like these is to get Rodney to leave the island and make space for “dreamies,” or highly sought after villagers, like Raymond the cat that some players will spend actual money procuring.

But what does Raymond have that Rodney doesn’t? According to his legion of haters, literally everything.

Why do players hate Rodney?

Once you get past its chill vibes and adorable aesthetic, Animal Crossing is at its core all about perfectionism. There's literally an endgame mechanic that allows you to terra-forming any part of the island with a shovel, and that includes delicately rounding the edges of waterways and cliffs. There's no wrong way to do anything, so instead players dedicate all their time to making their islands flawless, and that includes ensuring their tropical utopia is populated by the most stylish and in-vogue villagers.

By most accounts, Rodney is not one of those villagers.

Each villager comes with their own style in the way they dress, speak to players, and decorate their home. Each player has their own preference, but oftentimes the most popular villagers have some kind of unique trait. In Raymond’s case, it’s his heterochromia (he has two different-colored eyes), and even though the cat is also of the "Smug" archetype, he's still somehow polite, lively, and always urges everyone to "stay on brand!"

Oliver tells Inverse that Rodney sorely lacks any enticing qualities like these.

“I generally don't like anything about Rodney,” said Oliver. “The only thing I don't particularly despise about him is his furniture taste, yet even that is mediocre.” Rodney's wallpaper looks like an old-timey ice cream parlor and is decorated like a vintage arcade lounge that's decades old, which is much more fun than Raymond's drab office setup.

At the end of the day, these are just opinions but even the most scientific measurements of villager popularity have Rodney in dead last place. The Animal Crossing Portal has a regularly updated villager popularity ranking based on players’ responses to a poll. Rodney can be found in the bottom tier of this list. But that doesn’t mean that the entire Animal Crossing player base despises Rodney.

A much smaller subreddit (223 members) called r/RespectRodney was started in April in response to the widespread hamster hate. So cheer up, Rodney, you aren't hated by everyone online ... just by several thousand more people than the average hamster.

Animal Crossing: New Horizons is available only on the Nintendo Switch.

More like this
Gaming
4 hours ago
You need to play the most exhilarating free game on Nintendo Switch Online ASAP
By David Grossman
Gaming
8.8.2022 5:15 PM
Street Fighter 6 fans are obsessed with Juri’s new design
By Willa Rowe
Gaming
8.11.2022 3:00 PM
Everything you need to know about Kirby’s Dream Buffet
By Robin Bea
Related Tags
Share: