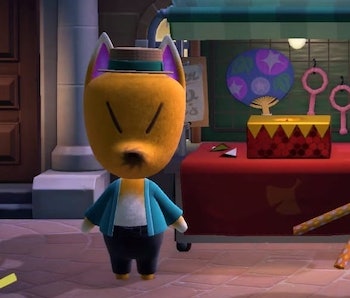 The Museum of Modern Art better watch out. When it comes to fine art, few equal the inventory of Redd the fox in Animal Crossing: New Horizons home Redd is a shady art dealer who peddles questionably authentic art to you for far less than the original price. He sells only definitive classics like Mona Lisa, Starry Night, and Girl with the Pearl Earring. Once purchased, the art can be placed in your home or donated to Blathers for museum purposes.

Unfortunately, before you can get the prestigious art, Redd will attempt to scam you. You'll be shilled either a fake or haunted piece of work. If you lack an art history degree, differentiating a real masterpiece and a forgery can feel challenging. To make things a bit easier, try using our guide.

If you have yet to unlock Redd, please check out our guide on making the Animal Crossing Kitsune appear.

How can you tell the difference between a real and a fake?

Redd's purchasable inventory is based on real-life works of art. Google is your ally. If it’s fake, the piece will feature slight differences from the real one.

Redd’s forgery of "The Girl with a Pearl Earring," features a sapphire earring rather than the titular pearl earring. Each fake has a distinct visual difference. Unfortunately, They won’t be given their real-world titles until you’ve donated them to the museum, which makes sorting out what's real or fake rather challenging.

Just for you, we've in-game artwork names with their real-world counterparts below, so you don’t have to do any guesswork. Just compare Redd's wares to the real-life image and consider the differences that we've detailed here, and sorting it out should be fairly easy.

You can also try using the mobile app, Smartify, available for both iOS and Android, which scans historic pieces and provides information about them. Much to Redd's dismay, the app will recognize forgeries as the real deal. This will show you the real art piece and its name well before conversing with Blathers, thus deflating the scammer's operation.

Occasionally, Redd will sell haunted artwork, meaning it'll display spooky properties like eyes that follow your every movement. Spooky pieces are considered fake and thus ineligible for inclusion in Blathers’ museum, but you can still put them in your home as potential murder mystery party decor.

What happens if you buy a fake?

If you purchase a fake, Blathers won’t accept it for his museum, nor will you be able to sell it. Your fake can either be recycled or you can proudly display your shameful purchase on your wall. Unfortunately, you can only buy one piece of artwork per day, and Redd only visits once per week, so you won’t have a chance to rectify your mistake until Redd visits again on a later date.

How to purchase from Redd more than once a day

Each user registered on your Switch can purchase one piece per Redd visit. If there are four users on your Switch, you could theoretically purchase everything Redd brings, therefore obtaining a genuine art piece with certainty. Though pricey, this method is the only surefire way to make sure you get something authentic whenever Redd visits.

You can also ask other players to come to your island and purchase some art on your behalf. Be warned, if a person does buy from your Redd, they can't buy from a different Redd spawn on the same day. If the player lucky enough to get Redd on their island that same day, they'll be unable to purchase anything from him.

How to get every Redd art piece in a single day

Redd's wares are also vulnerable to Animal Crossing's time travel cheese. You can learn how to use it to exploit Redd right here. This can help you in obtaining all 40 paintings and statues in possibly just an hour or two of your time, rather than the nearly two-year odyssey that Animal Crossing: New Horizons defaults him on. Nobody has time for that.

Academic Painting ("Vitruvian Man” by Leonardo Da Vinci) — The fake copy has tea or coffee stains in the top-right corner.

Amazing Painting ("The Night Watch” by Rembrandt) — The fake copy removes the hat from the figure in black in the center of the painting.

Basic Painting ("The Blue Boy” by Thomas Gainsborough) — The boy in the fake copy has bangs.

Calm Painting ("A Sunday Afternoon on the Island of La Grande Jatte” by Georges-Pierre Seurat) — There isn't a forgery of the Calm Painting, so this one's always real.

Detailed Painting ("Rooster and Hen with Hydrangeas” by Ito Jakuchu) — The fake copy has purple flowers rather than blue.

Famous Painting ("Mona Lisa" by Leonardo Da Vinci) — The fake copy has the Mona Lisa's eyebrows pointing up with a disdainful expression that most people should be able to spot. We quite like it, though!

Graceful Painting ("Beauty Looking Back” by Hishikawa Moronobu) — The fake copy of Graceful Paintings features a much larger version of the woman that occupies most of the canvas. In the real Graceful Painting, the top third of the canvas is empty. This painting is haunted and some fakes will change at a certain time of day. The haunted version will flip the image horizontally, and the woman's outline becomes visible on the rear of the painting.

Jolly Painting ("Summer” by Giuseppe Arcimboldo) — The fake copy is missing the sprouting flower coming from the figure's chest in the bottom right corner of the original.

Moody Painting ("The Sower” by Jean" by François Millet) — There isn't a forgery of the Moody Painting, so this one will be real.

Moving Painting ("The Birth of Venus" by Sandro Botticelli) — The fake copy removes the trees just behind the figure on the right of the genuine painting.

Mysterious Painting ("Isle of the Dead" by Arnold Böcklin) — This one is always real.

Scenic Painting ("The Hunters in the Snow" by Pieter Bruegel) — The fake copy of Scenic Painting is missing a third hunter between the trees on the left.

Serene Painting ("Lady with an Ermine" by Leonardo Da Vinci) — The fake copy of Serene Painting features a miscolored grey/blue ermine ("or stoat, if you prefer); the original is white/cream all over.

Solemn Painting ("Las Meninas" by Diego Velasquez) — The fake copy of Solemn Painting has the man in the doorway in the background pointing upwards; in the real Solemn Painting, he's reaching out in front of himself with his arm at an angle.

Warm Painting ("The Clothed Maja" by Francisco Goya) — There isn't a forgery of the Warm Painting, so trust Redd for once.

Wistful Painting ("Girl with a Pearl Earring" by Johannes Vermeer) — In the fake, the shape of the pearl earring is changed to a star. A 'haunted' version of this painting exists – it shows the girl with her eyes closed, also with the star-shaped earring. This change takes place at a certain time.

Worthy Painting ("Liberty Leading the People" by Eugène Delacroix) — There isn't a forgery of the Worthy Painting, so trust Redd for once.

There are 13 statues to collect in Animal Crossing: New Horizons.

Ancient Statue ("Dogū" by Unknown) — The fake copy of Ancient Statue has a pair of antenna-like 'ears'. A 'haunted' version of this statue exists which, at a certain time, has illuminated eyes and makes it levitate.

Great Statue ("King Kamehameha I" by Thomas R. Gould) — There isn't a forgery of the Great Statue, so trust Redd for once.

Robust Statue ("Discobolus of Myron" by Unknown) — The fake copy of Robust Statue has a wristwatch on its right wrist.