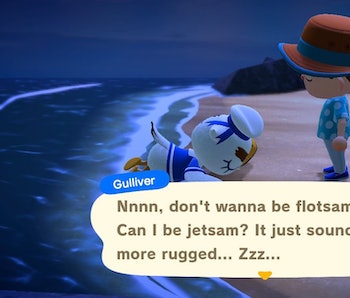 Many things can be found on the coasts of your shore in Animal Crossing: New Horizons. Perhaps you’ll spot a message in a bottle, resulting in a new DIY recipe. If you go at night, there’s a chance you’ll meet Wisp, the island resident ghost. Randomly, a Seagull named Guillver will also wash up on your island.

If you know how to help him wake up, he’ll have a task for you and a chance at exclusive awards.

How to wake up Gulliver in Animal Crossing: New Horizons

When you first encounter the shipwrecked fellow on your shores, he’ll be seemingly knocked out cold and unresponsive to any interaction. Continue interacting with him until he mumbles himself awake and begins speaking to you directly. Gulliver will wake up eventually, whether he wants to or not, so just keep engaging him. When he comes to, the seagull will realize that his communicator was busted in the accident that shipwrecked him on your shore.

He’ll ask that you help him recover the five lost parts.

How to find the communicator parts for Gulliver in Animal Crossing: New Horizons

Gulliver will tell you that the five missing parts can be found somewhere in the sand. What he means is that you’ll have to shovel up areas on your beaches to uncover the communicator parts.

The sand containing communicator parts will be denoted by small emerging water spouts. These are the same ones New Horizons uses to show Manilla Clams, so don’t be surprised if you dig one of those up instead.

The various parts will spawn incrementally. It might take you a few runs to collect the five parts that Gulliver is requesting, but if you keep running up and down your beaches, you'll find them. Bring all five parts back to the Seagull for an exclusive item that he says he'll send along in a few days' time.

Make sure that you return the items on the same day Gulliver assigns the quest, which is to say that if you engage him enough to begin the quest, spend the time to complete it right away. If you collect any but fail to return them by the next day, Gulliver will disappear and the items will turn into rusted parts, rendering them useless for the quest.

What reward does Gulliver provide in Animal Crossing: New Horizons?

After rescuing Gulliver from his communicator-less struggle, you’ll be rewarded with an exclusive item based on various famous cultures from around the world. It might be a furniture piece modeled after a famous real-world monument like the Leaning Tower of Pisa or the Statue of Liberty. You might also receive some attire based on cultures throughout the world. Perhaps you’ll get a Kaffiyeh or Candy-Skull Mask. Whatever you receive, it will arrive in your mailbox the following day.

Gulliver’s quest can be completed more than once; There’s even a Nook Miles achievement available for those who do it numerous times. Check the shore every day, because Gulliver may have been shipwrecked during his travels yet again.