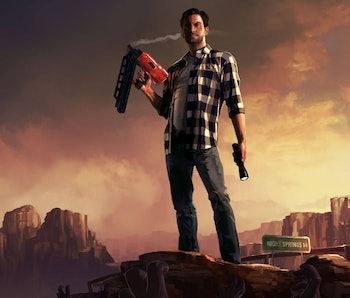 Horror fans rejoiced when Remedy Games announced a sequel to the cult classic Alan Wake. What you might not know, however, is that there’s already a second chapter to Alan Wake’s story, with the pseudo-sequel and spin-off, Alan Wake’s American Nightmare. It’s a fascinating game that builds on Alan’s character in some dynamic ways and practically feels like an episode of The Twilight Zone brought to life. If you want to get American Nightmare for free, you have until October 31, 2002, to play it as part of Xbox Game Pass.

Alan Wake has always put its focus squarely on psychological horror, and American Nightmare only ratchets that up to eleven. The Alan Wake universe has a TV show called Bright Falls, essentially the in-universe equivalent of The Twilight Zone. American Nightmare’s story is framed as an episode of Bright Falls, dropping Alan into an eery version of Night Springs, Arizona.

As Alan finds out he’s been missing from the real world for two months, his fiendishly evil doppelganger Mr. Scratch appears, in turn revealing he has control of hordes of the otherwordly creatures known as Taken. Mr. Scratch is absolutely the highlight of American Nightmare, showing a darker, deeply sociopathic side of Alan’s personality. All of Mr. Scratch’s scenes are delivered in live-action by the actor that plays both him and Alan, and he does a phenomenal job of injecting the character with an unhinged edge, almost like Jack in The Shining.

The story is not nearly as much of a focus this time around, however, focusing more on Alan’s personality and mental state, rather than pushing the overall narrative of the series forward. The relationship between Alan and Mr. Scratch is the heart of the experience, and the tug-of-war between them is great fun to see play out. What that means, however, is the stakes feel much lower, but that’s not necessarily a bad thing, as American Nightmare excels in other areas.

While American Nightmare still has plenty of horror elements, its general aesthetic feels more like a pulpy B-movie, and because of that, the game makes some huge strides to improve Alan Wake’s gameplay. The speed of combat has been slightly increased for American Nightmare, along with the general controls being tightened up. Apart from that, however, Alan has a more robust flashlight to blast the darkness off of Taken, and a host of new weapons like a crossbow, nail gun, and machine gun. Alan Wake’s gimmick of switching between the flashlight and firearms is put to even better use here, as the game consistently throws unique enemies and combat encounters at you.

Although shorter than Alan Wake, American Nightmare has overall better pacing, moving players through a series of locations that all feel like vignettes from an episode of TV. You visit a motel, observatory, and drive-in movie theater, which all sport a fittingly spooky look.

American Nightmare fills a strange place in Remedy’s library, lacking a lot of the polish and bombast that the studio’s titles usually have. However, those rough edges are part of what gives American Nightmare its unique personality. What’s truly impressive about American Nightmare is that the game was so willing to diverge from the style and tone of its predecessor, and create a much different-feeling experience in the process. American Nightmare may only last a few hours, but it’s a must-play for anyone looking forward to Alan Wake 2.