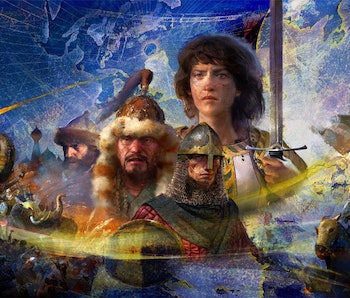 History is everything. Literally, it's the stuff that's happened, is happening, and will eventually happen. While compelling, the scope of our history is hard to comprehend. Most media can’t capture the saga and scale of hundreds of years in a single movie or television season (time jumps, anyone?) But video games can. And one legendary franchise has been doing it for 25 years.

Age of Empires from Ensemble Studios launched in 1997 with a simple premise: conquest. Players could dive deep into the real-time strategy format to manage real-world empires, and take them from the Stone Age to the Iron Age through economics, research, and, most importantly, military might.

A lot has changed in 25 years, but the fundamentals of good gameplay haven’t. Age of Empires IV was released in 2021 and stayed true to the formula that has served the franchise for decades. The campaign is a brilliant historical tour-de-force complemented by real-world footage of actual locations. You’ll experience the stories of the Normans, the Hundred Years War, the Mongols, and the Russian Empire in four separate campaigns. There is an incredibly gracious learning curve for new players, making it a great place to begin (especially if you’re a rusty veteran).

It’s a reliable formula. Start small with a few villagers and a scout. Gather resources and explore, but do it quickly. You receive updates when your opponents advance to new eras, which unlock better tech. They are not shy about using this advantage and sending troops immediately to bust up your utopia. This is not a cozy game. You feel the real-time in this real-time strategy, and it doesn’t take long for the hook to set and the hours to fly by.

The focus on military tactics is what sets Age of Empires apart from the other major player in the space: Sid Meier’s Civilization. There are no culture victories here, no arts or philosophers to explore. Your focus is to have enough men with pointy things to counter the other men with pointy things. Of course, this is easier said than done. There are layers to the combat in AoE that start with a basic rock-paper-scissors formula. Ranged units counter infantry, cavalry counter ranged units, and infantry counter cavalry.

The magic happens in the nuances between empires and their historical versions of these units. For example, English longbowmen are a force to be reckoned with but their cavalry stinks compared to the Mongols. Your armored knights will dominate until your rival discovers gunpowder. There is constant one-upmanship occurring from the very beginning of any game mode you play.

Beyond the campaign, AoE IV offers a few other game modes that cater to players of all skill sets. There are Art of War challengers, which are shorter, timed scenarios that help reinforce basics like resource gathering. The multiplayer is where the big dogs run, and if you’re looking for a serious challenge there’s none greater than a human opponent who likely has decades of experience.

There’s also the wide open playground of custom scenarios, where you can design just about any kind of experience you want. There are tons of maps, plus community content. Hundreds of years of history, and hundreds of hours of content await. Play it ASAP.