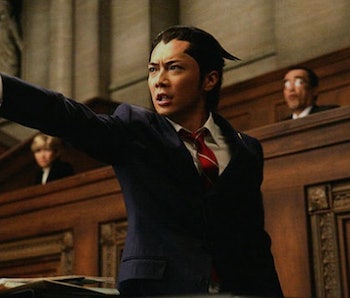 Courtroom thrillers are generally known as dramatic experiences that deal with hefty topics, like the limitations of justice and the legal system. While there’s plenty of entertainment out there that fits that bill, one film opts for a wildly different approach, using a mix of comedy, drama, and slapstick humor to create something that feels wholly unique. It just so happens that Ace Attorney, which can be streamed on Amazon Prime Video, is also one of the best video game adaptations ever created.

Ace Attorney is a 2012 film by the legendary Japanese director Takashi Miike, best known for films like 13 Assassins and Ichi the Killer. Miike was the perfect choice for a live-action adaption of Ace Attorney, bringing an indisputable sense of style and character to the film, while still staying incredibly faithful to the source material. If you aren’t familiar with the Ace Attorney video game series, both the games and the film follow a young defense attorney named Phoenix Wright.

The world of Ace Attorney is a warped version of modern-day Japan, where criminal trials have practically become a form of entertainment. Prosecutors and defense attorneys battle it out in a three-day trial, with citizens being able to buy tickets to the spectacle.

The film loosely adapts the events of the first game, picking up right on the heels of Phoenix’s first win as a defense attorney, with the help of his mentor Mia Fey. Things get thrown for a loop, however, when Mia is killed, sending Phoenix on a journey of discovery that reveals the shortcomings of the legal system.

Just like the original game, Ace Attorney is a deconstruction of the Japanese legal system, delivered through the lens of humor and slapstick comedy. Miike does a phenomenal job of adapting the tone and style of the games, right down to the absurd costumes and eccentricities of its characters.

Phoenix sports his odd slicked-back hairstyle and has a dramatic flair in the courtroom. Miles Edgeworth is Phoenix’s childhood friend and perfectly gives off a cold and detached air. Detective Dick Gumshoe is a bumbling man-child with a heart of gold. The characters are what really forms the core of Ace Attorney, but the film also does a great job of making these courtroom duels visually interesting.

The courtroom itself is a high-tech space that uses holographic displays and high-tech gadgetry to display evidence. These visual elements are used to great effect, letting characters throw holograms at each other to accentuate the whole “legal battle” idea.

There’s an extra layer of absurdity that makes Ace Attorney feel so vibrant and unique, with moments that instantly stand out. One scene sees Phoenix put a Cockatiel on the stand as a key witness, while another has a goofy mascot named the Blue Badger block the judge’s gavel just in time for a big witness reveal. Seeing the courtroom explode with confetti at the announcement of a not-guilty verdict is just the icing on the cake.

The Ace Attorney movie is the rare video game adaptation that knows it needs to keep the heart of its source material intact but provides something new on top of that. It’s a supremely faithful adaptation, but the performances of the actors and presentation help add a new dimension that isn’t there in its video game counterpart. Considering it’s a self-contained story, however, Ace Attorney can be enjoyed without any knowledge of the video games, especially for anyone interested in Japanese culture.

You don’t often see Ace Attorney mentioned in discussions of video game adaptations, and that’s likely because the film was never “officially” released outside of Japan, although it’s available with English subtitles on Amazon Prime and YouTube. It’s honestly a shame Ace Attorney doesn’t get more attention, as it serves as the perfect example of how to adapt a video game into live action, but still retain all the charm and personality.