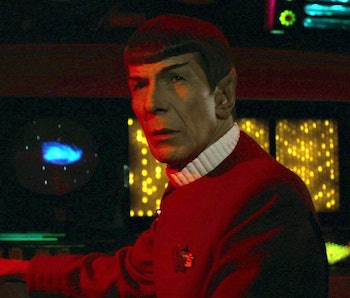 The hymn "Amazing Grace" originates in the 1770s, but many Trek fans associate it with the tribute to Mr. Spock at the end of Star Trek II: The Wrath of Khan. If you've always felt nerdy from associating "Amazing Grace" with Spock and Star Trek, it turns out world-famous classical cellist, Yo-Yo Ma feels exactly the same way.

In this spoken introduction, Ma talks about "the bright beam of hope" created by ordinary people who "helped us smile together." He then plays a brief version of the Alexander Courage-composed fanfare to the original Star Trek; a series of notes that have been present in every version of Star Trek since 1966. Give it a listen here.

Comments on various YouTube versions of the video noticed this, as did one official Star Trek Instagram account, Roddenberry Official, who noted, "On this day in history... Amazing Star Trek Grace by Yo-Yo Ma!"

The Wrath of Khan almost didn't include "Amazing Grace" in this scene. Producer Harve Bennett had to fight for the idea even though executives at Paramount were nervous. Speaking to Starlog in March 1983, Bennett related a story of having been to a memorial service in which "Amazing Grace" was played, which "moved him deeply." He also defended the choice of putting the music into The Wrath of Khan, telling Starlog, "It may be corny but sometimes, corny is the right choice."

For those of us hoping for a brighter future, Ma's quick tribute to Star Trek isn't corny at all —it's beautiful, and bold.

The Wrath of Khan is streaming on CBS All Access right now.