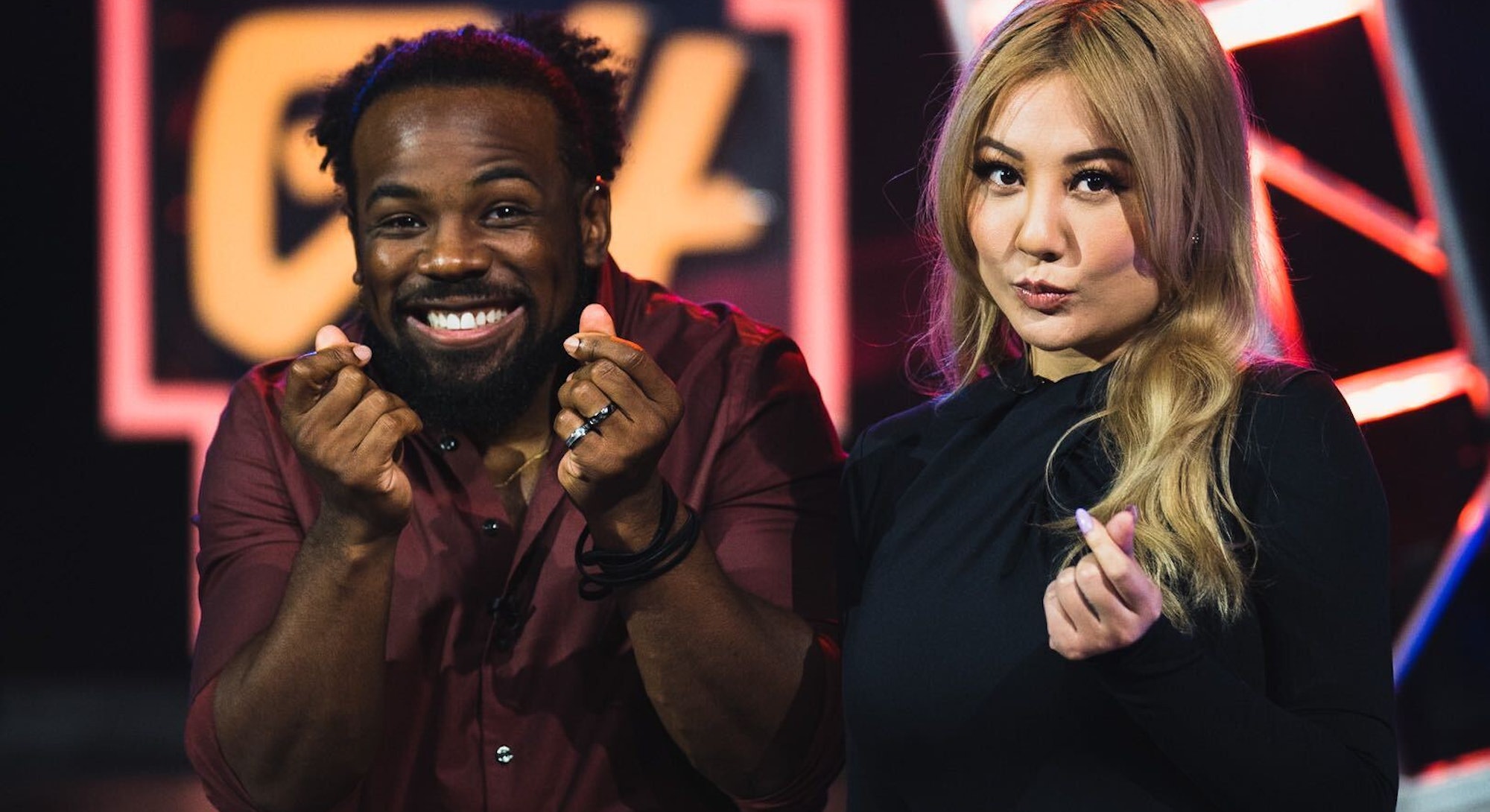 Professional gaming, or esports, is now the billion-dollar industry that analysts predicted and gamers dreamt of. But WWE star and G4 host Xavier Woods believes there’s still something missing in the scene: good old-fashioned trash talk.

“That trash talk element of pro wrestling, being able to create confrontation, is so good!” Xavier Woods tells Inverse. “But esports doesn’t have that on the level wrestling does. I’ve always wanted to match the two together.”

Over bites of lunch as his purple cape lay draped on a chair, Woods unpacks the philosophy behind his newest endeavor: co-hosting a reboot of the live competition series Arena with G4’s Gina Darling. The series premiered on June 29, and new episodes air on a monthly basis.

“It’s a weird space [we’re in] that’s really interesting,” Woods says. “Even with a League of Legends or Halo, if somebody doesn’t understand video games, they don’t understand what’s going on. If we can get them interested by having people trash talk like we do in wrestling, that gets them excited.”

Like in WWE, Woods says, powerful personalities attract viewers like magnets. Unlike other esports programs that present pro gaming like other pro sports, creating a distance between viewer and athlete, Woods hopes Arena can shake up esports like the swing of a steel chair.

“They go, ‘I like that guy.’ or ‘I like that girl.’ and follow that person on social,” Woods says. “Now we have one more person in the space. That person who doesn’t watch esports gets brought into this.”

Xavier Woods, aka Austin Creed outside the ring, is perhaps the perfect host for a show like Arena. He’s living the life of a WWE star, with multiple tag team championships and the 2021 King of the Ring title. But he’s also a veritable online gaming personality. In 2015, Woods launched his popular YouTube channel, UpUpDownDown, where he invites his WWE colleagues and other celebrity friends for rounds of League of Legends, Fall Guys, Tekken 7, and more. In late 2020, Xavier Woods was announced as one of the new hosts for the relaunched G4, operated by Comcast Spectacor.

With the return of G4 came a chance for Woods to synergize his showmanship with an intense passion for gaming. In its original run from 2002 to 2005, Arena strove to bring the nascent esports scene to cable TV. 20 years later, esports has evolved with more viewers tuning in to pro gaming than pro baseball, hockey, and basketball.

Arena has also morphed into something different — and bigger. “It feels like a big event,” Woods says. (At least, that’s what he’s hoping.) “This is one of the many next phases to help esports grow.”

In an interview with Inverse, Woods reveals how and why he’s bringing the spirit of pro wrestling to pro gaming, the reasons behind the new monthly format, and what games he hopes to spotlight in future episodes.

Inverse: What’s different about your version of Arena?

Xavier Woods: I’ve always wanted, when starting the YouTube channel, trash talk like in wrestling. That feeling of being in a safe space to be mad at your best friend. Like when you used to sit on the couch playing GoldenEye and that person with the proximity mine is just nasty, and you get so mad. I'm really hoping people see the vision and enjoy it.

What do you think wrestling-style trash talk and rivalries can do for esports?

If we can get somebody who doesn’t understand video games interested by having trash talk, that can get them excited. They go, “I understand League of Legends a little more.” or “I understand Street Fighter.” They follow [the esports pros] on socials, and when that person goes, “I’m going to be at Combo Breaker.” that person then wants to check out Combo Breaker. Now we have one more person at their first tournament, and the community grows.

It’s interesting how esports has the potential for rivalries like in wrestling, but the industry has never fully capitalized on promoting grudge matches.

I like video games because they're an escape. I go to this crazy world and have a good time. Wrestling is the same thing. You buy a ticket, and you immerse yourself into this world that's different from reality. People are creating conflict, and you enjoy what happens at the resolution of that conflict. I want to bring that to Arena. Obviously, it's different from what it was before. That’s why we have streamers, athletes, and internet personalities accompanied by pro wrestlers to help them. It’s the first big step.

How would you say Arena reflects esports as a massive, billion-dollar industry?

I think it’s in the production of it. We’ve got pyro and music. The set is sleek, but still kind of dark and a little ominous. They create the vibe that there’s going to be violence here. There isn’t any, but there might be, right? That’s what I think is being produced.

The first episode of Arena has a lot of game show elements like trivia challenges. What’s the reason behind these games in an esports show?

I love Double Dare. I love Wheel of Fortune. I love all types of game shows, so being able to have trivia elements is fun. We’re experimenting with different things. We have a really good group of people at G4 who have a lot of fun, ridiculous ideas. Someone will raise their hand like, “We want to try this.” and we’re like, “I don’t know if that’s going to work, but let's see.”

With this being a re-envisioning of a show that had so much love before, I didn’t want it to be the same thing. I never believe that if you’re trying to do the same thing as somebody else, it can’t be yours or that it will be as good. So we’re trying to take certain things, update them, and add new elements hoping there will be things that stick. By the end of the season, [we hope] we’ve got every piece fine-tuned to how we want it. We’ve got this great audience, so I hope they give us good feedback on what they like and don’t like so we can change as we go along. I believe, as we go through the season, we’re gonna see more video game stuff.

What’s the reason for the monthly format?

We want it to feel like more of an event, like a pay-per-view. And it gives us a chance to get more time and people involved. It’s kind of hard for people’s schedules, and my schedule which I’m all over the place. So to say to streamers and athletes, “Are you free in October for a day?” more people have the option to say yes. And we can line up more games and more people to be there. It makes it a lot easier on us and gives you that breath of fresh air like a pay-per-view.

What games are you hoping to spotlight on Arena?

Honestly, it depends on what licenses we can get. That's the hardest part. At G4, we're doing a very interesting thing. We are creating for YouTube, Twitch, and TV. If we were just on the internet, we could use a lot of games. Once we cross to TV, now there are things that come into play. So I'm not sure. Another reason we splice it monthly is that we want to make sure we're getting licenses for games people want to see, that players want to play. We're pioneering a new way to present content all across G4.

Do you think there’s a future for esports to look like sports entertainment, like the pageantry and rivalries we see in WWE?

I think it can be more like sports entertainment. I think they can also be buttoned up. If it turns one way, I don't think it has to shun the other side completely. I think that things like the LCS and the LPL have an audience that does enjoy that type of buttoned-up presentation. But, did you see when the NFL played games on Nickelodeon last season? There’d be a touchdown, and slime goes everywhere?

Yeah, that was fun.

It was a good time! People may not like football, but they might watch that and go, “Oh, this is great.” I think [esports] can be both, just presented in different ways to bring in different audiences. The top League of Legends player might not want to see ridiculous stuff, but it might be good as an entry-level thing for others. There are enough games and enough people. I don’t think there’s a ceiling for esports. I think it’s just getting started.

Arena airs new episodes on G4TV’s Twitch, UpUpDownDown on YouTube, and on G4TV.