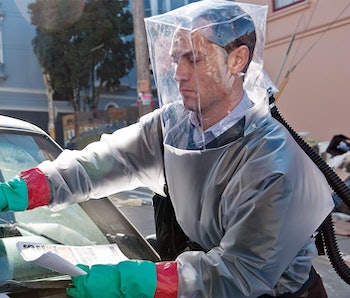 When Steven Soderbergh's Contagion first released in 2011, it felt like a thrilling but farfetched pandemic disaster. But as paranoia surrounding the coronavirus spread in January, online search interest in Contagion rose as the film climbed to the top of iTunes' movie sales charts.

So just how realistic is Contagion, and how relevant is it to the coronavirus? Will watching this movie only increase paranoia surrounding the disease, or will it help the world prepare for what might eventually become an even more widespread pandemic?

Praised for its scientific realism back in 2011, Contagion follows an ensemble cast at all levels of the pandemic: regular people from around the world, Center for Disease Control employees working to limit the spread, members of the World Health Organization tracking its origins, and scientists working on a vaccine.

It begins with Beth Emhoff (Gwyneth Paltrow), a woman who returns home from a Hong Kong business trip with what she assumes is a cold. When she dies abruptly, it marks the beginning of a worldwide pandemic later labeled Meningoencephalitis Virus One (MEV-1). Scientists identify that the virus contains genetic material from pig and bat viruses, estimating that 1 in every 12 people will become infected if exposed to any fomites (contaminated objects), and that up to 30 percent of those people will die.

Contagion provides a compelling look at the absolute worst-case scenario of what could happen, but is the coronavirus as much a threat as MEV-1?

The immediate and resounding answer is a firm no. Contagion takes a realistic approach to what might happen if a disease like MEV-1 did exist, but in the simplest terms possible, MEV-1 is so much worse than the coronavirus.

The mortality rate of the two diseases is also not comparable whatsoever. As of February 7, Netherlands newswire BNO News estimates 639 deaths with 1,564 recoveries and 31,532 total cases of the coronavirus worldwide. That's only about 2 percent of all cases leading to death, compared to a fatality rate somewhere between 25 and 30 percent for MEV-1.

As the levels of infection for the coronavirus and death tolls rise in the coming weeks and months, the eventual numbers won't be anywhere near what we see in Contagion.

The film is structured in chronological fashion, frequently showing "Day 12" or "Day 35" to indicate how far into the pandemic we are. In barely over a month, 2.5 million Americans die as global casualties reach over 26 million. The rate of escalation is sped up drastically when compared to actual mathematical models of such a disease with the potency communicated within the film.

No matter what happens with the coronavirus, even if it infects the same number of people as MEV-1 eventually, far fewer people will die.

Society likely won't break down in the real world like it does in Contagion either, but there are some striking similarities between what happens in that movie and what's already occurred in parts of the world affected by the coronavirus.

The coronavirus has already been declared an international public health emergency that's led to citywide quarantines and total airport shutdowns. CDC scientists are also scrambling to develop a cure based on what little they know of the virus' origins. Much of this resembles the plot of Contagion, and that's no coincidence.

“On one hand, someone might say, That’s uncanny!” Contagion writer Scott Burns told The Hollywood Reporter in February. “But I’m not that surprised because when I spoke to experts in this field [while researching], they all said to me that it’s not a matter of if but a matter of when. What I learned from these scientists is that these things are going to happen.”

As THR points out, both diseases originated in China, spread rapidly, and originated with animals. The going theory is that the coronavirus involves bats and maybe snakes, and in Contagion, it's a bat and a pig. Burns notes that part of their motivation for making Contagion to provide a cautionary tale for viewers on what they should do for any type of outbreak, even the annual flu.

"Wash your hands often and don’t go out if you’re sick," he says.

Contagion opens on a montage of people doing mundane things like grabbing doorknobs, steadying themselves by touching the poles on a bus, or shaking hands. The camera zooms in on peoples' hands to emphasize the frequency of contact.

“The average person touches their face three to five times every waking minute," one character notes in Contagion. "In between that, we’re touching doorknobs, water fountains, and each other.”

These aspects of the story are factual — people do touch objects and their own faces far more often than most of us realize. All it takes is for one sick person who didn't wash their hands to touch a doorknob, and suddenly dozens of other people are infected. Extrapolate that out over time, and we're talking a huge number of infections.

Take the necessary precautions to prevent infection, but there's no need to worry about a pandemic like the one in Contagion. Then again, you might want to hold off on rewatching this 2011 classic for the moment.