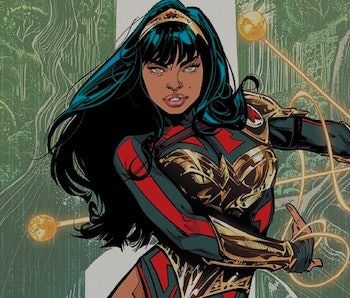 At one point, the DCTV universe was geared to include a Latinx superhero. In 2020, the CW approved a development order for Wonder Girl, a series that would follow the adventures of heroine Yara Flor. It would make Wonder Girl the first-ever Latinx superhero to headline a DC Comics show, joining The Flash, Batwoman, and Superman & Lois on the network — even though the character had not yet made her debut in the comics at the time of the announcement.

Here’s everything we know about what Wonder Girl could have been had it happened at all.

Who is Wonder Girl in DC Comics?

Multiple characters over the decades have claimed the Wonder Girl moniker, but it started as a reference to a teenage Wonder Woman during the 1950s. However, the title is most closely associated with Donna Troy, Wonder Woman’s younger sister, first introduced in 1965’s The Brave and the Bold #65.

Donna went on to be an important member of the Teen Titans, a superhero team made up of former Justice League members’ sidekicks. Wonder Girl has also been used by Cassandra Sandsmark, the daughter of the Greek God Zeus and a mortal archaeologist who became Wonder Woman’s sidekick in the late ’90s. However, Cassandra is later rewritten as a thief-turned-superhero during DC’s New 52 revamp, which reimagined a lot of characters and the mainstream continuity.

Flash forward to Yara Flor’s Wonder Girl. The character is set to make her debut next year as a part of a miniseries that will explore Yara as the future’s next Wonder Woman. As the daughter of an Amazonian warrior and a Brazilian river god, Yara (an adult in the comics) will discover that she has powers and will take up the mantle of Wonder Woman in the fight against an evil threatening global destruction. Sounds like an average day in the life of a superhero.

Is the CW moving forward with Wonder Girl?

Unfortunately not. In February 2021, Wonder Girl’s intended showrunner Dailyn Rodriguez (Queens of the South) revealed that the network had not picked up the show.

“I was very proud of the script I wrote,” she added. “Wish I could’ve shared the world I created, but unfortunately, it wasn’t meant to be.”

Given that development on the series started in November 2020, it most likely would have made it to TV in 2022 if it hadn’t been canned.

What could have been the plot of CW’s Wonder Girl?

Assuming that the series would have detailed Yara’s origin story (as most superhero shows are wont to do), the first season would likely have followed her transition toward becoming Wonder Girl.

Who was in the cast of Wonder Girl?

No one had been cast in either the titular role of Wonder Girl/Yara Flor or any supporting roles when Wonder Girl was canned.

Is there a trailer for CW’s Wonder Girl?

As Wonder Girl was only in development when the network chose not to move forward, there is no footage of it for a trailer, teaser, or even a sizzle reel. Yara Flor remains purely on the page as a character for now.