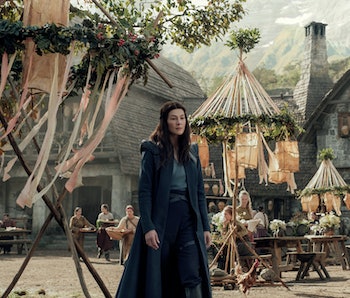 This article about Season 1 of the series The Wheel of Time was originally published on December 6, 2020 and updated on January 2, 2022 following the release of the season on Amazon Prime Video. Read on for the original article, with some new changes to reflect the latest updates on this topic.

Move over, Lord of the Rings; there’s a new high fantasy in town. The Wheel of Time arrived on Amazon Prime after years of being stuck at a development impasse. Based on the best-selling book series by Robert Jordan (whose real name was James Oliver Rigney Jr.), the fantasy show adapts the sprawling mythology of the novels, similar to what Lauren Schmidt Hissrich did with The Witcher on Netflix.

What was planned to be a series of six books evolved into 14 published works, all set in a world unbound by time — the past and future exist simultaneously. In a statement, Head of Amazon Studios Jennifer Salke says that she felt it was the most opportune time to adapt the beloved novels.

“The Wheel of Time is endlessly fascinating and resonates hugely with fans as one of the best-selling global properties, and we were drawn to its timely narrative featuring powerful women at the core. We’re thrilled to extend our relationship with devotees who’ve found the book series transformative and welcome new ones by bringing it to life on Prime Video for viewers worldwide.”

Here’s everything we know about Season 1 of The Wheel of Time, including its release date, plot, and cast.

When was the release date of The Wheel of Time Season 1?

The Wheel of Time Season 1 premiered on November 19, 2021. Like some of its other series, Amazon opted for a “hybrid” approach to releasing their episodes. Three of the eight Season 1 episodes dropped on November 19, with the rest airing weekly after that.

What is the plot of The Wheel of Time on Amazon Prime?

The series follows Moiraine, a member of the mysterious all-female group known as the Aes Sedai. Along with five companions (as opposed to six in the original books), Moiraine sets off on a journey of discovery and adventure. Moiraine believes a young man from a rural hamlet, Rand al’Thor, is the reincarnated form of a legendary hero known as the Dragon who is foretold to save the world or leave it in ruin.

Who is in the cast of The Wheel of Time?

Is there a trailer for The Wheel of Time?

Yes! An official trailer was released in November 2021, only a week before the series premiered. You can watch it below.

Has The Wheel of Time been renewed for Season 2 on Amazon Prime?

Yes! In May 2021, six months ahead of the Season 1 premiere, Amazon announced it had already renewed The Wheel of Time for a second season. A release date has yet to be announced.

The Wheel of Time Season 1 is currently streaming on Amazon Prime Video.

This article was originally published on Dec. 6, 2020