Wookiee of the Year 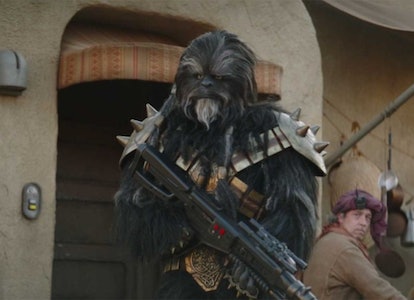 Wookiee bounty hunter Black Krrsantan added a fearsome threat to the Hutt Twins’ claim to the Tatooine throne in The Book of Boba Fett. But for Star Wars comics fans, there’s more to this black-furred gladiator than meets the eye. Within the comics canon, Black Krrsantan has a career spanning from the early days of Luke Skywalker’s life to, well, Boba Fett sending him on his way in The Book of Boba Fett Episode 3.

But what happens afterwards? This is the furthest in the Star Wars timeline we’ve seen him, but the comics may provide the answer.

Early in Black Krrsantan’s life he was forced to escape the Wookiee homeworld of Kashyyk. Looking to make a living, he sought out the Xonti brothers, who ran a pit fighting ring. While the other fighters were bought from slavers, Black Krrsantan volunteered so he could learn how to fight.

After establishing himself as one of the fiercest warriors in the pit, Black Krrsantan shifted his career to bounty hunting. He was even hired by Jabba the Hutt to bully Owen Lars into paying a water tax. Then Darth Vader requested two of Jabba’s best bounty hunters, and Jabba provided Black Krrsantan... and Boba Fett. So these two characters have some history, even if neither acknowledged it.

Black Krrsantan’s best known adventures have been at the right hand of Dr. Chelli Aphra, rogue archaeologist. Along with torture droid Triple Zero, Black Krrsantan assisted Doctor Aphra throughout her adventures, but was quick to turn on her when Darth Vader put a bounty on her head.

That’s the last we see of Black Krrsantan before he appears in The Book of Boba Fett. When Boba lets his would-be murderer go, he gave him some words of advice: “Take it from an ex-bounty hunter, don't work for scugholes.” Considering all of Black Krrsantan’s past employers: Darth Vader, pit fighting bosses, and three different Hutts, there’s plenty of scugholes to choose from.

The only boss who really respected Black Krrsantan was Doctor Aphra. So if he wants to follow Boba’s advice he can either go back to working with Doctor Aphra, or he could try and find his way in the world without a boss.

If he goes back to the Doctor, we could be one step closer to her introduction into live-action canon that fans have been waiting for. But, like Ahsoka’s appearance in The Mandalorian, it would be a significantly older version of the character than we’ve seen before.

The self-employed route worked for Mando and Boba Fett, so maybe Black Krrsantan could do the same. After a lifetime working at the whim of others, maybe it’s time for him to forge his own destiny.