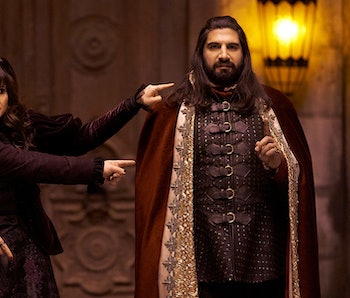 What We Do in the Shadows has officially been renewed for Season 3 on FX. And while the magic of that original vampire mockumentary written and directed by Jemaine Clement and Taika Waititi translates beautifully to the small screen, I'm here to tell you there's no need to watch the movie first before diving into the excellent series.

I didn't see the film before watching the show. I just never got around to it. (Perhaps it was the vampire fatigue at the time.) Then, along came quarantine binging, so I dove right into the pilot episode with very little information or backstory beyond the basic premise. And reader, I fell in love.

What We Do in the Shadows follows three vampires — Nandor (Kayvan Novak), Nadja (Natasia Demetriou), and Laszlo (Matt Berry) — living in modern-day Staten Island. They pay rent, bicker about house rules, and they occasionally feed on humans at night. Their housemates include Guillermo (Harvey Guillén as Nandor’s vampire familiar) and Colin (Mark Proksch as an energy-sucking creature who looks like the average human in comparison to his traditional vampiric cohorts). Like the movie, the show is a mockumentary, so the characters speak straight to the camera about their lives.

The mark of any good adaptation is knowingly introducing its world to an audience unfamiliar with the source material without straying too far from what made What We Do in the Shadows stand out in the first place. The TV show is funny, the characters memorable, and my new passion for the series isn’t at all hampered by my lack of film knowledge.

What We Do in the Shadows’ pilot cleverly sets up the show, introduces the characters in comical fashion, and unveils the overall plot for the season. It’s absurd and brilliant and fun. Nadja shouts “Bat!” before turning into one and flying away. Guillermo desperately wants to become a vampire and Nandor can’t take the hint. The vampires don't sparkle in the sun, they just die. The series is spectacularly engaging and wildly funny.

All that said, this isn’t suggesting that viewers who haven’t seen the movie should avoid watching it now, but the series stands on its own merits. If nothing else, watching What We Do in the Shadows on FX has made me want to watch the original film even more.

What We Do in the Shadows Season 2 airs Wednesdays at 10/9c on FX.