'What If...?' is doing one imaginative thing Marvel could never do before 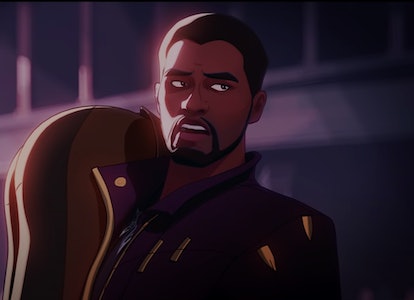 Within the Marvel Cinematic Universe, the lines between what’s “canon” and what’s merely comic lore have always been sharply drawn. But thanks to the introduction of both the multiverse and What If...?, such distinctions are getting blurrier.

What If...?, a franchise that usually safeguards its canon, suddenly has the freedom to explore not only endless narrative possibilities but countless art styles and aesthetic experiments — all thanks to the show’s animated format.

Animation is the biggest difference between What If...? and the MCU shows that have come before it, from WandaVision to The Falcon and the Winter Soldier to Loki. But the animated storytelling on display in this show is a far cry from Saturday morning cartoons.

“When we showed it to Kevin, we barely got through the pitch. He just said, ‘If it looks like this, I’m in.’”

While it could be easy to see this series as an adaptation of the What If...? comics in streaming form, in execution it feels more like an animated adaptation of live-action films. Director Bryan Andrews chose the look of the series for that very reason.

“In animation, you lose a little bit of connectivity, and we really wanted to feel like it's a riff off the movies themselves — just in a different medium,” Andrews exclusively tells Inverse. “We thought about going [with the style of comic artist Jack Kirby], which would also be awesome. But I want to see other things do that down the line. This needed to be its own [thing] so that it could feel as if it’s spun out of the cinema as opposed to directly out of a comic.”

Marvel’s previous big-screen outings weren’t the only inspiration for the show’s art style.

“The look came to me from a great old American illustrator, J.C. Leyendecker,” Andrews says. “I’ve always been impressed by his stuff. It's so magical and so idealized and just glorious in its appearance. Ryan Meinerding, the god of Marvel characters, was also a fan. When we showed it to Kevin [Feige], we barely got through the pitch. He just said, ‘If it looks like this, I’m in.’”

But a look is nothing without a heartfelt story to go along with it. For that, Marvel turned to head writer A.C. Bradley. For Bradley, a project like What If...? turned out to be the ultimate sandbox.

“The beauty of What If...? being an anthology is that we were able to play around a lot with genre and tone,” Bradley tells Inverse. “Hopefully, the audience will be excited to see these characters in new ways that they haven't seen before.”

Toying with genre conventions isn’t an unfamiliar concept for the MCU. Like the movies, What If...? tells stories about comic book characters, but the series stretches this to the extreme, depicting a heist, a spy thriller, and the promise of some supernatural stories.

What If...? stories are also different from anything else Marvel has made given their half-hour runtimes. While the narrative possibilities for What If...? episodes are as infinite as the multiverse itself, the stories each chapter tells must be punchy and compact. This meant many pitches had to be left on the drawing board.

“You guys are in for one hell of a surprise.”

“There was an idea that died on the vine early on,” says Bradley. “I kept trying to pitch a big, romantic, space-meets-the-Odyssey, big angsty romance-y story that I never got the opportunity to write, mainly because it's too big of a story to tell in 30 minutes.”

That wasn’t the only episode idea to end up tucked back into a filing cabinet.

“We started off at 30 ideas and whittled it down to 10,” says Bradley. “We made sure that there was something for everyone, and in Season 2, we went back to some of those original ideas and then came up with some more. I think you guys are in for one hell of a surprise.”

The 30-minute runtimes can be considered a blessing in disguise. Though half-hour episodes were criticized in shows like WandaVision, these limitations mean What If...? has been constructed with brevity in mind. Its pacing is practically immaculate, never too rushed or cramped. Each story has room to breathe without overstaying its welcome or making the story feel like more than what it is: a brief look into what could have been.

The fleeting nature of these stories permeates every detail of the production. The voice acting — whether it’s Hayley Atwell serving badassery as Captain Carter or the late, great Chadwick Boseman as a wise-cracking T’Challa Star-Lord — exudes the sheer joy in trying something new. Just once these actors can deviate from the norm and try something new.

As a result, What If...? feels like Marvel’s spirit week: a celebration of the creativity of its all-star team, unhindered by adherence to larger-scale narratives and set gloriously free to dream big.