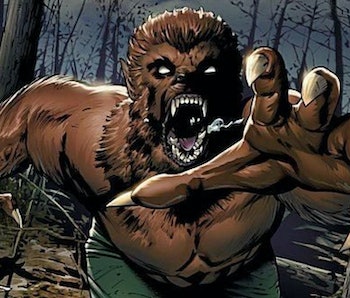 Werewolf by Night has the potential to be the most unique of Marvel Studios’ Phase 4 projects.

The upcoming Disney+ special stars Gael Garcia Bernal as Jack Russell, a.k.a. the Werewolf by Night. Early rumors suggest other Marvel Comics characters like Elsa Bloodstone and Man-Thing will be introduced as well. If those leaks prove to be true, then Werewolf by Night will dramatically expand the spookier side of the Marvel Cinematic Universe.

In fact, if one new MCU leak is to be believed, then Werewolf by Night may end up earning its Halloween special status by being the most straightforwardly spooky project that Marvel Studios has ever released.

The Leak — A recent post on the r/MarvelStudiosSpoilers subreddit claims to summarize the entire plot of Marvel’s Werewolf by Night. The post allegedly confirms that both Elsa Bloodstone and Man-Thing will have prominent roles in the Disney+ special, as will Paul Thomas Anderson favorite Harriet Sansom Harris as a maniacal woman intent on hunting down Bernal’s Jack Russell.

However, the most interesting claim that the alleged plot summary makes is that Werewolf by Night will be a black and white Halloween special that borrows from classic spooky shows like Alfred Hitchcock Presents and The Twilight Zone. Apparently, the special will even open with an Alfred Hitchcock Presents-inspired prologue in which a narrator tells the audience to prepare themselves for a story full of “chills and thrills.”

If true, that means Werewolf by Night is going to have more in common with this year’s Doctor Strange in the Multiverse of Madness than any other MCU title.

Beware the Full Moon — While you can levy plenty of criticisms against Doctor Strange in the Multiverse of Madness, there’s no denying that the film inhabits a very different space compared to most MCU titles. Some extended sequences dive headfirst into the kind of camp horror subgenre that its director, Sam Raimi, is known for.

From Wanda’s seance-esque dreamwalking ritual to Stephen Strange’s decision to possess the corpse of his own Variant, Multiverse of Madness is full of moments and sequences that are refreshingly spooky and fun. Frankly, the strength of those sequences makes a great case for why Multiverse of Madness probably should have been released as a Halloween movie instead of an early May summer blockbuster.

Fortunately, it sounds like Werewolf by Night may fill the Halloween spot on Marvel’s calendar that Multiverse of Madness could have. In case that wasn’t exciting enough, this leak also suggests that Werewolf by Night is going to truly lean into the kind of campy horror tone that Multiverse of Madness introduced to the MCU. It may, therefore, end up being one of the more experimental and stylistically refreshing projects in MCU history.

The Inverse Analysis — As is always the case with MCU leaks like this one, make sure to take this alleged plot summary’s claims with a massive grain of salt for the time being. Until Marvel decides to release more information about Werewolf by Night, we won’t know one way or the other how accurate this leak’s claims actually are.

That said, if Marvel was ever going to produce a black and white Halloween special, Werewolf by Night seems like the most well-suited property for such a take. Considering just how well-received the moments of camp horror in Multiverse of Madness were as well, there’s no better time than now for Marvel to fully commit to the genre.

Werewolf by Night is expected to premiere on Disney+ in October 2022.