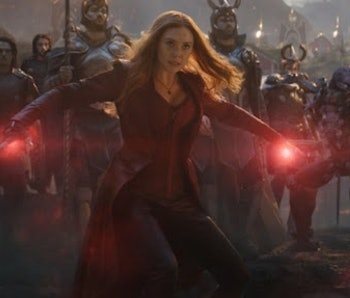 WandaVision will finally unlock the Scarlet Witch’s potential. We know the Disney+ show will be a showcase for Wanda Maximoff's reality-bending powers, and a preview from Marvel President Kevin Feige suggests the series will finally deliver on a major moment for Wanda that was cut short in Avengers: Endgame.

While the Marvel Cinematic Universe boasts physically strong superheroes like Captain America, Thor, and Captain Marvel, Wanda Maximoff may prove to be the most powerful of all. However, her abilities have remained unexplored for the most part, with Endgame being the first MCU film to hint at the full scope of her prowess.

Following Vision’s death in Infinity War, Wanda fought Thanos on her own in Endgame, stripping away his sword and rendering him immobile while he visibly struggled. Wanda’s attack was effortless and she was in full control of her powers, nearly defeating Thanos before being taken down by his ship’s weaponry. However, the moment was only the tip of the iceberg with regards to the full breadth of her abilities.

Speaking with Empire, Feige teased the ways in which WandaVision will address the intensity of Scarlet Witch’s powers and where they came from:

In the comics, Wanda is perhaps one of the strongest mutants alive. She can warp reality and manipulate time, energy, and matter. If the Disney+ series is going to investigate the nature of her powers, it’s possible the Mind Stone may not be the original source of her magic. What’s more, the series could prove that she is the strongest player in the MCU and expand on her attack on Thanos (which was cut too short) by having Wanda take on another big bad during WandaVision’s big finale.

Conversely, if Feige goes the route of Wanda being a mutant, then the confirmation of her powers could open the door for the arrival of the X-Men. After all, some of Wanda’s most fervent comics storylines have been fueled by trauma, and it’s doubtful the Mind Stone is the only cause for such power. Regardless of the X-Men’s potential involvement, however, the exploration of Wanda’s powers could set her up as the most crucial person in the MCU moving forward.

The Inverse analysis — There’s still very little we know or understand about Wanda's powers, but we assume she has the ability to change the reality of the MCU as a whole. We also know the Scarlet Witch will join Stephen Strange in Doctor Strange in the Multiverse of Madness, so it seems likely that she’ll be at full power by then. Either way, WandaVision is only the beginning for this Avenger, and every single villain better watch their back.

WandaVision will premiere on Disney+ on January 15, 2021.