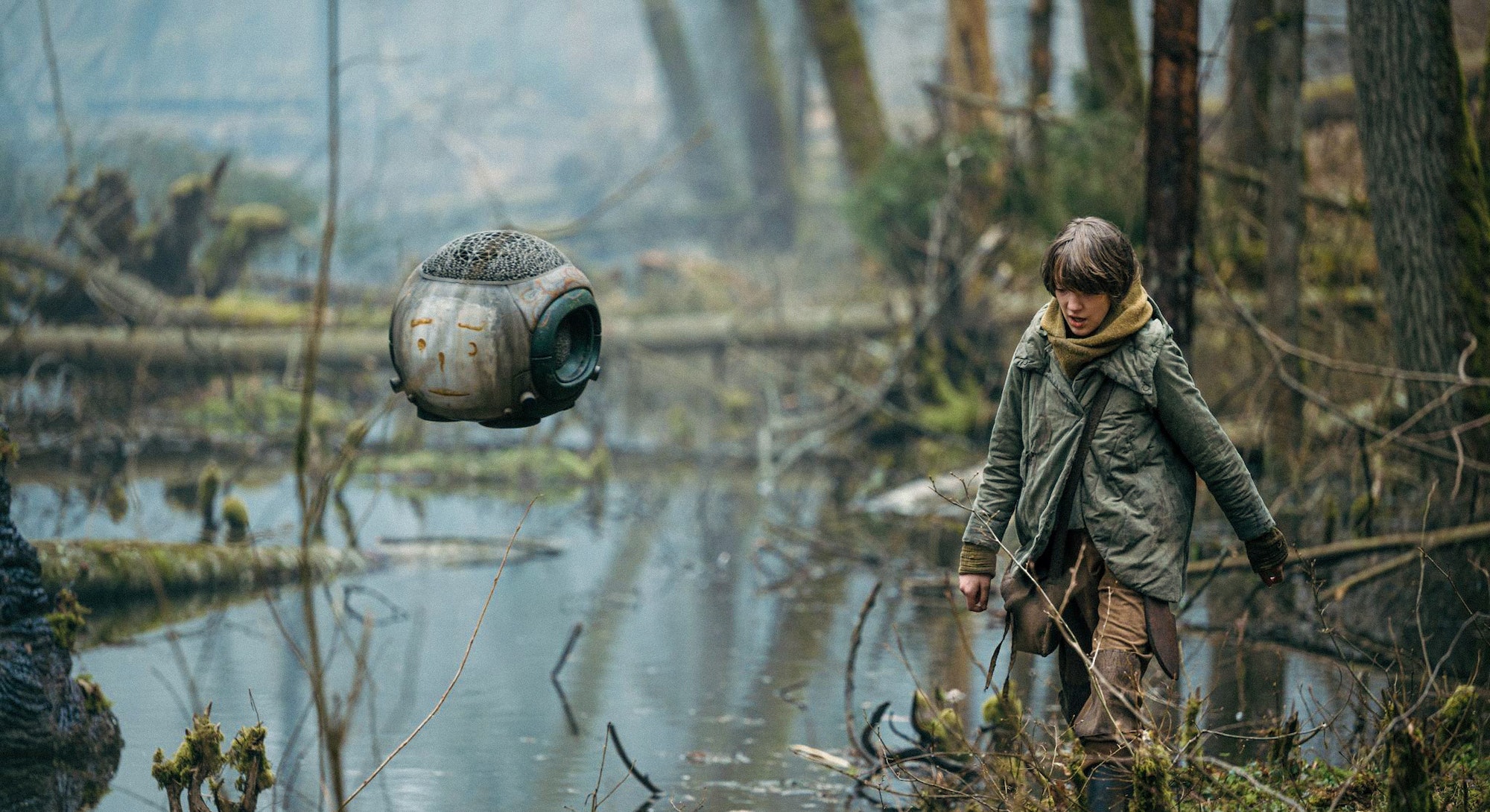 Even when there’s devastation, there is beauty to be seen.

10 years after directors Kristina Buožytė and Bruno Samper released Vanishing Waves, which made history as the first movie filmed in Buožytė’s native Lithuania to receive theatrical distribution in North America, the two turn their cameras back onto the country’s breathtaking brown-green forests in Vesper, out in theaters and VOD on September 30 from IFC Films.

Vesper isn’t exactly a tourism commercial, as Buožytė and Samper make Lithuania look remote and grimy. What actually gives Vesper power is its multifaceted story of survival and trust, and the delicate ways these forces entangle. While clunky in its plotting and world-building, Vesper ultimately succeeds as an elegiac sci-fi with remarkable emotional depth, all packaged in an English-language production with a European arthouse rhythm. As a sci-fi, Vesper is a compelling cautionary tale about our precious ecosystem where the eye-pleasing scenery isn’t gorgeous for its pristine looks, but tragically beautiful in its rotting textures.

Set after Earth has become desolate, humanity lives off scraps. Vesper follows its title hero, a 13-year-old (Raffiella Chapman) responsible for looking after her bed-ridden father, Darius (Richard Brake), who communicates via a floating drone (think of Destiny’s Ghosts, if you’re a gamer). Things get complicated when Vesper finds a strange woman, Camellia (Rosy McEwen), at a crash site who claims she can offer them passage to the “Citadel,” a city of luxury. Jonas (Eddie Marson), Vesper’s neighbor and uncle, chafes with Camellia, considering the protection of his small community paramount.

Vesper isn’t the cleanest movie, visually or structurally. It’s no gorier than any other dark sci-fi, but a multitude of textures become palpable through the screen. Mud, dirt, soup, and synthetic goo swirl across Vesper and give the viewer a sense of consistent dampness. It’s not icky, and Buožytė and Samper aren’t as enamored by tactile sensations as, say, Chloé Zhao. But they successfully make the point that the future doesn’t have to be all sanitized spaceships and chrome weapons. It can be messy.

Structurally though, Vesper is a mess. A wall of words greets viewers, and though its dissolve techniques are novel, it doesn’t change the fact Vesper demands fast study of its minutiae. Plenty of other movies get away with this — both Blade Runner films, for example — but those movies also have the strength and confidence of their visual and narrative storytelling that carry viewers to the end. By comparison, Vesper is just a little too timid, and too often resorts to telling over showing. Other times, Vesper feels so dense that even the most attentive viewer may be left asking questions about the logic of its plot than paying attention to the drama.

Still, there’s a lot to admire about how Vesper unfolds, calling to mind some of the greatest European science fiction. Andrei Tarkovsky’s Solaris feels like an abstract influence. The more recent Aniara by Pella Kågerman and Hugo Lilja and Sputnik by Egor Abramenko do too. Vesper is destined to join its ranks, partly for its design craftsmanship and partly for its intelligent symbolism and hopeful optimism for humanity’s future, despite our bleak outlook.

In the same way humanity can be doomed or saved by people, Vesper is mercifully shouldered by its sympathetic lead. Rafiella Chapman, an exciting young talent, plays a soft-spoken heroine who carries on the tradition of sci-fi leads before her. Chapman’s saucer-pan eyes telegraph a wide range of the emotional spectrum, and the filmmakers take full advantage of her expressive features with empathy-generating close-ups. Seen on a big screen, it’s not hard to root for Vesper, although she’s fully capable of taking care of herself.

By the time the credits roll, you’re left with an inspiring tale that doesn’t champion leaving your world behind for something better, but making the world into the home you dream about — a timely and necessary lesson. It’s also, in some ways, a metaphor for the filmmakers. Buožytė and Samper say the 10-year absence from the screen is due to Hollywood projects coming together and falling apart. It wasn’t until they opted to make a movie developed with Lithuania in mind that they were able to make their welcome return.

Vesper may not be the flashiest, most exciting, or even most enriching sci-fi of the year — Everything Everywhere All at Once continues to loom large — but it’s easily and quietly one of the most unforgettable.

Vesper will be released in theaters and VOD on September 30.